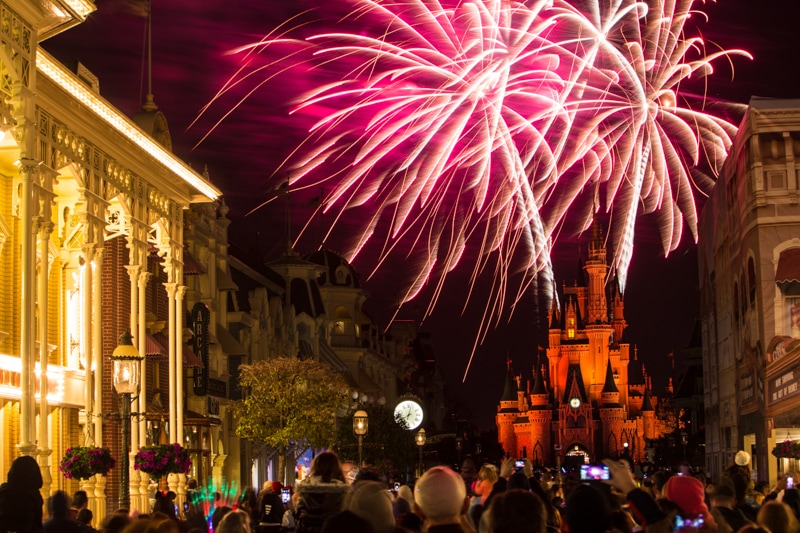 After spending a couple days in Orlando messing around at places like Universal Studios and Merritt Island National Wildlife Refuge, we finally hit up Disney World for a couple days of photography.  The truth is, we had little to no plan of what we wanted to see or do.  All we knew was that we had 2 days to see the area.  We decided to focus on the Magic Kingdom as, from a photography standpoint, this is where the park is truly defined.  I focused on shooting things like street photography, portraits, and then staked out a spot to fire some photos of the Disney World fireworks show.

On the second day, we rolled into Epcot Center which was a bit of a funny place for a travel photographer to visit.  There is a world showcase featuring replicas of places around the world.  I mean, this is where stereotypes are born.  That said, it was a bit fun and wander around comparing the Epcot version of places I’ve been to the real ones.  I also think it’s a really cool place for kids to see, as it reminds them that the world is a big place and there’s lots of diversity and unique places out in the world worth exploring.

Anyways, check out my photography video from Disney.  There are also some images from Disney World and Epcot Center as well.

I’m always a little bit apprehensive bringing my gear into theme parks.  Each park seems to have different rules about photography.  The great news, regarding Disney World, is that they seem to be very welcoming to photographers.  In fact, there are very few rides that they say you can’t bring your camera on.  Moreover, I packed my tripod around and set up all over the park and never once was I asked to move it.  As far as I can tell, there’s no anti-tripod rule in Disney World.  In fact, it seems as if they encourage it.

As far as portrait and people photography, follow the usual ethical guidelines.  Don’t go running around stuffing your camera in people’s faces without permission.  Also, be aware that some parents aren’t going to want their children photographed by strangers, so be sure to ask before photographing and explain that you’re a journalist/photographer first and not just some creep with a camera. 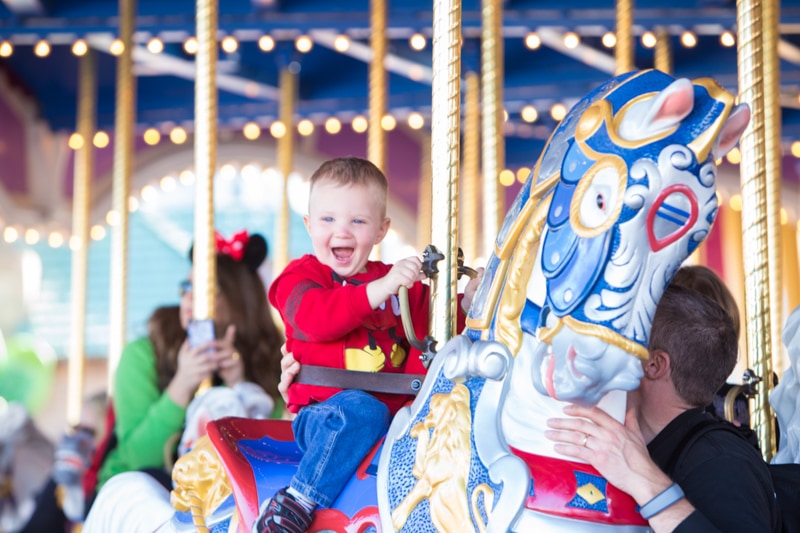 Where to Photograph the Disney World Fireworks Show

Of course, it’s personal preference.  Personally, the spot that I liked was way back at the entrance in the square.  I found a place behind a small garden I could set up.  The reason I liked this spot was because there was no way for someone to stand in front of me.  From there, I just shot my 70-200mm lens up on the tripod and it worked out really well.  If you want to go to the front and get close to the fireworks, it would probably work too.  But, you’d definitely be squeezed in.

What Gear to Pack for Disney World

Personally, I think you can really pack everything.  You’ll definitely want a fast prime lens of some sort to capture the people in the park.  I shot a 50mm f/1.4 to cover that aspect.  You might also want a long lens if you plan on photographing the fireworks from the spot I shot them from.  If you were at 24mm you’d be way too wide.  I’d also recommend packing in a standard walk around lens like a 16-35mm or a 24-105mm.

Where to Stash your Gear

There are lockers right at the entrance to Disney World.  But, note that they’re not that big.  You can’t really pack in a massive camera bag and stash it as you go to wander around the park.  I used a locker and it was big enough to hold my tripod as well as my Epiphanie camera bag.

Here’s a quick assortment of images from this trip to Disney World.  It’s actually a really fun place to photograph.  You get a great assortment of people, some of them dressed up for the experience, which is awesome.  Of course, the fireworks show is great too. 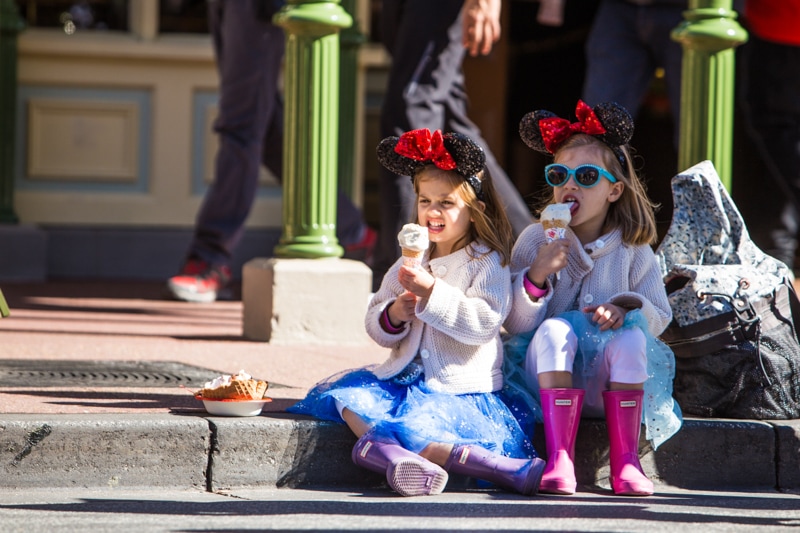 A couple girls enjoy an ice cream break in the park. 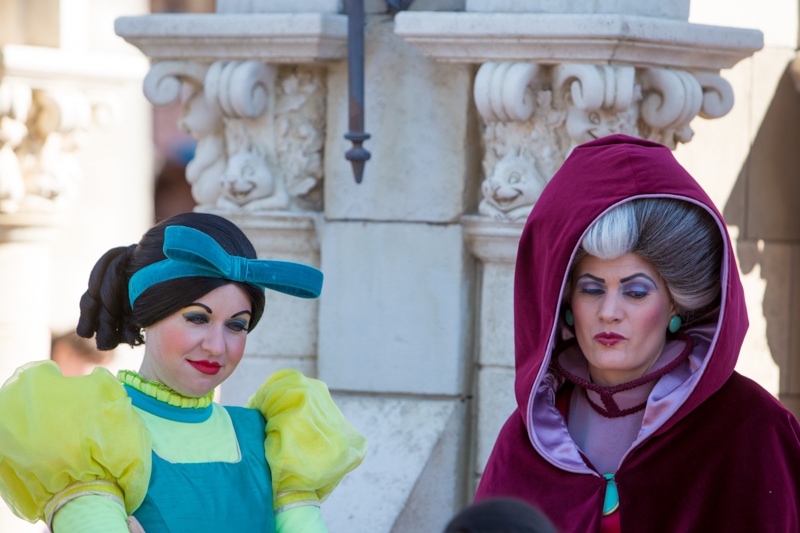 The characters in Disney World are always on their game. They never break character. 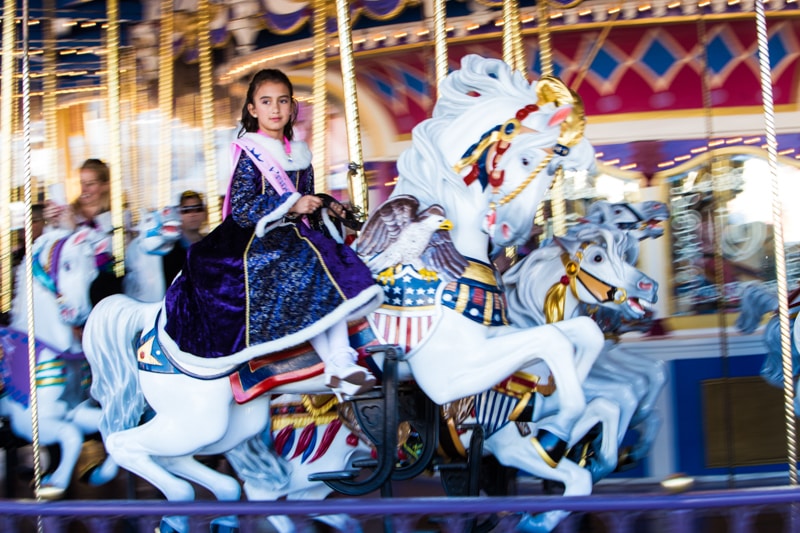 A princess rides the carousal. 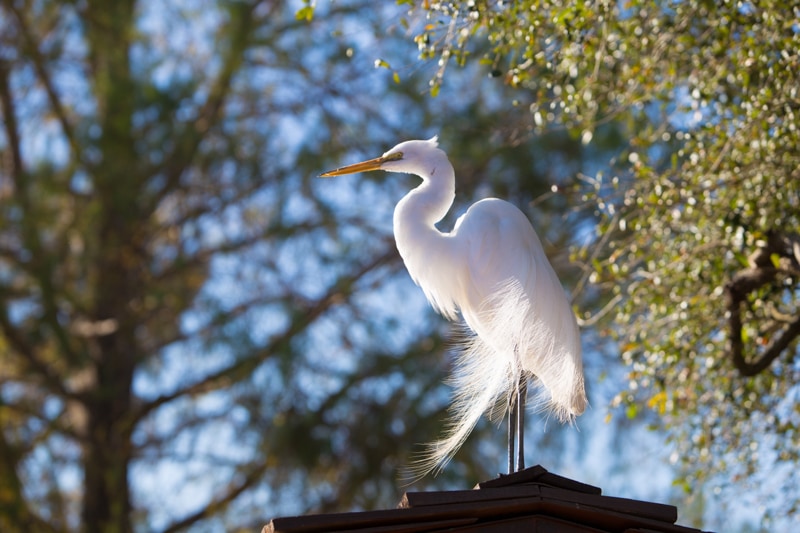 An egret stands on a building in Disney. 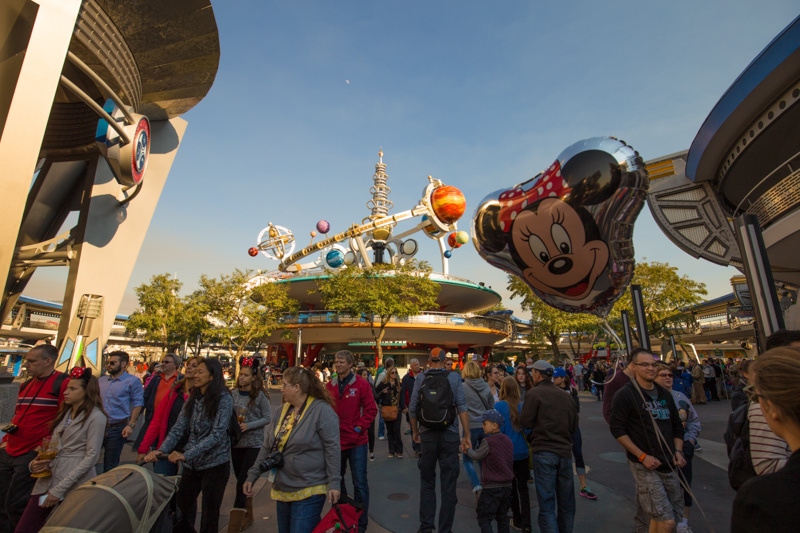 A Minnie Mouse baloon floats above the crowds. 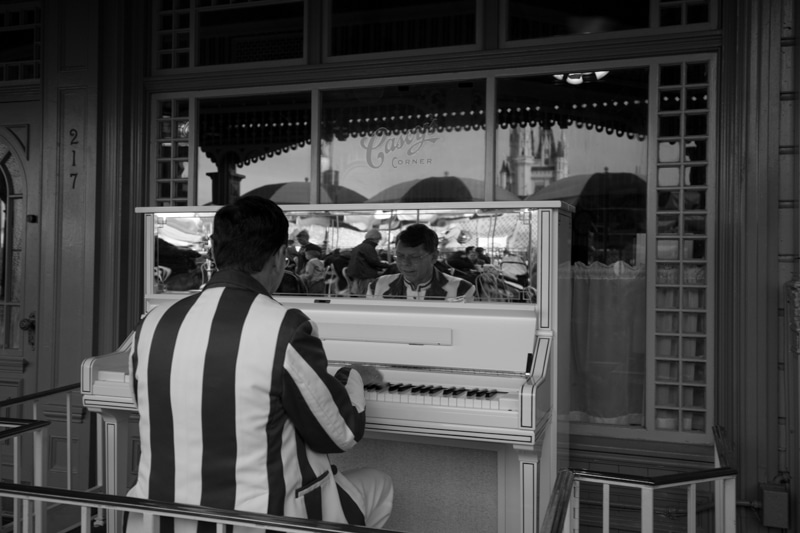 A pianist plays outside the hot dog shop. 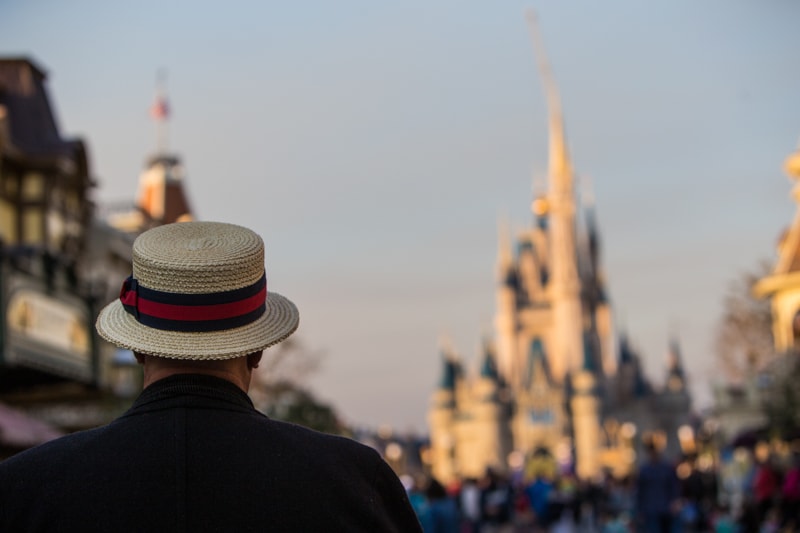 A Disney staff member stars down the boulevard towards the castle. 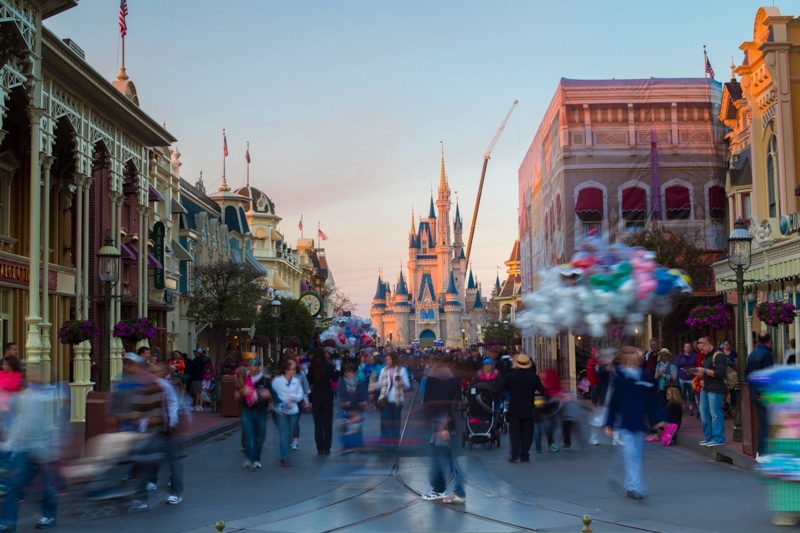 As the evening hits, the crowds along the Boulevard get ready for the parade. 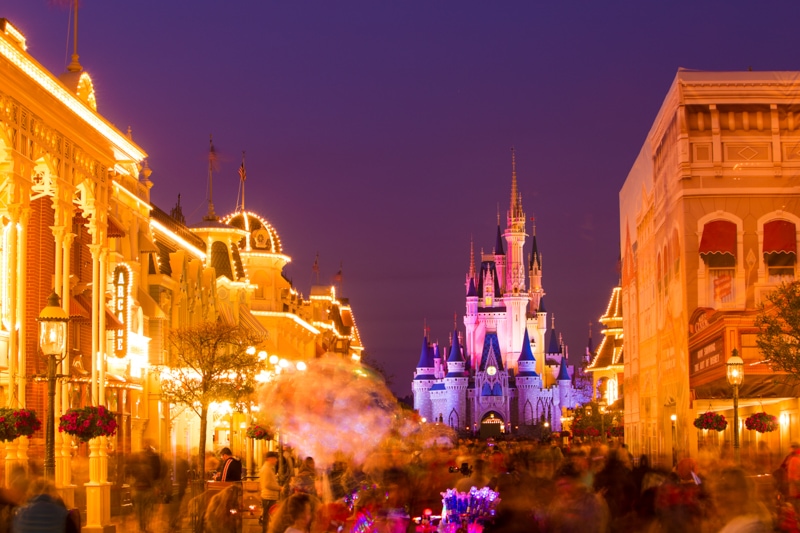 People stand waiting for the fireworks to start. 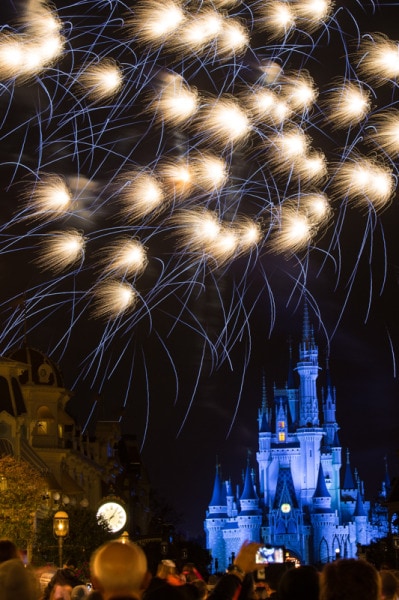 The fireworks show in Disney happens ever night as is really impressive. 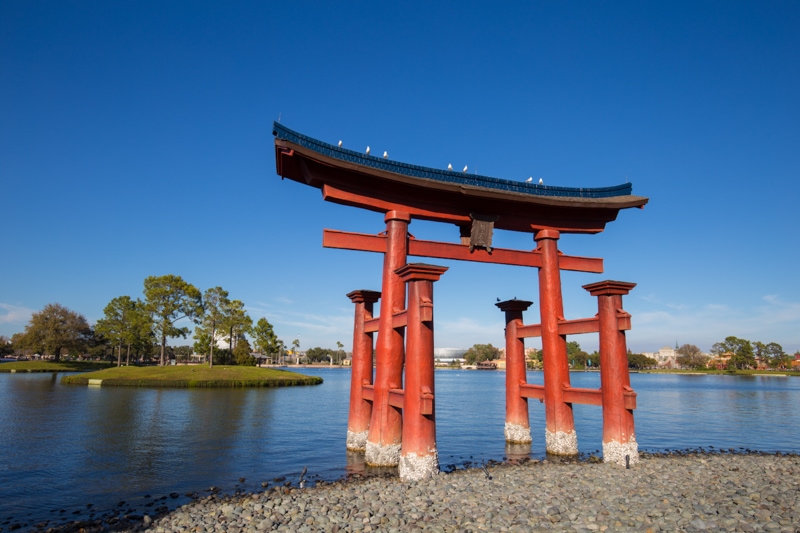 A Japanese gate in the waters at Epcot. 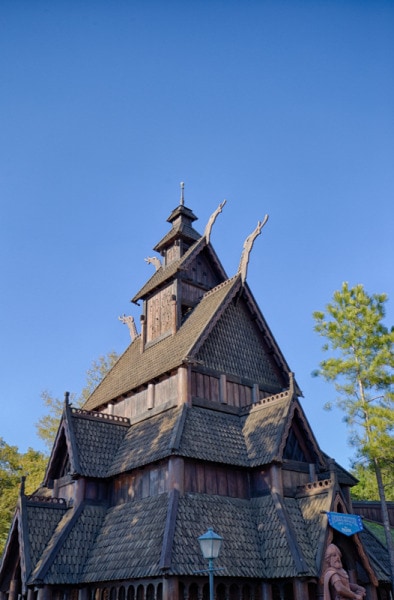 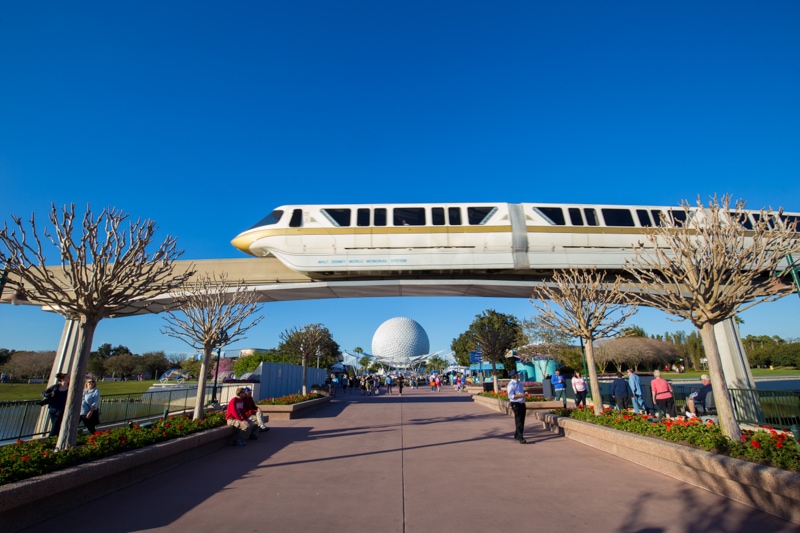 The sky tram crosses the scene at Epcot. 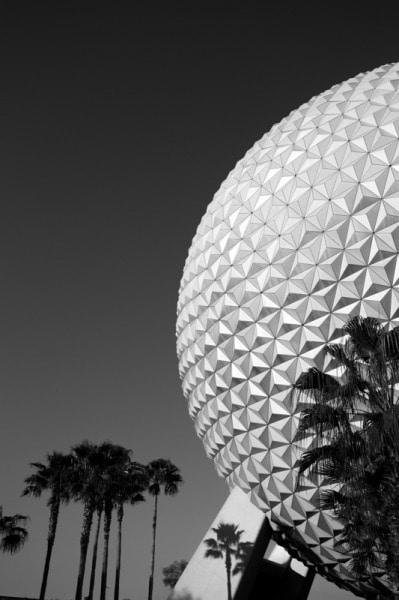 Over at Epcot to see what the fuss is about.

We’re continuing on this big US road trip as we head even farther south in Florida.  In fact, we’re going as far south as the road goes by heading to the Florida Keys.  Then, we’ll be making our way back across America to hit up places like the Canyonlands in Utah and Monument Valley.  Stay tuned.