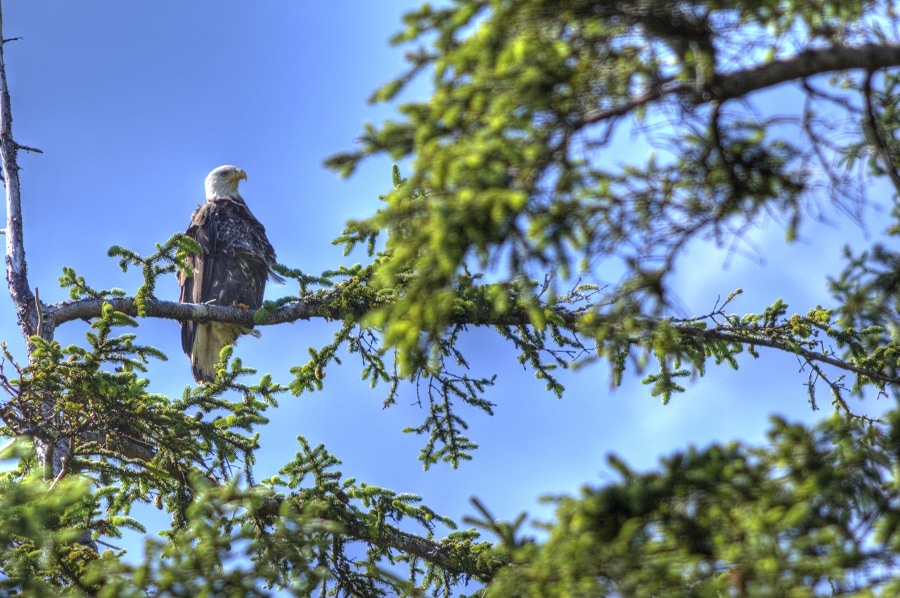 BC Round Up: 28 Days in Photos

I’m almost as sad to end the content of the #ExploreBC project as I was to finish up the tour.  The truth is that the province provided me with so many great bits of content.  Every single day there was a new adventure, each completely diverse and almost all very exciting.  Moreover, the photo opportunities were absolutely incredible.  The most amazing part about photography in British Columbia is that there is a such a wide variety of things to shoot.  One moment you’ll be photographing a beautiful beach, the next wild grizzly bears, and then a stunning city skyline.

To round up my storyline from British Columbia, I have decided to show off a photo from each day of the trip.  These might not be the best 28 photos from the trip, but my favourite from each day.  Just looking over these images I’m sure you’ll be struck by the diversity.  Enjoy!

“I love taking photographs at Butchart Gardens.  The light always seems perfect, and the scenery is lush and plentiful.  I chose to shoot an HDR image of the famous “sunken gardens” in an attempt to create a different type of image from this classic photo angle.”

“Nothing says “Victoria” more than the inner harbour, and perhaps the most distinctive building is the historical Empress Hotel.  Again, this is an image that has been photographed countless times.  Thus, I tried to do something a little different with it.  I got up on the road, set up a wide angle, and waited for a couple cars to stream their lights by.  The combination of the light trails and the great light in the sky that night made for a completely unique image of one of the most photographed buildings in Canada.”

“When I think of lower Vancouver Island, towns like Cowichan Bay are exactly what I think of.  These little villages are quirky, filled with the environmentally conscious, and they all have a stunning setting.  I shot this photo through a window overlooking the bay.  I was drawn to the window because it looked like a ship’s view.”

“For me, there are few things that can beat a good day on the links.  This shot was taken at Fairwinds Golf Course just outside of Nanaimo.  What I love about this photo is the fact that I captured the ball in motion, but also because in the background you can see a deer in the photo, showing how close to nature you get playing courses like this in BC.”

“As soon as we arrived in the town of Ucluelet I knew I would like it.  It was a natural playground, and my favourite type of destination.  I shot this photo from aboard a kayak with a GoPro wide angle camera.  I love the mood of the photo as well as the power it seems to have.”

“The moment we showed up at the lighthouse just outside of Ucluelet I knew I was going to have a field day with the camera.  The waves were crashing into the rocks pretty violently, which actually gives more peacefully looking photos believe it or not, and the sky was brilliant. I could have chosen one of about 12 stills I loved from this shoot, but this is my favourite of them all… I think.”

“This was the first time I had been on my home soil for Canada in about 4 years, so I was very excited to be a part of the festivities.  Around 10pm I set up on a perch above the harbour in Tofino to snap some shots of the fireworks being set off from the barge.  It was a great experience.”

“The thing I really respect about British Columbia is their wiliness to go local.  Local products seem to be the best selling no matter where you go in the province.  Tofino Brewing Company is a new product, but one that deserves a lot of respect in itself; and to top it up they make a great beer. As for the photo, I love the simplicity of the shot, sometimes less is actually more.”

“This was the first of many wild bears we saw in British Columbia.  This little cub was straggling behind mama quite a bit because he/she was too busy playing with twigs and sticks.  When we first saw this bear we actually thought it was a cat, but as we got closer it became obvious that it was just a really young cub.”

“Day 10 was maybe the most difficult day to select just one image from.  The day was so packed with activity and great photo ops. We spent the morning in a float plane, and then I spent the evening at Elk Falls taking some snaps.  This image was my favourite from the shoot.  I really like how the water looks alive.  I also like the fact that the image looks like it was taken from in the river itself.  And if you saw me shooting that day you would know that I basically was.”

“This is another difficult day to select a photo from, but this one has a little bit more meaning to me than it does as just an image.  I took this in the gift shop of the U’Mista Cultural Center on Alert Bay.  This museum was the place that reminded me that we have some absolutely beautiful cultures right here in Canada, and that we don’t always have to travel around the world to find them.”

“The photo of this food isn’t actually my favourite photo of the day.  However, it gets the photo of the day because it was my favourite meal for the entire trip.  The steak was out of this world good.  As I told the waitress, this was among the best steaks I’ve had in my life and I’ve spent a lot of time in places like Uruguay and Argentina.  It was amazing”

“I spent my birthday aboard a 16-hour ferry from Port Hardy to Prince Rupert.  The inside passage ferry is famous around the world as being one of the most scenic boat rides on the planet.  It is stunning, carving through some of the narrow passages offers some fantastic views including this one that I snapped off from the upper deck of the boat.” 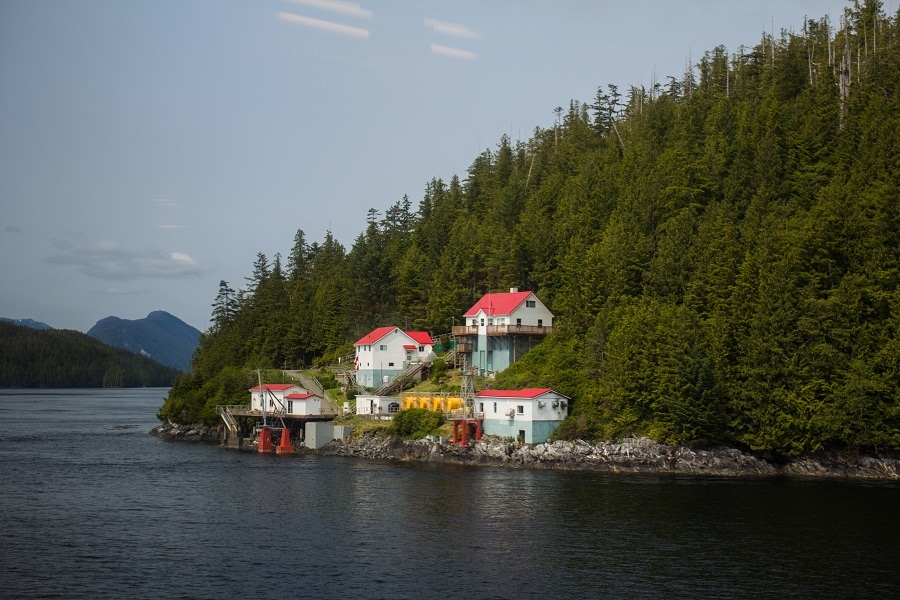 “The truth is I had my fair share of sushi in British Columbia.  It’s not exactly easy to find sushi in West Africa where I’m currently roaming, so I went on a bit of a binge.  The quality of sushi in BC is world class, and we were told that Opa Sushi in Prince Rupert was the best in the province.  Although I preferred one we found in Campbell River, this was also very good!”

“Getting to Haida Gwaii was a dream come true for me.  I never imagined myself getting the chance to explore the Queen Charlotte Islands, but explore I did!  This photo was taken almost immediately after getting off of the overnight ferry to the islands.  I love the raw mood of the photo, and the light couldn’t have been better had it been painted.”

“I try not to do all too much HDR.  I tend to use it when I’m having exposure issues, or if I want to give a classic image a bit of different look.  I took an HDR image of this bald eagle for the later reason.  There are plenty of bald eagle shots around, but few that look like this.  Love or hate HDR, you have to admit that it gives a surreal look to the image.”

“I had never even heard of Khutzemateen Grizzly Bear Sanctuary before visiting it.  However, walking away from it I can confidently say that this should be on every nature lover’s bucket lists.  It was incredible.  We got within about 20 feet of a thousand pound grizzly bear.  How cool is that?”

“This photo was taken near Terrace, BC during a day on the water fishing.  I love natural feel to the image.  I think most photographers will be driven crazy by all the spots and light flare, but for me that captures the moment perfectly.”

“We had to cross through Alaska to get to Salmon Glacier, but it was absolutely worth it.  This is one of the truly impressive natural sites in Northern BC.  The drive along the cliffs to this view point is absolutely spectacular and a must if you’re in the region.” 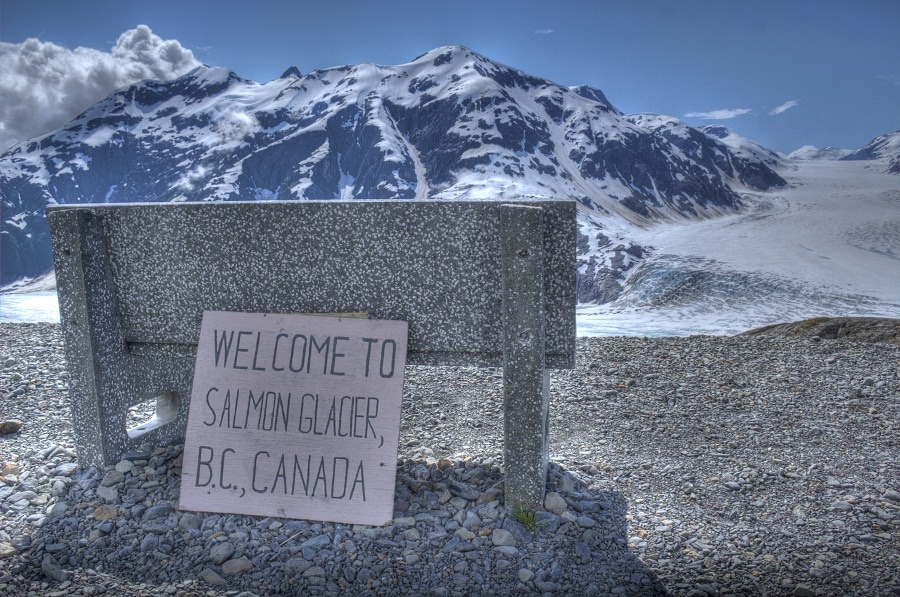 “From Stewart to Smithers the highway is pretty spectacular.  Huge mountains shelter the valley and house glaciers and a host of waterfalls.  As we wizzed through in the car, we often passed people on bikes cruising the highway.  Although it’s not exactly my bag, I can imagine that they had quite a few spectacular experiences on two wheels.” 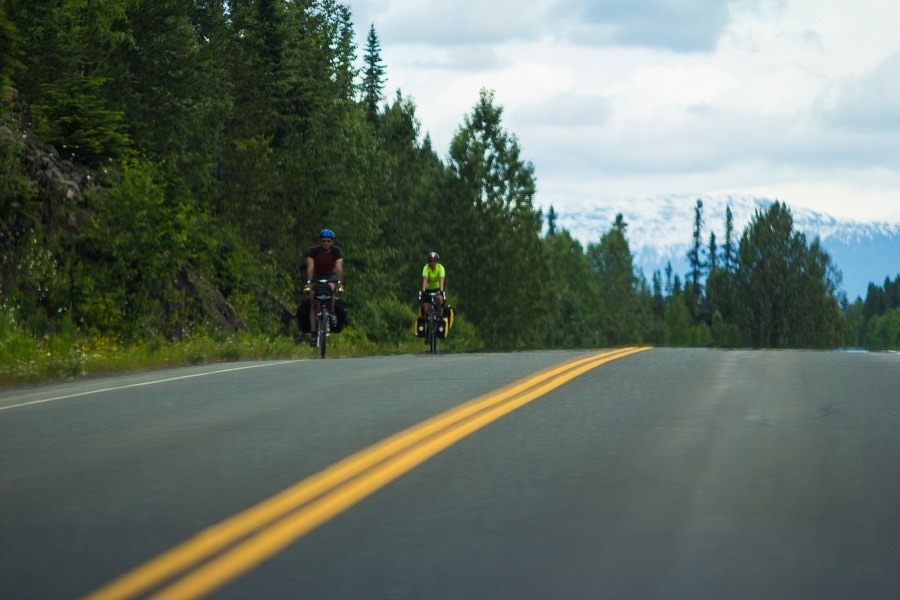 “This was right up there with Khutzamateen as my favourite experience in BC.  It just all seemed to happen so randomly.  There are few sights in the world more impressive than the northern lights, and I feel very lucky to have had the opportunity to see them.”

“Burns Lake impressed me as well.  They have created a massive bike park that is phenomenal and open to the public.  It was one of my favourite outdoor activities on the trip.  I shot this photo of a rider going through a pretty technical section of one of the trails along a cliff with a stunning view.” 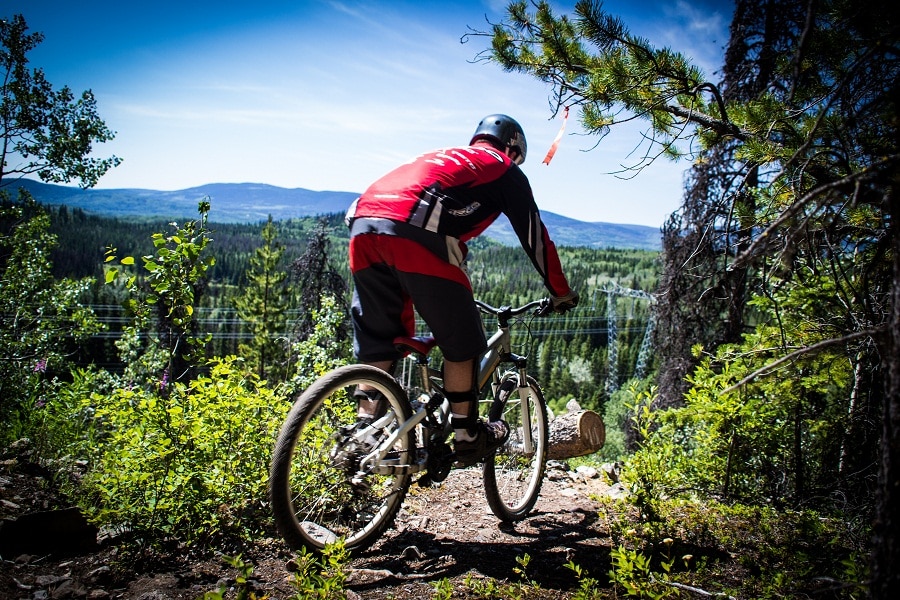 “Outside of Prince George we went on a hike through the Ancient Forest.  Being amidst centuries old red cedar trees is quite the humble experience; and the fact that they tower to pretty extraordinary heights makes the sensation all the more powerful. With this photo I did my best to exude that humbling feel for the forest, and think it turned out quite well.”

“Barkerville was strange.  During the day, it’s home to dozens of actors playing their part as townspeople from the early 1900s, and at night it is completely deserted.  I could the clear skies and deserted town as an opportunity to do some star photography.  And although it was a bit of a struggle, I got some fairly fun images out of the deal.”

Day 26 – Profile of a Blacksmith

“On our second day in Barkerville, I decided to go out and try to capture some of the faces in town.  One of those faces was set in the perfect light for a profile photo.  I snapped this off, and am really pleased with how it turned out.” 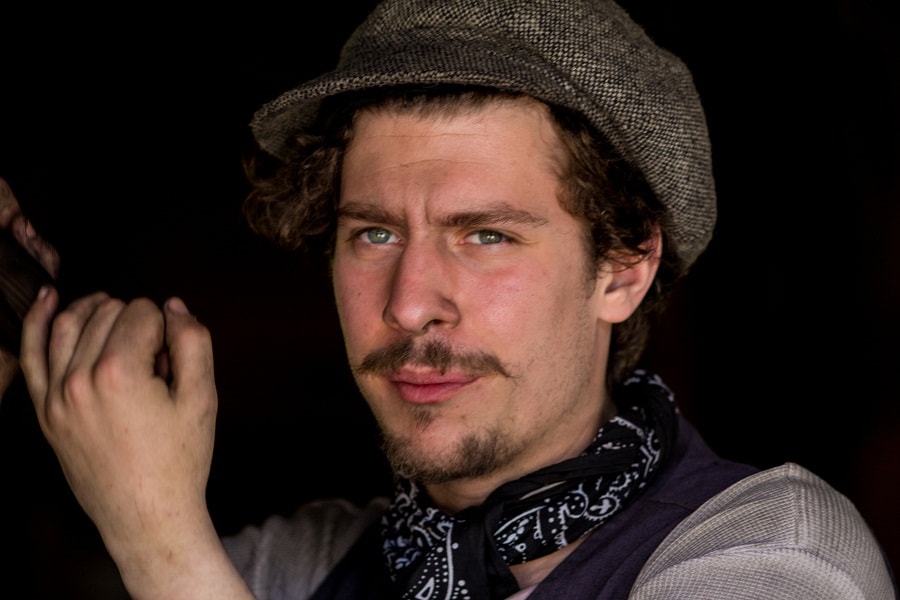 “On day 27, we finally got back to what is very familiar territory to me.  I grabbed this shot along one of my favourite drives in BC: The Duffy Lake Road.  This is actually the point where Duffy Lake drains into the river basin.” 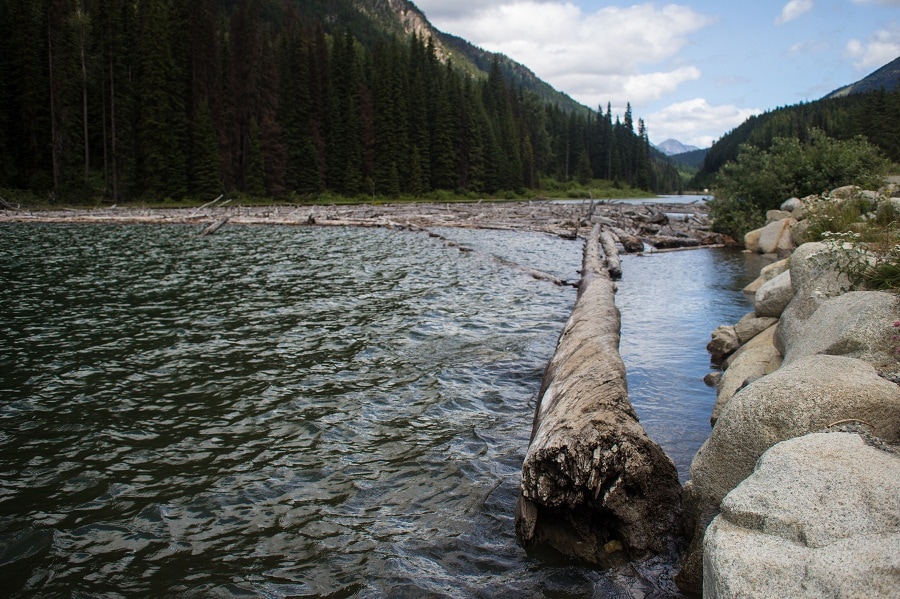 “The last day of the journey was culminated beautifully with a stop at the beautiful Shannon Falls.  I tried to grab a bit of an unconventional angle by shooting from the river below.  I like how it turned out, I just wish the light was a bit better.  Regardless, looking back at all these 28 images, and the other 1,000 or so I took in 28 days, I couldn’t be happier with how it all turned out.” 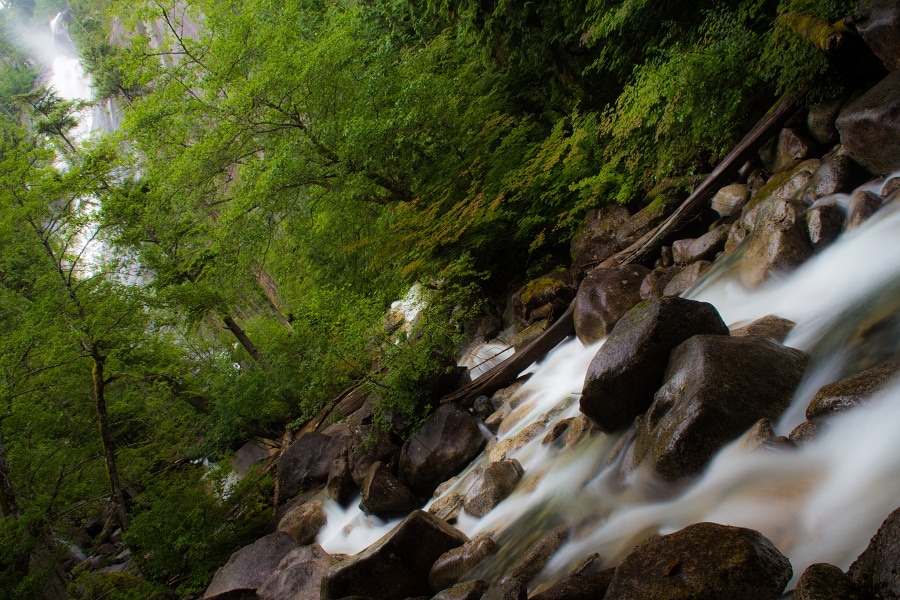 So that’s it! As usual, I’d love to know which your favourite photo is. Which part of British Columbia interests you most?

These photos were taken during the #ExploreBC project. To find out more about it, and British Columbia in general, visit the Tourism BC facebook page: http://www.facebook.com/hellobc