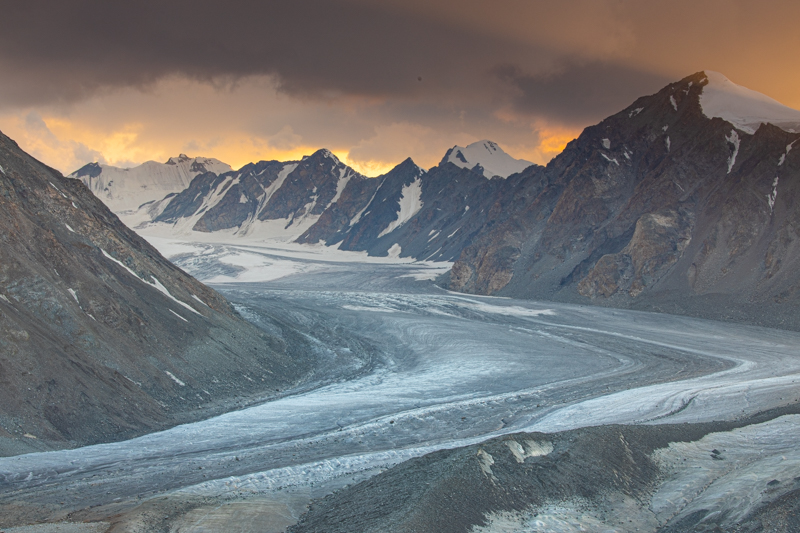 Our trip out west in Mongolia was challenging. We ran into quite a bit of car trouble, there was basically no pavement at all, and the weather changed on us pretty dramatically.  But, overall, it was amazing.  It’s one of those things that we’re all going to look back in a couple of months and just think about how incredible it was.  And the photos from Mongolia came back pretty special too.

So, I thought I’d put together a round up of my favourite images from the trip – even if it was a couple months ago.

Now, obviously you read the post with my photos from the Mongolian eagle hunters (right?) so I won’t include any of those images here.  But, I do want to include some of my images from the night we spent at their camp.  It was a pretty fantastic experience.

We arrived at the camp just at sunset, so we actually got a pretty good photo opportunity right above the settlement.  I was actually pretty lazy so I didn’t bring out my tripod, but rather just handheld a photo with my long lens.

It’s pretty funny, but at the time I didn’t think it was anything too special so I wasn’t worried about sharpness or getting the ISO down. But, once I brought my files into Lightroom, I loved it.  I wish I used a tripod for this photo. But, it’s still sharp and clean, so I don’t mind. 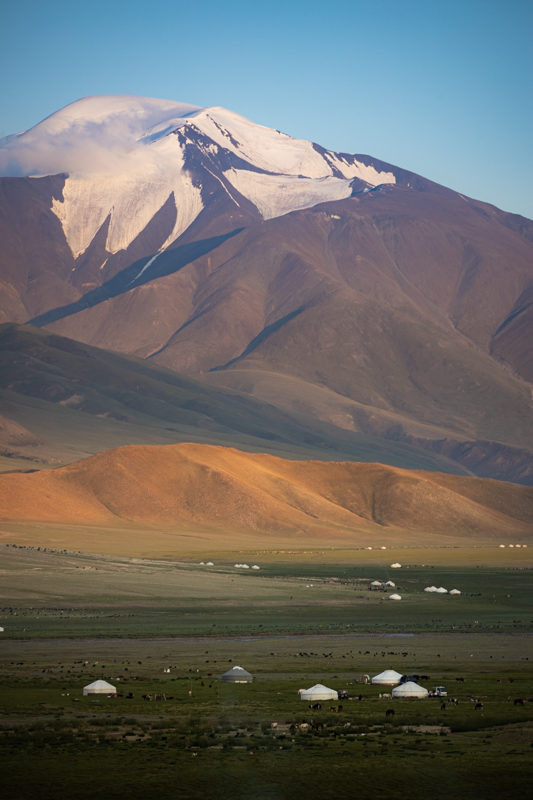 In the camp, the first thing I spotted was this tree.  It was absolutely massive, and a dominant element in the valley.  I just had to photograph it.

Unfortunately, I think the tree is almost too big.  The gers around the tree should give it some scale, but instead they almost look like distracting elements as I just don’t think they’re recognizable enough. 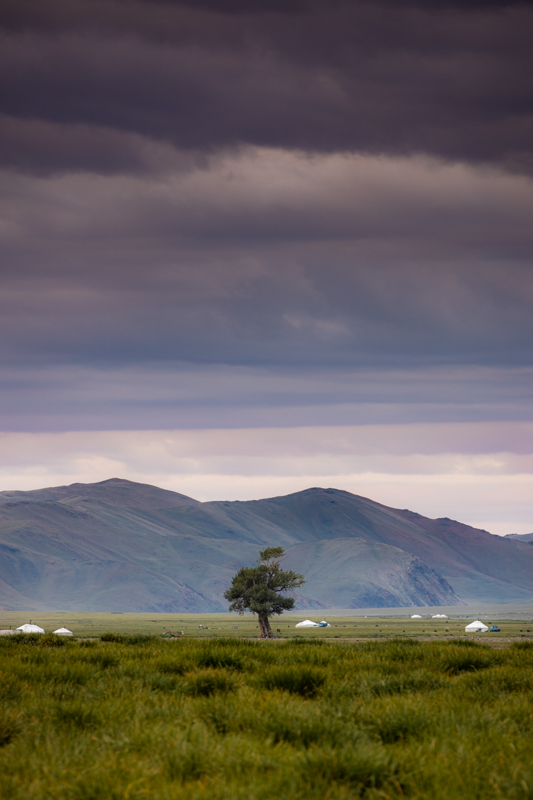 I had a bit of a battle in the morning with compromise.  With photos of Mongolia it’s often best to use a telephoto lens.  A wide angle lens can almost make the landscape look flat. A telephoto lens will compress things and make them look more dramatic.

But, the sky this morning was so incredible that using a telephoto lens would totally cut it out.  So I used the 16-35mm Canon to grab mostly sky, and compromise on how much landscape is shown.  I think it works. 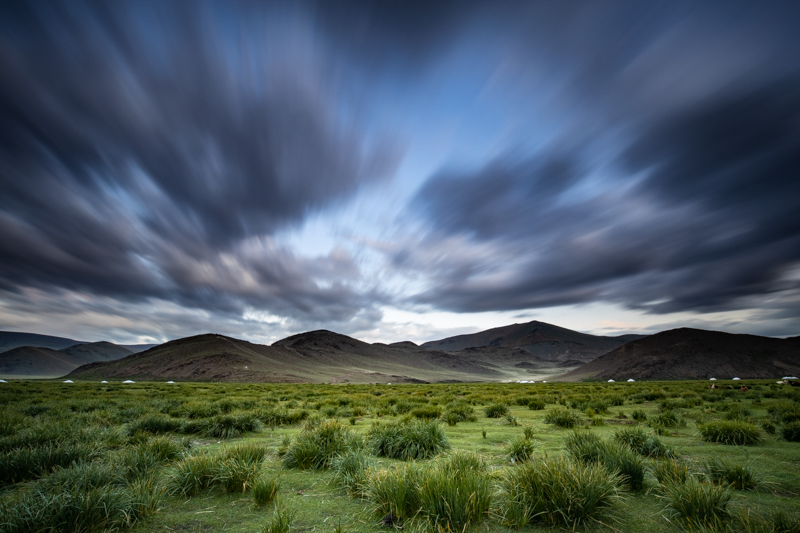 A Stop for Rivers and Camels

From the eagle hunters, we headed towards the Russia/China/Mongolia border.  And, honestly, we had no idea where we were headed or what we’d see.

Some bad weather and bad roads meant that we were behind schedule so we ended up staying at a ger camp alongside a river.  It led to a bit of a day of misadventure, which you can see, but some cool images came out of it. 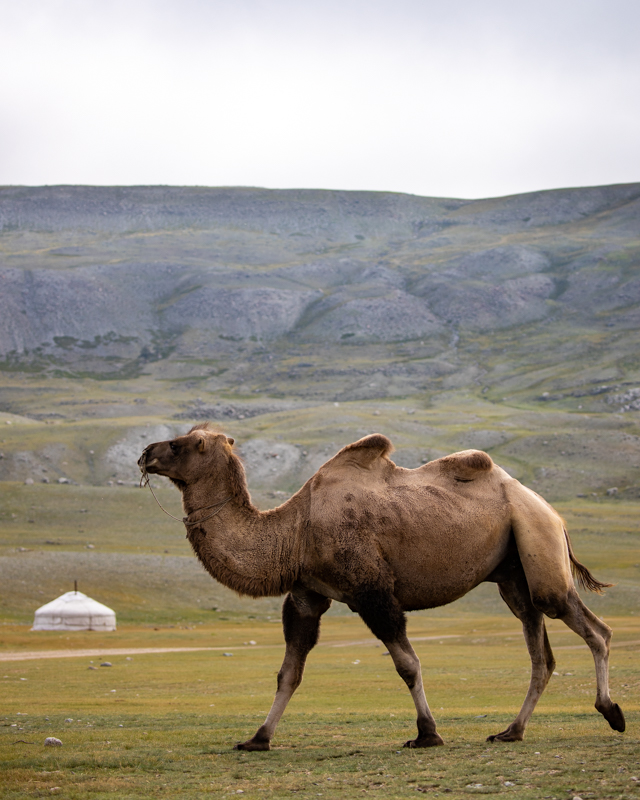 I actually had pretty high hopes for this image.  But, when all the clouds dissipated it left the scene lacking a little bit.  I tried to compensate by cutting out a lot of the sky and building a panoramic image. I think every set of images from a country needs a pano, so this was going to be my Mongolian panoramic.

It’s alright, but nothing to hang on your wall or put in a calendar.

As I was shooting my panoramic image, I noticed a group of tourists camping alongside the river.  So I pulled out my trusty 100-400mm lens again and captured the scene. There was such nice light on the hills, and the clouds stuck around there, so it actually kind of worked. 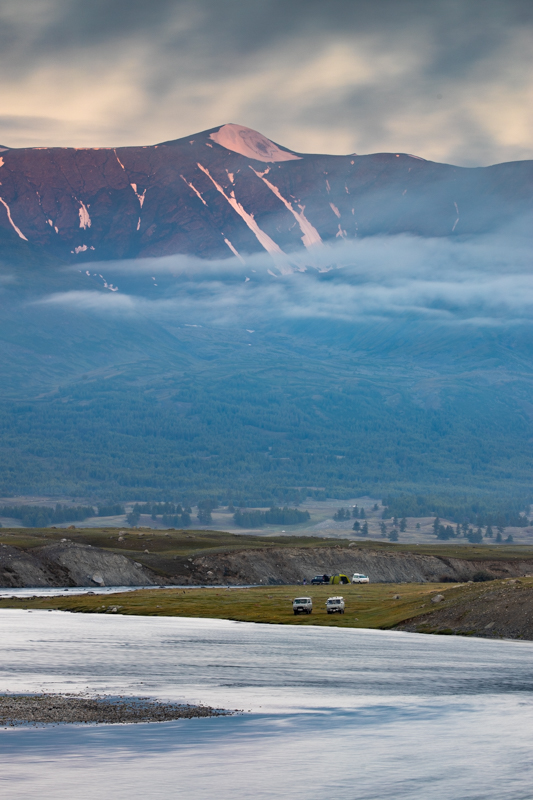 After our sunrise photography session down at the river, the plan was to grab breakfast and roll out.  But, one of our UAV-452 vans was broken down so we had to wait.  We ended up waiting for nearly 2 hours as they fixed the vans.

In the end, it might have been a blessing in disguise because as we waited a camel caravan came rolling through camp.  Most of the participants in my photography workshop got some pretty cool images.  I managed to grab one that I really like. 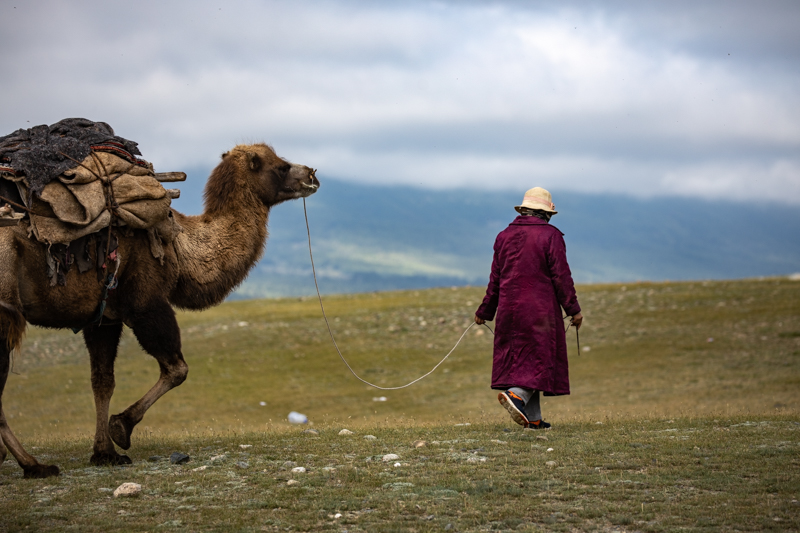 As everyone was sort of focused on the camels, I noticed a herd of semi-wild horses off in the distance. The light on them was phenomenally beautiful.  It was an image I didn’t plan at all.  In fact, it was kind of just a bit of a “oh look at that!” and snap. But, I do love it. 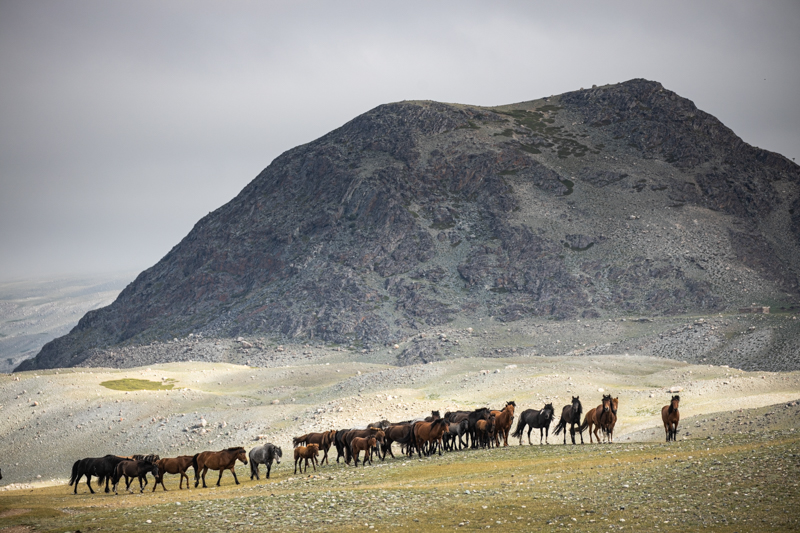 The Highlight of the Western Mongolia Photos

As we drove northwest to “Friendship Mountain” all I could think was, “wow, this better be worth it!”.

The drive was brutal. It wasn’t that it was particularly hard physically – despite the bumps. It was more mental exhaustion. Every time we got moving, it felt like there was another issue.  After our 2 hour delay leaving in the morning we had another total of 4 hours worth of breakdowns throughout the day.

And even once we got into our ger at the base of the mountains we were all a little bit on edge.

Thankfully, it was all worth it.  I think this might not only be the highlight of western Mongolia, but of the entire country.

On the way to our camp, we were obviously running late.  We had a viewpoint of the mountains in the distance in mind.  But, we were just so late getting there.  In fact, as we rolled up to the viewpoint the sun was already on the horizon.

I did manage to eyeball the situation quickly and make a photo before the light totally disappeared.  It’s not exactly a typical Mongolia image, but I do think that it works well as a set with the rest of the images. 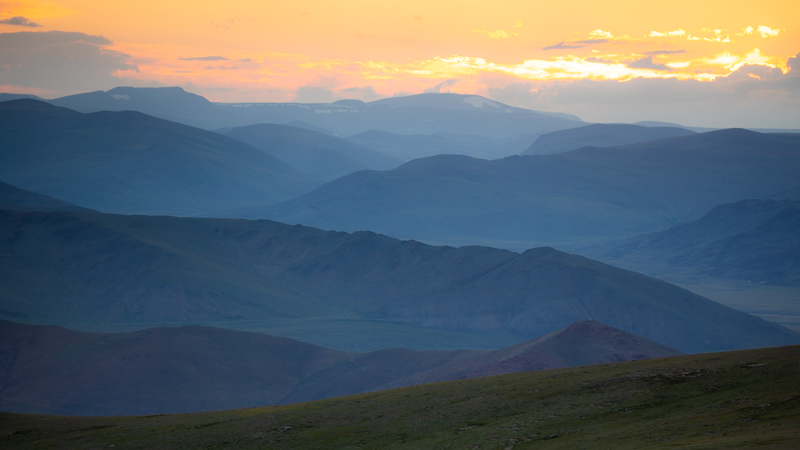 A Horse and a Glacier

One of the participants on our trip, Jay Ngai, was feeling the altitude when we were planning on setting out to the glaciers in the morning.  I told him that it was cool to stay behind; to get healthy.  But once we got up to these glaciers I said to our guide, “can you send one of the driver’s to get Jay? Tell him it’s too epic to miss”.

And we had all day here.  It was so good to just be able to sit up there and enjoy the view after a couple days grinding through western Mongolia.

As we were sitting there, enjoying the view, this horseman just rode across the view.  I snapped an image casually, and I love how it came out.  But more than anything I love that it kind of brings me back to that moment. 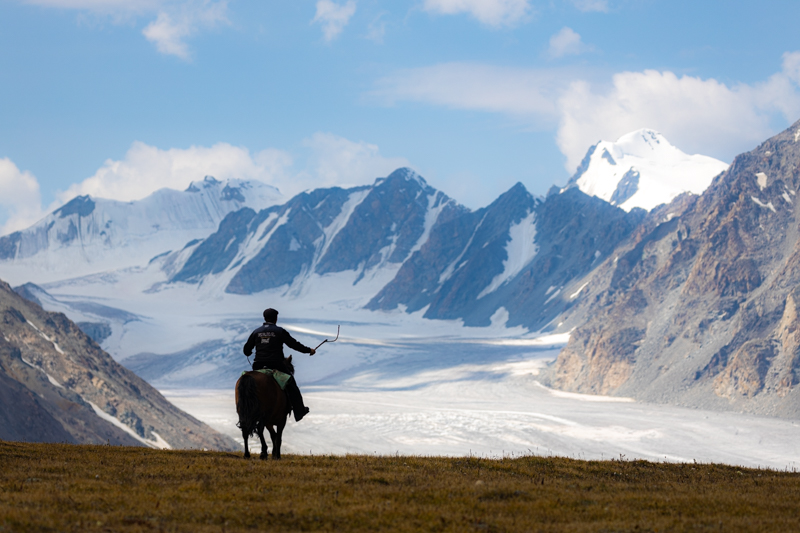 No Light, Just a Test

Looking back at these two images I kind of laugh now.

The light on the glaciers was totally back-lit.  So, I said to a couple of the Mongolia photography tour participants that we should just go on a scouting mission down closer to the glacier.

And even when we got there, I was like, “figure out some compositions that might work for the morning”.

Even as I was taking the pictures, I was thinking, “this should look great in the morning.”

Looking back, though, I love the light as it is. In fact, these images are some of my favourite of the year so far.  The second of them would have ended up in my annual calendar if I didn’t opt for a portrait orientation calendar this year.

It was a good thing, too.  That night, we got hit by a pretty epic storm and sunrise didn’t happen.

We left the glaciers for a new location – and, actually, a place that I didn’t even have in my pre-trip information.  But, after our epic night at the glaciers, I was down for anything.

And after arriving a little after dark to our next camp, I was eager to get some photos in the morning.  Magically, the light, location, and subjects just all came together in a day here in Mongolia that can only be described as perfect.

My biggest fault as a travel photographer is that I’m always drawn to the first thing I see.  In this case, that thing was a stream that flowed through our camp.  The only problem was that using the wide-angle lens needed to capture the stream meant that the peaks in the background flattened.  A tilt-shift lens would have come massively in handy here.

The photo is OK. But, all the drama is killed with the wide angle.  In Mongolia, you want that “epic” to come through in the photos. 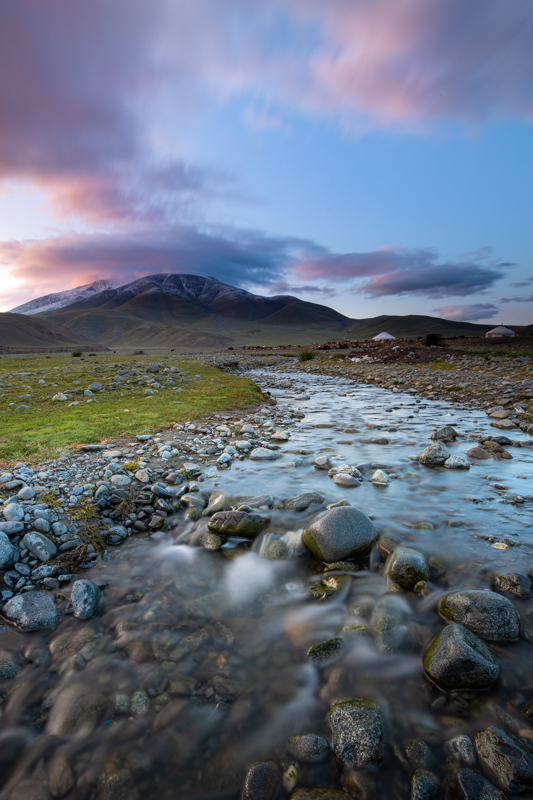 A Mongolian Ger and a View

I struggle sometimes with simplicity in my photos.  So, in Mongolia it was one of my goals to try to keep things simple.  I don’t need the ger, the stream, the mountain, the goals, and the kitchen sink in my photo – I need whatever elements look best.

In the case of the below image, it was the ger and the mountain.  In fact, the ger almost mirrored the shape of the mountain.  It almost looks like a frame. And that light was just unbelievable. 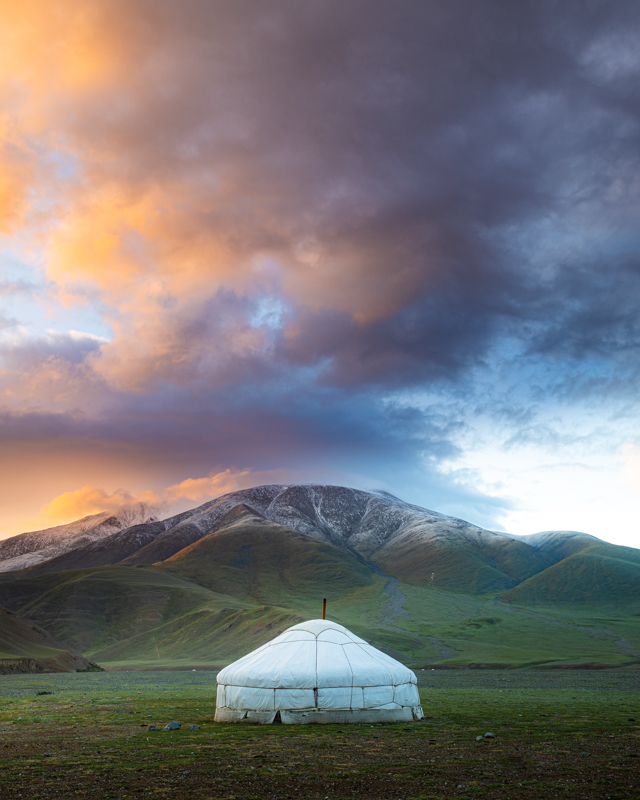 After sunrise, we packed up and headed towards the mountain in the background of the other photos. On the way, we stopped at this incredible mountain view for some photos.

And, I’m not going to lie you, this incredible photo isn’t of a man in front of an epic Mongolian mountain.  I mean, it is… But, it’s also Greg off to “relieve himself”. 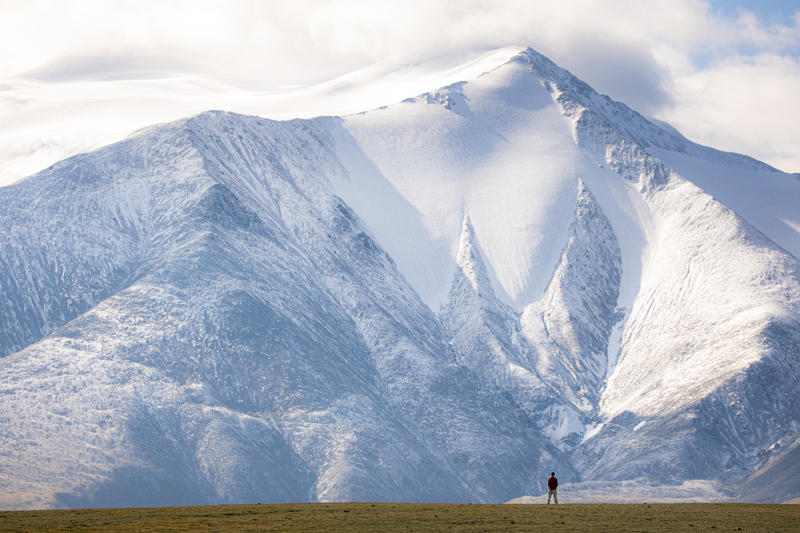 I Need to Come Back Here

The thing about not knowing where you’re going – or in the case of this western Mongolian trip, where you are – is that you can’t really plan your photo shoots.

This location might have been the most photogenic on our whole trip.  However, we were there in the middle of the day.

I didn’t want being here in the middle of the day, though, get in the way of making an image.  So, I stacked up a bunch of ND filters (4-stop grad, & 10-stop ND) and pulled the shutter on a really long exposure.

It’s OK, but I really need to come back here in better light. 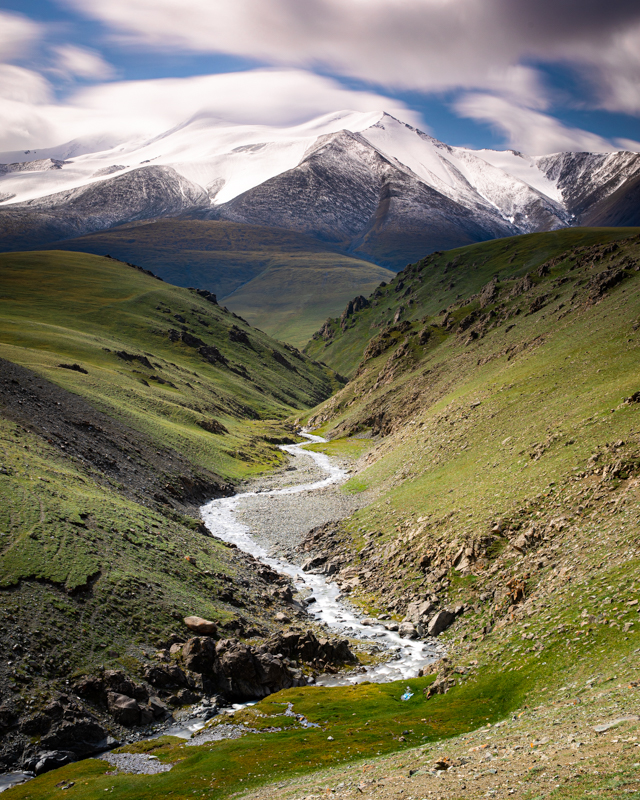 A Mongolian Horse and a Waterfall

Our guide led us to a waterfall near the view, and I actually wanted to get him to pose in front of it.  But, as he was posing, a local on horseback came down the hill and through the river.  Magically, he just posed in front of the waterfall without question or instruction.  It was amazing.  Never did I think an unplanned photo like this would be possible in Mongolia. 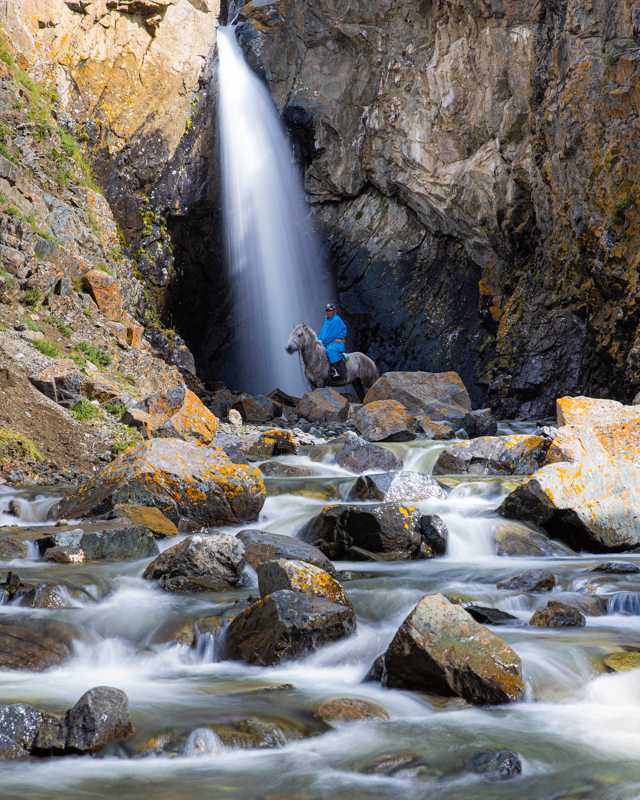 To Cap it Off, A Throat Singer

We ended our trip to western Mongolia on a low note – pun intended.

Our guide arranged a private performance for us by a famous Mongolian throat singer just outside the town of Khvod.  It was a really special experience and such a good way to end the trip.

I took quite a few photos at first, but then decided to put down the camera for a bit and just savour our last western Mongolia experience.

Of course, I did get a couple images regardless. 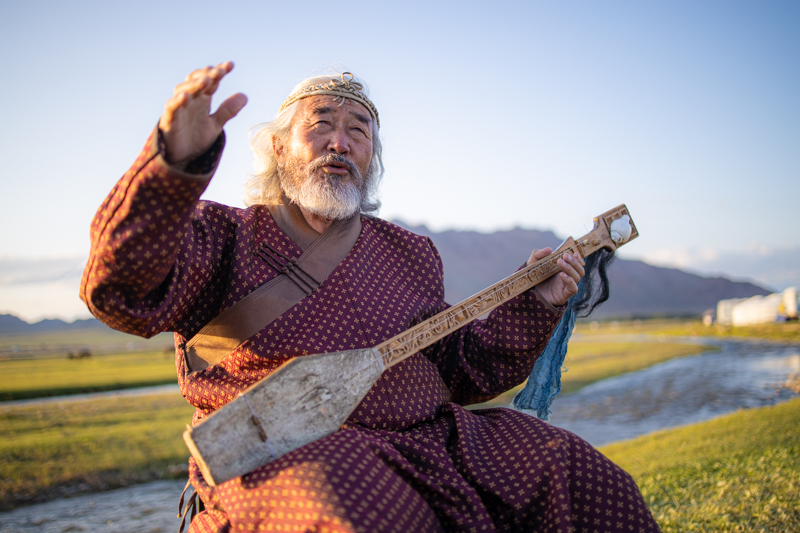 Join Us in Mongolia?

We had such an amazing trip in Mongolia this past year that Greg is actually going to lead a trip to Western Mongolia in the summer of 2020.

Or, if you want to join us on a photography workshop and tour somewhere else in the world, please check out our trips here.  Along with Mongolia, in 2020 we’ll be headed to places like Iceland, Peru, and Georgia!