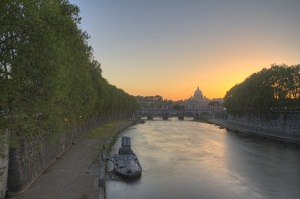 A Photo Essay: Sometimes you have a Bad Day and End up in Rome

In travel you can always make plans.  However, no matter how much we plan, it seems the world will always decide what we see and what we don’t.  If I’ve learned one thing in my travels it is that if the world pushes you away from something, and towards another, there is a reason.  This is the story about how I ended up in Rome.  I have also included a series of my favourite photos of Rome, enjoy.

The train meanders like a river across the Swiss countryside as a blanket of fresh snow seems to be tossed over the green pastures. Suddenly, the train dives through a series of tunnels and has seemingly taken us to another world all together. We arrive at a beautiful lake scene coated by blue skies as we shake our heads in disbelief at both the beauty and the stark contrast. Like crossing through the gates of Narnia, the rapid changes in European geography continue to surprise me. And, although I don’t know it yet, for the first time since arriving in Europe, my plans are about to change as well.

The Sunset glowing of the Colosseum

Dusk at the Colosseum

As I leave the train station in Milan I can’t help but notice that the city is dead. Apparently, people celebrate Easter Sunday with some vigour in Italy. I hike a couple blocks to the hotel I have written in my notes, the one that I’m meant to be reviewing. However, as I walk to the chubby receptionist he sifts through the papers before telling me that he has nothing in my name.

“Can I use my computer and your wifi?” I ask him. “I can show me my confirmation email”.

However, when I open my emails I realize that something is wrong. The email warning of my arrival I sent out earlier in the morning has received no reply.

Guards in Pijamas at the Vatican City

Friar Tuck in the square outside the Vatican

The road to the Vatican

Grumpily he bellows at me that there is no one by that name at his hotel and that he will not be taken advantage of by some scammer. Confused, I ask him if I can keep using the internet to try and sort things out, to which he yells at me that the internet is only for guests. I ask him if I can leave my bag there while I try to sort things out; he hesitantly agrees as I leave him no real choice as I dump it in a corner and race off.

The canals in Rome

I begin to wander Milan aimlessly hoping to find a place with wifi and a plug-in, however everywhere is either shut or without wifi, as Easter Sunday has turned Milan to a Ghost Town. Even the wifi at MacDonald’s is down for the day. Finally, I find an internet café where I fire off a bunch of desperation calls and emails hoping to sort things out; nothing is sticking as everyone has the day off because of Easter.

A man on a scooter cruising through Rome

I come to the realization that I am going to need to find a place to sleep, and begin going door to door. Each hotel I visit is either full or 200 Euros above my meagre budget. I circle back to the hotel to ask how much it is for a night but as I enter the doors the stocky receptionist is waiting with my bag which he throws at me and tells me to leave his property.

“Screw it,” I say on the verge of throwing a really awkward hissy fit. “I’m going to Rome.”

Rome wasn’t in my plans, but the beauty of travel is that sometimes the world decides for you what’s on your “plans”. At the end of the day I turned up in the suburbs of Rome around midnight at a campsite. At the end of the week I realized why I went through such a struggle of a day. Rome, is exactly where I was meant to be.