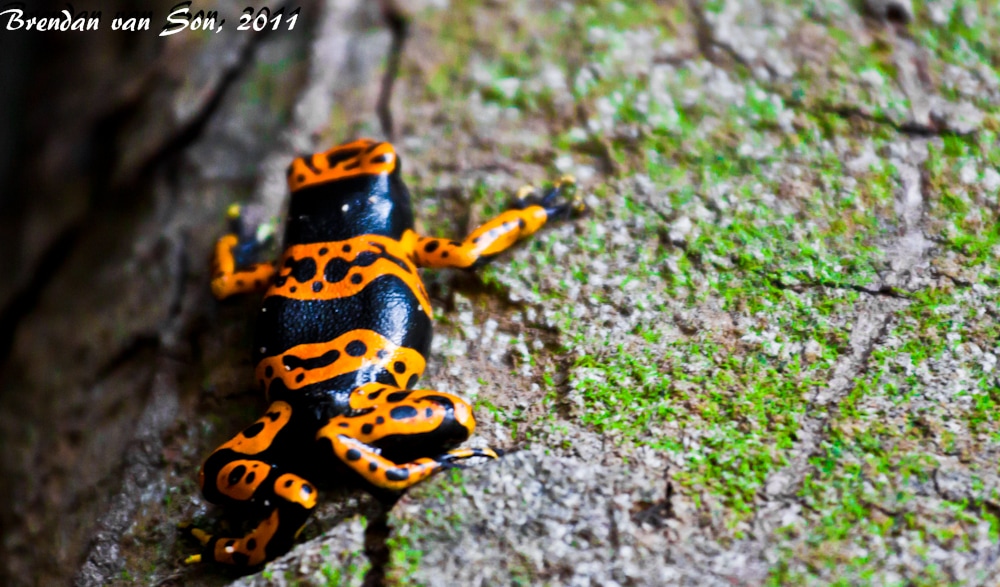 The first time I ever saw a poison arrow dart frog I was hiking alone in the Osa Peninsula of Costa Rica.  It was one of the many stupid decisions I made while backpacking at the age of 21.  Here I am hiking the second most bio-diverse place on earth, filled with killer bees, venemous snakes, jaguars and pumas, and I’m doing it all alone.  The one animal that I saw on that trip that I will never forget was a green poison arrow dart frog.  It was maybe the most beautiful animal I had ever seen.  When I brought my fuzzy picture back to the ranger station she told me that if I had touched it, with the open wound I had on my hand, it could have killed me.  I had no idea.  They say in the jungle that anything that doesn’t try to camouflage itself has a reason why it doesn’t need to, and this frog falls into that category.

They call it the poison arrow dart frog because indigenous hunters have used the poisonous venom it secrets on their darts.  What they would do is catch a frog, cause it to secrete its venom and roll their darts in it.  This way when they shoot an animal the blow will be fatal even if the shot just barely penetrates the skin.

When I came across this bright orange and black poison arrow dart frog, near Annai, Guyana, I wasn’t going to get too close to it, as I had cut my hand earlier in the hike, but I needed to get a photo.  To me, this one of the most impressive animals in the world.  Seeing another frog of this type, in a completely different colour has only intrigued me to try to find more of its kind.

My guide found this frog in a dark and damp place on the trail, the typical habitat for this type of animal.  Its location made it difficult to shoot as it was very dark.  I used a slightly higher ISO speed to counteract this.  Also, I always pack my monopod on hikes.  If you ask for my personal opinion this is one of the essential pieces of camera equipment to pack with you on a hike.  It isn’t too much of a burden to carry, as is a tripod, and gives enough stabilization to get a sharp photo.