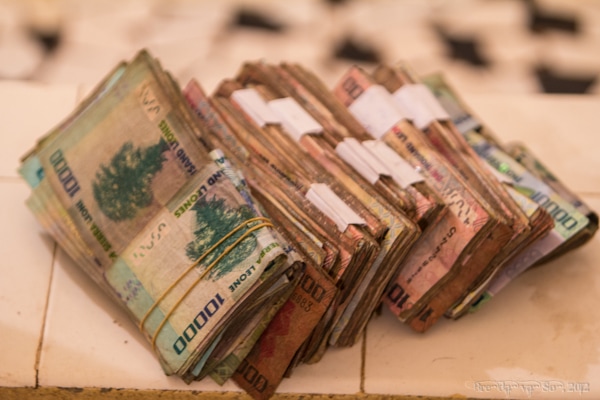 Guinean money, a stack of about $200 worth
Travel Photography Blog

Dealing with Police Corruption in Guinea

The calls from across the street rang out from a group of over-sized police officers who I knew were going to be trouble even before walking anywhere near them; a group of policemen in Guinea not doing anything in particular is always trouble.  In fact, attempting to avoid them, by walking on the opposite side of the road was exactly what was about to get me into trouble.

In choppy French the leader of the group – a man who stood about 6 foot 4 and must have tipped the scales at about 260 pounds of muscle – barked at us as he slowly approached.  Luckily, I was with the friend of a friend named Ali, a very well-educated and highly regarded translator, who offered to show me the way to the Sierra Leone embassy on his way home for the day.

“Where do you think you are going?” The officer demanded as he talked down to us both literally and figuratively as if we were children skipping class.” You are to walk on this side of the road!”

I apologized quickly but soon realized that this would be a whole lot more trouble than it should be.  A group of his colleagues soon crowd around us a in attempt to shake our confidence.

“You must pay for your crime,” the officer continued in his bellowing tone. “We must detain you.”

It was at this point that a wave of understanding from myself, and disbelief from Ali, shook through the air, and I have to admit I’m glad to have had Ali’s company because I’m not sure how I would have handled the situation on my own.

Without any hesitation Ali – who isn’t exactly a small man in his own right – stepped up with his own show of aggression and power.  And to me, his display of force was much more impressive based on the fact that we were outnumbered about 5 to 1; and they had guns.

“If you’re looking for money,” Ali yelled while standing nose-to-nose to the lead-corruptor. “You might as well take us to jail. We aren’t paying you anything! I am a government translator working for Minister So-and-So.  I am escorting this man to the Sierra Leone embassy.  We have done nothing wrong!”

You see, in Guinea the problem is that the art of the bribe has been lost.  A bribe is when one does something wrong and has to pay their way out of it.  In Guinea, when no one is breaking the rules, they’ll invent them and then abuse their power to coerce you into paying.

Part of the problem too is that there are just so many police/military people in the country that they are 1) underpaid, and 2) have nothing to do.  Thus, they spend their time trying to earn a little more money; abusing their power to do so.  It’s like a Johnny Depp character once said: “policing isn’t a career, it’s an entrepreneurship.” And seeing a white man like me walking down the road in a poorer suburb of Conakry is like watching a dollar bill floating towards you in the wind.

“Ok, take them and put them in the truck,” said the officer as we were pushed a couple steps towards the police paddy wagon which was being guarded by two men with AK-47s.

I began to worry that Ali’s tactic was going to land us in Guinean jail, but he persuaded me to stay resilient and that they are bluffing.  Ali asked to talk to the commanding officer and was eventually granted the opportunity.  As he laid out our defense to the man in charge, the officer couldn’t even look Ali in the eyes and only stared down the road in agreement.  He knew that what his men were doing was wrong, but obviously turned a blind eye in exchange for a cut.  However, when confronted by someone with any sort of courage and intelligence, well, you could tell by the look of disgrace on his face that he was ashamed by his actions.

Eventually, the commanding officer exchanged a couple angry shouts with the original corrupting officer in Susu which I couldn’t understand and we were finally left to walk down the “right side of the road” without paying a penny.

“Do they think I am a boy?” He kept muttering. “I am not some uneducated boy!”

In my travels I have paid bribes before, but always in situations where I was breaking the rules: sleeping on an ancient pyramid, crossing borders in unregistered vehicles, etc.  But this was the type of abuse of power I had only heard of, and been warned about.

The truth is that along the way through Guinea I found myself battling police and military in this way about a half a dozen times more.  Thankfully, through Ali’s model of dealing with it, I managed to get through the country without paying a single “bribe”; although every step of the way it was a challenge.

Obviously, paying these bribes would be easy for me to do.  Most of those looking to extort me were looking for 5,000-10,000 Guinean Francs (0.80-1.60USD) but it’s a matter of principle.  If I pay them, it becomes the norm and not an abuse of power.  Moreover, I’ll say that in Guinea it wasn’t just me, le blanc, being targeted.  I saw countless people along the way having to deal with the police and military in the same way I did.  And they were just as unhappy about it as I was; but what are they to do?

At the end of the day, it makes for a very tense country.  The people don’t trust the military to protect them, while maintaining the military force drains the country’s coffers and stifles development.

I’ll end by quoting another line from a movie, but again not remembering each one.

Well, in Guinea it seems the lines between the two are blurred, but I can definitely say that I was much more worried about the police/military than I was thieves; and to be honest, I think so too were the civilians.  A shame really as each civilian I met along the way was so kind and welcoming.  I hope someday these people finally see the freedom of a non-military state, something that has never been the case.