Nearly every city in the world has its own iconic structures. They serve not as the descriptor of what a city represents, but rather they lead the common thought as a method of association when thinking about that city. In many cases they are beautiful, unique and intriguing. Some lead into romantic thoughts, others to adventurous ideas, and all of them lead into conversations. Paris has the Eiffel Tower, London is known for Big Ben, Venice has its canals and Punta del Este: a giant hand stretching out of the sand. 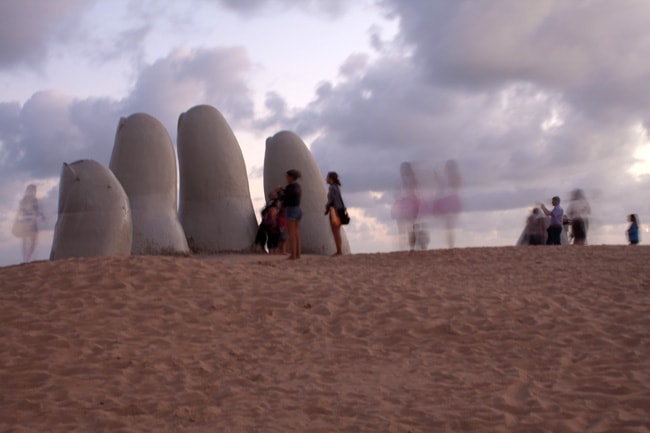 People racing around the hand

No matter how silly it may be, you can’t go to a destination without taking a picture of its iconic image, how else would you prove you were there? In all honesty, at the surface most of the world’s cities are similar, it is their iconic images that set them apart. I could show you an image of any skyline in the world and it would lead to a guessing game of where that city was. Throw in an iconic building such as the CN Tower, sears tower, or the former world trade center buildings and a city is recognizable in an second. What leads to these iconic landmarks? Sometimes it is history, other times it is innovation, but it is always a matter of creativity. 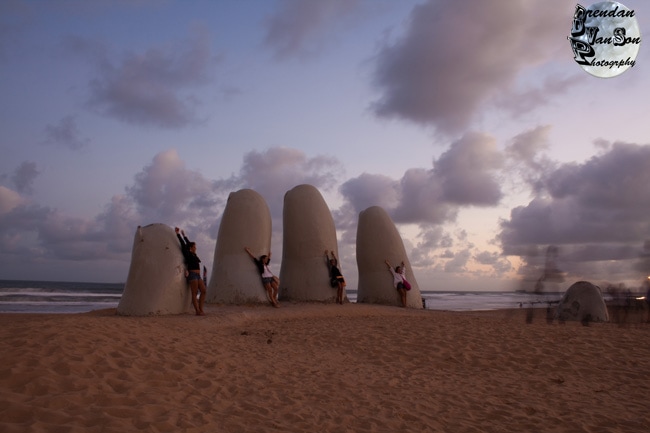 Posing with the great hand

I stood in front of the famous hand in Punta del Este, Uruguay for about 45 minutes at dusk waiting to get a picture free of the presence of people.  However, cars, buses, and pedestrians constantly assaulted this awkward hand with giggling voices and smiles attached to their rosy faces. They raced around the hand in amusement trying to get as many creative pictures as they could before someone else would come into their shot. I couldn’t help but think that this hand must have seen every single type of pose possible. It must have been touched more than the hand of even the most popular campaigning politician. 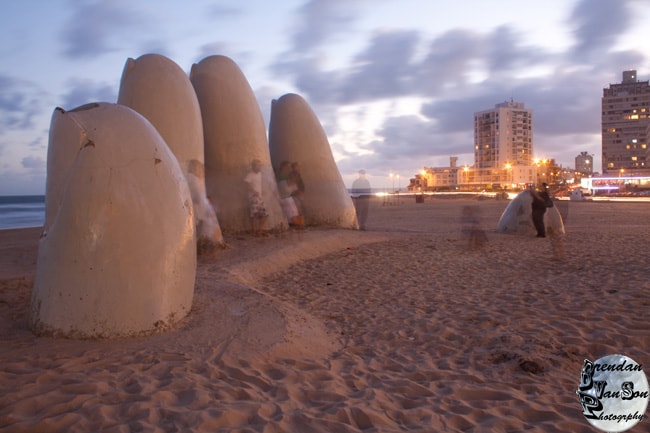 Movement from those racing for a shot

In the end, my frustration led to entertainment as I couldn’t help but laugh at the people racing around this icon of Punta del Este, Uruguay. I began shooting pictures of the other people taking pictures of themselves and their friends, because at that moment I realized that this is what these iconic landmarks are about. They aren’t so much about the picture, or the landmark themselves, they are about the joy that people receive when they finally reach a destination that has only existed to them in the pages of travel magazines or the brochures of travel agents. These are the moments that lend the reality of “I am in Punta del Este” to the likes of all travelers to this city on the coast of Uruguay. 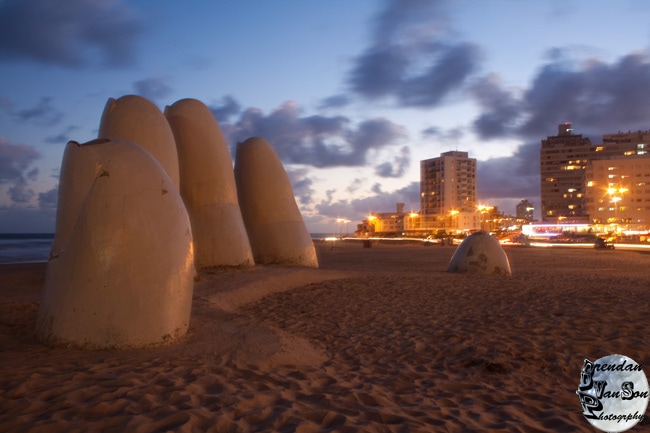 Finally a shot free of people, although I had to beg about 10 people to wait 20 seconds for the long exposure shot to develop

Iconic landmarks lead to iconic images and they do a lot to describe a destination. How many people, I wonder, know nothing about Paris other than the Eifel Tower? How many know anything about Cambodia without Ankor Wat?  Or Peru without Machu Picchu?  These are the attractions that draw people to a location and, in turn, lead them to learn more about a certain destination. For Punta del Este, that attraction may be a hand in the sand, but if it brings smiles and laughter to the faces of visitors, then it has served its purpose.

Yesterday I posted a picture from Carnival.  I also posted the second article from the series on Florianopolis, Brazil.