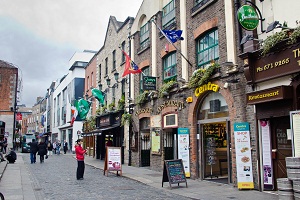 Reviews of the Kinlay and Avalon House Hostels in Dublin

I spent a total of six nights in Dublin, and as such I actually rested my pretty head in two different places. Both places offered something quite different, but both were also nice stays.

I will start off with the review of the first place I stayed at, Kinlay House Hostel.

One of the dorm rooms at Kinlay House.

I stumbled into Kinlay House early in the am after an overnight flight on which I didn’t sleep, so I’ll give the staff who welcomed me quite unenthusiastically a break since I may just have been grumpy; they were really pleasant beyond that morning.  At the end of the day, I was really happy with my stay there. Other than some internet issues, I felt like the hostel formed into a nice little community. They way it was set up was very conducive to meeting new people.

The rooms, for a change, were not bunk beds but single beds simply laid out. I liked not having someone above or below me, but I wish there was a little more space for luggage. Personally, I would have liked it they took out one of the beds in the room and put a set of luggage lockers in its place. There simply wasn’t anywhere in the rooms to lock things up, and as someone who packs about $4,000 worth of electronics I’d like to know they are safe.

Church just down the street from Kinlay House

You wont find a hostel with a better location. Just outside of the party district of Temple Bar and in a part of the city full of museums, castles, and churches.  You wont have to walk far to get anywhere. It is also right on the main bus link from the airport making it easy to get to.

I would stay here again, and I would also recommend it to nearly everyone. I think the combination of the location, the free food, and the comfortable surroundings makes it an easy choice.

And that brings us to the second place I stayed, the Avalon House Hostel.

Avalon Hostel is as classic a hostel as exists in the world. It is very clean, has nice dorms and common areas and the staff is extremly friendly. However, there is nothing that will blow you away about this property. It is big, busy, and fairly standard. Still, you could certainly do worse than staying here. No frills, no gimmicks, just a classic European hostel.

I felt like the rooms were a little bit on the small side. I was in a six bed dorm and there just wasn’t a whole lot of space. I was in with a group of guys from England who weren’t packing much gear, but if there were 6 backpackers in the room it would have been a bit of a mess. Still, the rooms were clean and the beds were comfortable.

In comparison to Kinlay House, the location of Avalon House is not good. However, it is all relative. Everything in Dublin is quite close so it doesn’t really make for an issue. You can walk to Temple Bar in about 5-10 minutes. You are right near a bunch of great little parks though which is a plus. If you’re looking to stay in a quieter part of town this is a good location.

Personally, I’d stay at Kinlay House over Avalon for a couple reasons. 1) The location is better. 2) The free food a couple times of week. 3) It’s more of a community feel over at Kinlay. Still, you could do much worse than staying here.

Back to the Dublin travel guide for backpackers 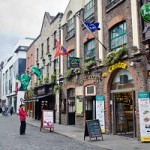