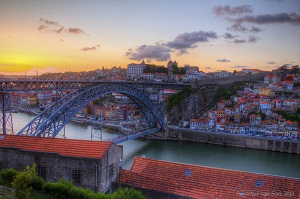 Searching for Home in Portugal

Secretly, my mission across Europe had been finding a potential base for when I’m done in Africa a couple years from now. I thought that after two years of constant motion I’d probably be ready for a bit of a base. Not a home entrenched in cement, but a base for exploration. I’ve always said I’ve felt most at home in Medellin, Colombia, but is Colombia a realistic base for a traveller?

I dreamed of finding a place in Europe that captured my spirit the same way Medellin did. A place that is full of life, friendly people, and a diverse array of cultures. As I explored the UK, France, Switzerland, Italy and Spain one country seemed to always jump out at me: Portugal.

I’m not sure what it is about Portugal. Maybe it’s the delicious food, the near perfect weather, or maybe just the fact that it is overlooked by so many travellers; in comparison to major Spanish cities, Lisbon is a sleepy village. It is alive with colour and character. Unlike the grey wash of London, there is no mistaking what city you are in while meandering down the narrow streets of a Portuguese city. I’ve grown to love places of cultural melange, while for years I had been advocating cultural mosaic.

There is something about the blending of cultures and people in Portugal that captures my spirit. It seems as though everyone is accepted, not as immigrants or visitors, but as citizens. While of course the simplicity of such statement has obvious holes, there is no doubting the fact that the cultural melting pot is alive and well in Portugal.

The coast of Portugal

However, at the end of the day I found myself doing the same thing that I do with nearly everywhere I’ve been in the world: I began comparing it to Colombia. And although, yes, the location is more globally central, I’m not sure it can stack up. There is something about Colombia that has a hold on me. I can’t explain it; it’s not the climate, the location, the language, the culture or even the women that have a hold on me. And maybe I’ll never be quite sure what it is that makes the place feel like home. But I suppose home is never meant to explained, it just is.

While I enjoyed Portugal as much as anywhere in Europe, it seems that my search for a home, or at least a base, continues. Or perhaps, I’ve already found it and I’m just far too stubborn to admit it.