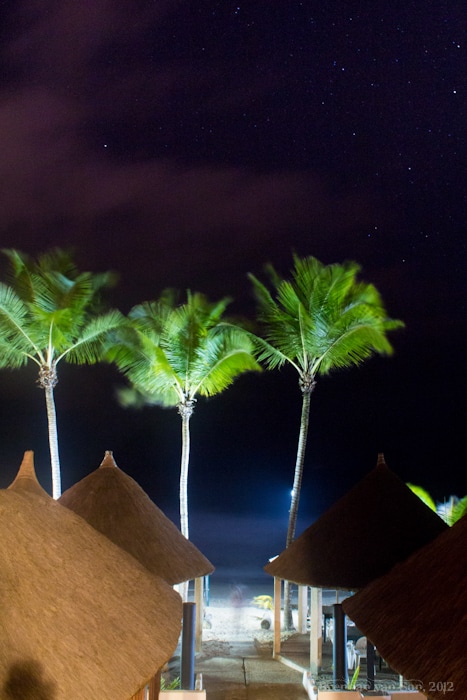 I spent an entire week holed up on the beach at Grand Bassam, and believe me I wasn’t complaining about it. I had to put some serious time in on the computer to get the latest issue of Vagabundo Magazine completed, and there was no place better to work than from a beachfront office. I’ll have a bit of an article about my time here in Grand Bassam, Cote d’Ivoire in the next couple days, but in short I had this place all to myself. This resort of maybe 20 rooms didn’t see another guest spend the night but me the entire time I was there. I’m sure that during the vacation months this place is packed, but it was like a ghost town while I was there. The fact that things were quite slow in Grand Bassam actually made it quite nice to photograph. This was one of the only clear-ish nights I got in Grand Bassam so I tried to do a bit of a star photography shot. Quickly, however, after firing this image the clouds rolled back in and successfully ruined my fun.

How I Got the Shot “Grand Bassam Night”

The truth is that there is no short way of telling you how to shoot star photography, it’s a little bit tricky.  However, the basics of getting this shot were quite simple.  I shot an extremely high ISO at first to make sure my focus and composition was what I wanted.  The test shot also gives you a good idea of what the stars are like as your camera can actually see the stars better than your eyes do.  Then, I brought down my ISO down to a level where I could shoot a 30 second exposure, in this case it was ISO 1000.  Generally, I’ll play with things to try to get my ISO down to somewhere around 400 so I get really nice smooth images that re noise free.  That will usually take exposures of 90-180 seconds or sometimes much more.  However, as I mentioned, the clouds rolled in here in Bassam before I got that chance.  Still, I’m happy with how this image came out.