Stars Falling on Havasu Falls: Photo of the Week

I can’t remember who it was that told me that I needed to see Havasu Falls, but whoever it was I owe a massive thanks. My hike into the Havasu Canyon has been the highlight of the month without a doubt, and one I will surely write more about in the future. The twenty mile round trip hike is as rewarding as any in America. After slicing through a narrow canyon one arrives at a river of neon green/blue water which dances along the valley through a numbers of falls. Havasu Falls, which takes its name from the canyon it tumbles from, is the most famous cascade, and the one photographed below. I shot this photo under one of the most beautiful starry nights I have ever seen. For you this photo captures a scene. For me, looking back at this night, this photo captures a mood, a feeling, and a memory that is as precious as any piece of art. 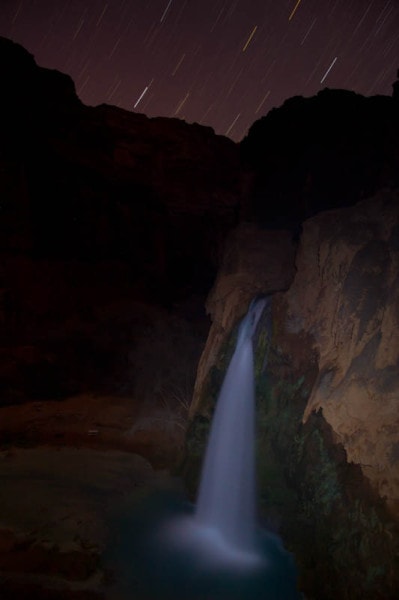 This was my first ever attempt at star photography. It’s something I’d been wanting to try for a while but had been waiting for the right situation. To get a shot like this you really need to the right conditions: no clouds, far from a big human settlement, and it doesn’t hurt if you’re at a little bit of elevation as well.

This was a little bit trickier shot that you might think. I basically set up the tripod and shot a bunch of images at really high ISO to be able to check the sharpness. I then opened the shutter for a 700 second exposure, nearly 12 minutes, using the bulb mode on the camera and a remote trigger. Since I don’t have an external flash, I used my simple LED flashlight to light the waterfalls. If I hadn’t done that you wouldn’t see the falls at all. Using a speedlite would have done much better or a much bigger area light would have made it a whole lot easier.

There wasn’t a touch of “photoshop” done to this photo. The trails in the sky are the stars in the sky. They show motion since the earth is rotating, hence why their trails are curved. The only minor thing I did was reduce the noise on the bottom half of the image which was caused by the mist from the falls I assume.

What do you think? Does it look too fake? Do you love it?