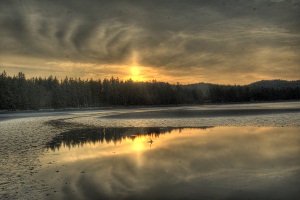 Photo of the Week: Story’s Beach

Exploring British Columbia has been amazing so far.  But I’d be lying if I said it wasn’t a challenge as a photographer.  With so much on the go during the day, and very late/early golden hours, it has been nearly impossible for me to shoot photos at the right time of the day.  However, the three or four nights/mornings that I’ve sacrificed sleep to head out and take photos during the golden hours have definitely been worth the sacrifice.

Knowing full well that the next day I’d be spending 16 hours on a ferry through the inside passage I decided that Port Hardy would be as good a place as any to sacrifice some sleep for a couple good shots.  I drove down to a place called Story’s Beach right at sunset for a couple images.  The beach was completely empty, and the tide was way out thanks to a near full moon hovering closer to earth than usual.  This allowed me some great light and a decent night shooting.  This was my favourite image from the shoot.

Shooting flat landscapes is a challenge.  Generally, when you photograph a landscape you either want to be way up looking down on it, or below looking up at it.  Thus, photographing beaches is always a challenge because there is nowhere to go.  If you shoot straight out into the water, or along the beach, you’re going to get a flat image where 90% of the subject is sandwiched into the center of the image.  Those images look flat.  The way I combat this is to try to find something of value to place in the front of the image.  It might be a log on the beach, maybe an animal, or in this case a puddle.  If the tide is low, head as far out as you can and try to find a puddle that is reflecting the scene.  This will give you a lot more depth to what is otherwise a very flat landscape.

As usual, if you have any questions about the photo or how I took it, leave a comment and I’ll try my best to give a bit of photography advice.