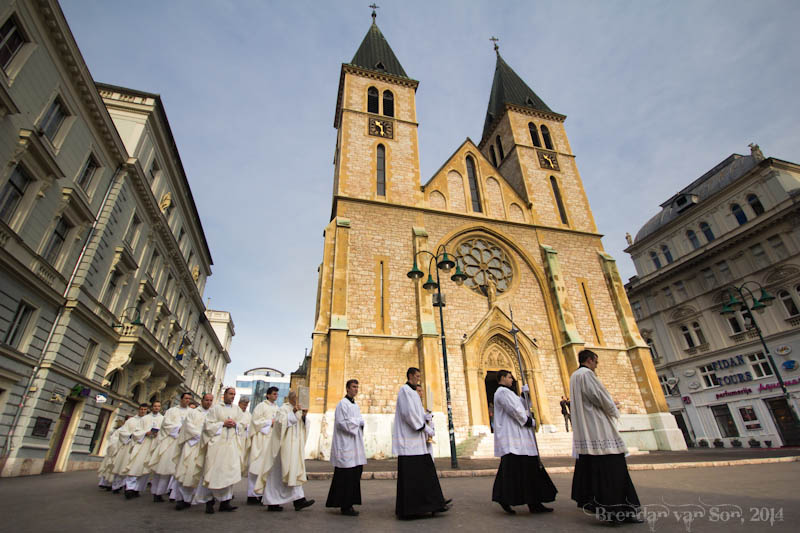 I’m a firm believer that as travellers we grow not only in the type of destinations we travel to, but also the type of experiences we chase.  Early on, we are content staring at a beautiful building, or view, and mentioning how amazing it is.  We’re happy sitting on a beach with a mojito and doing nothing at all.  It’s an escape from reality we search.  But after a while, these experiences begin to feel superficial, dull, and maybe even a complete waste of time.  We move on to experiences that excite us, that get our hearts pumping.  We search for the road less travelled.  But eventually, even these experiences begin to feel empty.  In the end, we are drawn to travel destinations that make us feel something – experiences that move us, and make us think.  Places that make us want to become better people. Places like Sarajevo.

I know I’m not the only one who was hit like a hammer by Sarajevo.  Anytime I mention the city’s name to someone who has been, I can see them being hit all over again by the emotion the city swells visitors with.  It’s driving down what was once known as sniper alley seeing the Best Western Hotel, exploring the old bobsled tracks, and ducking through a dark tunnel.  Then, it’s remembering the images of the burned out cars and shells hitting the same road you’re driving down.  Then, it’s about thinking of the Best Western flowing with flames as the dozens of journalists inside either huddled for safety or stood and shot their footage.  Then, it’s about walking up to a hole in the cement of the bobsled track and realizing that it was once the hide of a sniper – beside it a couple dozen bullet holes chipped in to the grey. Then, it’s about hearing the shells explode as you imagine the tunnel full of soldiers and civilians slipping out of the city.

Through all the sad images of Sarajevo that we’re so used to, the amazing thing is how far away from that strife-ridden place it feels today.  All most people know when they think of Sarajevo is the siege it befell in the 1990s.  In many ways, it was seen as the heart of conflict and division.  Today, it’s almost seen as the epicenter of tolerance and multiculturalism.  The old town center features mosques, synagogues, orthodox churches, and cathedrals all within a block of one and other.

There is something at work in Sarajevo, and it’s not easy to describe.  It might seem cliche, but it just feels real.  It feels raw and moving.  It’s indescribable, but yet completely understood by anyone who has visited.

Like anywhere, what makes Sarajevo isn’t the buildings, the bridges, or even the history.  It’s might be the bridge where Franz Ferdinand was assisinated, or the beautiful othodox church and stunning mosques, that make people visit, but that’s not why they come back.  That’s not why they jump at the chance to rave about their visit to Sarajevo.  What makes Sarajevo special is the people, and their willingness to open up their hands to greet anyone who comes to visit.  Through all they’ve been through, and continue to go through, people in this city are incredibly eager to share their story with anyone who will listen.

Sure, life in Sarajevo, and Bosnia-Herzegovina in general, remains far from perfect.  Car break-ins are common, the economy is weak, and people displaced by the war are still struggling to find their place.  Building Sarajevo to be the grand city it deserves to be is going to be a slow process.  But whether it’s the family at Vagabond Hostel sharing their stories, or expats who have dedicated their lives to protecting and building this city that they love, or the guy who serves you at the local restaurant and can’t wait to welcome you, the vast majority of what I found in Sarajevo was a sweet warm welcome, and that’s a pretty good start.