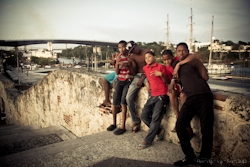 The Boys of the Dominican: Photo of the Week

While in the Dominican and Haiti I tried to make photographing people a priority of mine. Despite the fact that I have been photographing people for years on the road it is still something I struggle with in terms of comfort approaching them. However, I told myself that I was going to approach at least 2 people a day to get photos. If all else fails, just ask kids if you can photograph them as they rarely say no. This group of kids started asking me about my camera so I told them I would photograph them. As I did, one of the kids said he didn’t want to be in the shot. While I was shooting the photo he said, to me in quiet Caribbean Spanish “Man, these guys are thieves, you should get out of here they’ll try to take your wallet”. Since I don’t carry my wallet while I’m out shooting photos I wasn’t worried, but I showed the guys the shot with a tight grip on the camera and then told them I had to leave. I really appreciated the kids’ warning. I think it takes a lot of courage to warn someone about your friends. Anyways, this is the photo I got of the gang in Santo Domingo.

I’m not really sure there’s much to say about being technical here. Shooting groups of people is more about being assertive and telling them what you want. These kids were moving a lot and covering faces with hands and such. As such, I needed to tell them to not move, move their hands, etc. If you don’t tell people how you want them you won’t get the shot you want either. Be assertive, and act like you’re a professional and people will respect you. The only technical adjustment I had to make on this photo was to increase the ISO due to the low light. I didn’t want to go much higher than 500 ISO, so I had to make sure they were very still, shot this image from my tripod at a shutter speed of 1/4 seconds and f/5.0. It worked out well.