The Work and The Reward

The Work and The Reward 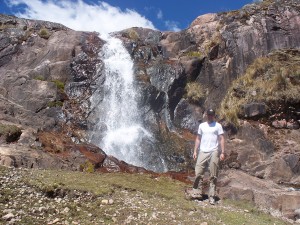 We raced ahead of the group by a couple kilometers which gave us a chance to wander around our lunch spot. We came across this very cold waterfall along the way.

I am normally against these types of posts.  In fact, I often cringe when I read people who have decided to write posts about how great things are going.  I especially hate reading posts from people telling me how much money they are making.  Note*** If you are making money, tell us how, at least, otherwise you are just bragging. In fact, in writing the top100 I have often docked people for these types of posts!  However, I felt like I should give an update on things.

I have been trying to be constant as I can, but I’ll be honest in saying that it’s hard.  I’ve been home, and I was working my old job for a little while.  Finding time to write, photograph, and even to go onto the social media to chat with friends.  I have however, been squeezing in any spare time I can do write, and photograph.  The Top 100 itself, in case you were wondering, takes about 10-20 hours a week to do depending on the area I am grading.  If I am grading writing it probably takes about 20 hours.  I would be silly to complain, however.  There was a direct translation between my Top100 list and the overall success of my webpage.  I’m not going to give all the credit, but it definitely brought eyes to my page that may not have been on the page without.  Before coming to Canada I was working about 80 hours a week on various different things, and I was really enjoying things.  Life in Canada, however, has a way to make you feel like there are not enough hours in a day.

The reward that I’ve gotten from the hardwork so far has been great, and that has been the constant support and visits I stand alone, and proud on one of the steepest cliffs of the death road in awe of my surroundings.

from you guys!  I’m constantly blown away by the support I get from all of you.  I started a facebook fanpage on request two days ago on request from a friend.  And actually thought it was a good idea, in this way people can decide whether they want to be hit up with my constant article and photo updates.  I really truly expected that about 20 people would like my page and so far 77 have.  I was also shocked an honoured yesterday with the news that this page, The World is my Jungle Gym was named as the #8 top travel blog for students on a list of the top 150 travel blogs for students.  The webpage has gotten to the point that I don’t even really have to promote it to gain significant traffic, and that is reward enough.  I never in my wildest imagination expected that so many people would actually read the random words that I spit on to paper when I started this page.  I never had the intention of turning this into what it has become, but I am glad it has, and it never could have become without your support.

So far, my site has not made the millions of dollars one would expect.  Actually, I had no idea that sites of this type actually made money when I started this.  As such, I have decided that I’ll always make this site about what really matters, the travel and the people met along the way.  I have made very little bit of cash, and if that doesn’t change I am still happy and will still continue this page!

In sum, I wanted to take this time to thank you all.  I am having a great week, and many of you are to thank for that!