Times Square: Photo of the Week

During my time in New York City this past month the obvious became clear to me: The Big Apple is a photographer’s dream. There are just so many great locations for taking pictures. Times Square, obviously, is one of them. There is just so much going on in the square that it almost sends the senses wild. Moreover, as a photographer it is actually more challenging than one would think. There are so many bright lights and exciting photo moments that it’s hard to concentrate on one single shot. When I went to shoot Times Square the rain was coming down pretty heavily which made getting a shot a little bit of a challenge. However, after wiping my lens down a couple times and with the use of a camera cover, that I like to call a camera condom, I managed to get a couple good photos of the square, including this one. 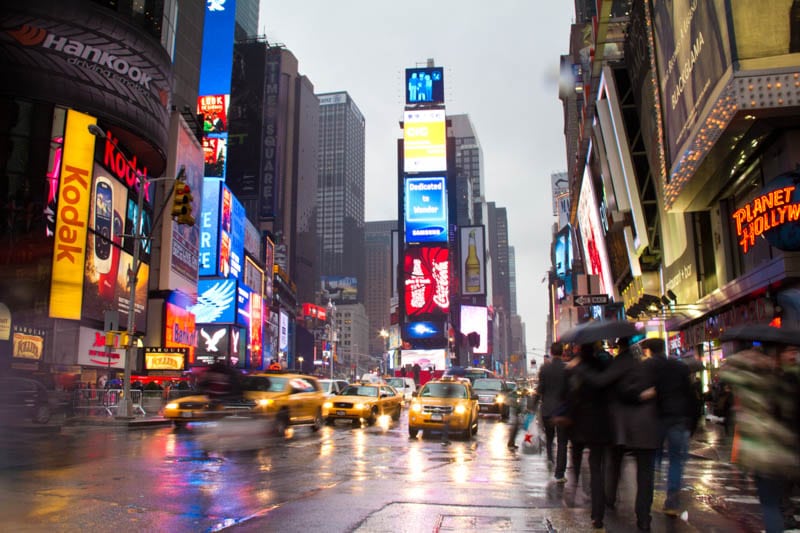 Just because it’s daytime doesn’t mean that you should leave home without your tripod. I pack my tripod everywhere I go, I am tied to it. Without the tripod there is no way I can capture and image like this.  I would have had to shoot at an open aperture and at a shutter speed that stopped the movement in the image. The way I shot this photo of Times Square was simple. I stood at a corner where there was lots of traffic, a good clean view of the lights, and a pedestrian walk. I then put a 0.9 neutral densifying filter on the lens to slow down the shutter speed two stops and waited for the light to change. As soon as the light changed I shot the image not using the shutter button, but using a remote control so that there would be no shake at all. The result was a clean image where the stationary subjects are sharp and still, but the items in motion show their movement. I like how the use of daytime motion and the fact that it was raining outside makes this image look different to other 3 million photos taken in Times Square, New York