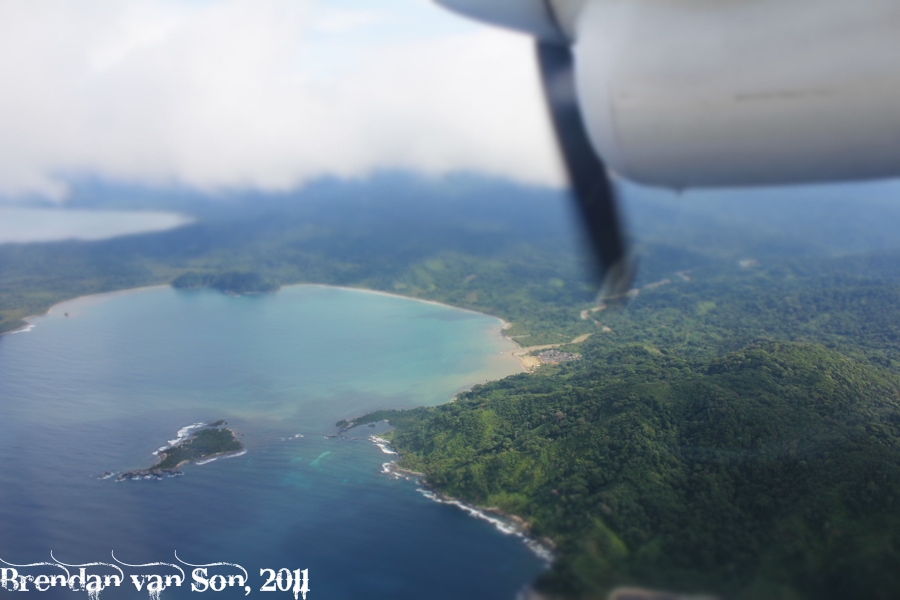 To The Darien Jungle: Panama from Above

About a month ago I made the journey across the Darien Gap. I crossed overland from Puerto Obaldia, Panama to Turbo, Colombia. The Darien Gap is meant to be one of the dangerous places in the Americas, not only for its natural challenges but also because it is the largest route of travel for narco-traffickers between South and North America, it is also a major hiding spot for remaining members of the FARC guerrilla and bandits of all types. I took a route along the comparably safer Caribbean Coast. This is the story of my plane ride to the beginning of my overland journey, the story of the crossing will be featured as the cover story to the inaugural Vagabundo Magazine in December. I hope you enjoy this preview as well as the photos that go along with it.

The shoes of the tiny plane hop quickly from the tarmac which is still wet from a Panamanian afternoon shower. I peer through the tiny oval window which is speckled with rain thinking about where I’m heading: the infamous Darien Jungle. The plane was six hours late in its departure, and the fact that I can see the pilot just feet from me reading a book as he flies us over the capital doesn’t exactly fill me with much confidence either. Perhaps I wasn’t meant to take this flight, maybe I wasn’t supposed to go to the Darien.

The pilot flips the page of his book then does the same to the plane putting it on a bank sideways impressing us with views of the city.

As we make make our way down the coast the plane’s movement seems less like flight and more like hovering. We float over examples of the potential that Panama has for tourism. Beautiful islands poke out of crystal clear waters. A perfect white coast lines a thick green forest as waves turn over just before arriving to their beach destination. Only in a very few cases are the pieces of tropical paradise dotted with houses, only on rare occasions can I see boats touring the waters, and there are nearly no roads what so ever. Perhaps Panama has been forgotten as a travel destination because of the overpowering preconceived notion that this part of the world, right next to Colombia, is dangerous, or maybe its because thoughts of Panama are generally linked directly to the canal that so often unjustly defines the entire country.

Our plane dives from the coast inland and we are given our first glimpse of the Darien Jungle. Like a fortress wall the jungle marks the end of flat farmlands and the beginning of pure wilderness. It’s no wonder that people have chosen this as their place to hide, it’s no wonder that there still exist completely intact populations of indigenous people here in the depth of this rain forest. It almost looks like a fake setting as we fly over it. It is too thick to see individual trees, instead we see a blanket of green foliage which occasionally ripples to form hills.

A bank of mountains appears in the distance still green in colour, but a lighter tone than the low lands. From their heights brown rivers meander like a cobra through forest floor seemingly unsure of which direction to take on their way to the coast.

We make a hard turn to try and avoid a fierce looking cloud which comes alive occasionally with lightning. We bank closely to the mountains as I look around the plane to see if any of the other eight passengers on board seem concerned about the cloud, or the fact that the pilot still remains engrossed by his book; they don’t. I wonder to myself what he’s reading and take a picture of the book to see if I can get a title from the page when I zoom in; I can’t.

Then, through the clouds a hole in the sky opens just wide enough for us to fit through. As we squeeze through it becomes clear to everyone on board that paradise sits somewhere just below us. The other passengers, none of which are tourists seem impressed with the view as well.

Houses dot a calm bay and I realize that we must have arrived. I look into the tiny cockpit to see the pilot put down his book and put his hand on the throttle over his head and put us into a gentle decent. As we hit the pavement the plane jumps a couple times before settling down for good. We are met at the air strip by a curious mix of Spanish speaking people of African decent, Latinos and indigenous people. I take a deep breath, toss my light bag over one shoulder and make my way through the crowds onto the car-free streets and begin my journey to Colombia.

Look for the rest of the story in late December…