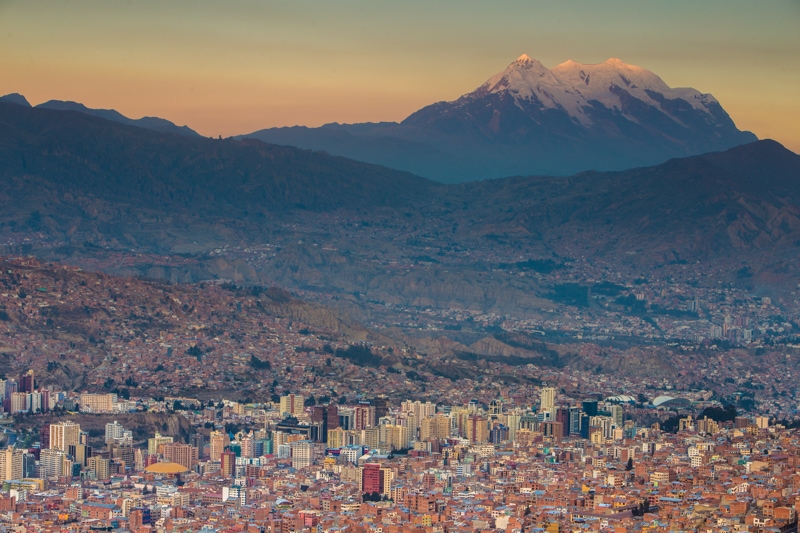 Using a Telephoto Lens for Landscape and Cityscape Photos

The conventional thought among many new photographers is that every lens has a specific purpose.  Among many newbies, each lens is meant to have a very specific job that it is to perform in making a photo.  Wide angle lenses are for landscapes, prime lenses like 50mm and 85mms are meant for portraits, and telephoto lenses are meant for wildlife and sports.  However, that’s just not the case at all.  In fact, as photographers learn with age, using the “wrong” lens is quite often the right choice.  Portraits can look fantastic on an ultra-wide lens in the right situation.  And, in the same light, landscapes and cityscapes can look ultra-dramatic on a telephoto lens.

In my latest video, I take my 70-200mm f/2.8 IS telephoto lens to the hills above La Paz, Bolivia to show you when and why lenses like this can be extremely valuable in landscape photography.

The main reason we use telephoto lenses for landscapes or cityscapes is to compress the scene  What does that mean?  Well, it means that the items in the background seem much closer to the foreground than they actually might be.  A great example is moon photography.  Lots of people see these images of a massive moon behind a skyline and think that it’s either photoshopped or that the moon was somehow bigger on that night.  Reality, however, is that these images are just shot on a telephoto lens – sometimes as much glass as 600mm.  Doing so makes the moon look closer to the foreground simply because it fills much more of the frame.

In the image below of La Paz, the mountain in the background is “my moon” in this scenario.  By using a longer focal length I make the mountain look closer to the city than it actually is.  The truth is, too, if I would have chosen an angle lower to the basin in La Paz, I would have been able to make it look even more dramatic by shooting the skyline and having the mountain look like it’s directly behind it without that empty space.  Next time I get back to La Paz, I’m definitely going to shoot that other angle.  However, this spot was perfect for showing the difference between wide and telephoto.

The Wide-Angle Look of La Paz

So, yeah, it’s a nice look from time to time, and I think that the lesson isn’t that you shoot always shoot telephoto lenses in this situation, but rather you should be using a variety of lenses to capture completely different images.  Don’t get too stuck on one lens.

When to Use a Telephoto Lens for Landscape and Cityscape Photography?

These are a few situations that I tend to put my telephoto lens on when shooting landscapes and cityscapes.  However, there are a thousand different reasons that could be listed.

Other Examples from Around the World

As you’ll see from these other examples taken from different locations around the world, there’s not set formula to using a telephoto lens.  All the images have a different feel too them, and the use of the telephoto is different for each image.  However, the most important thing that the telephoto lens is doing is compressing the scene.

From La Paz, I am heading to the town of Uyuni where I’m going to be doing a 3-day excursion across the Salar de Uyuni and the Bolivian Altiplano.  Then, I’ll be in Argentina for a couple weeks where I’ll visit Mendoza, Buenos Aires, and Iguazu Falls.