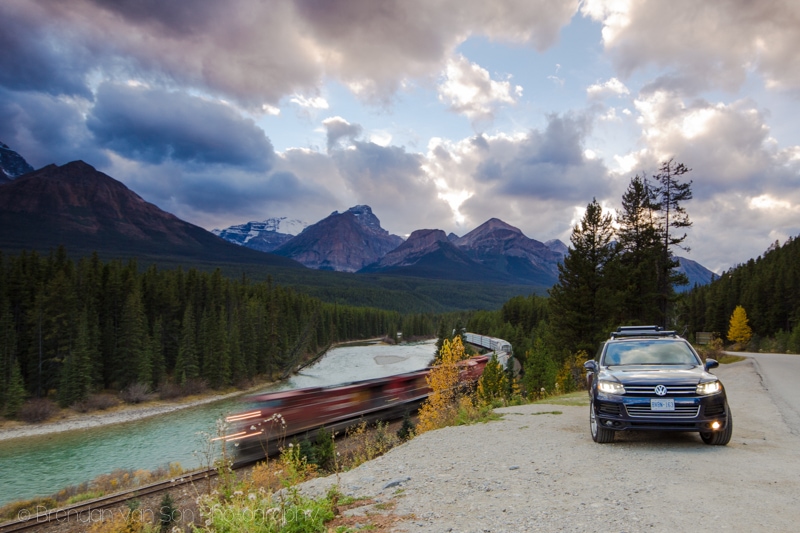 On Location with the Volkswagen Touareg in Banff National Park

Coming home is always fun.  I seem to always leave way too much time between visits to Alberta, though.  This last void was a full 14 months, and it was finally filled after returning with the VIA Rail last week.  This week, I got back to some of my favourite locations in the world behind the steering wheel of a beautiful 2014 Volkswagen Touareg.  The people at Volkswagen Canada were nice enough to let us take their killer ride out to Banff National Park to do some photography and enjoy some remote luxury at the Buffalo Mountain Lodge.  The car was fantastic – and a bit painful to have to return – the Buffalo Mountain Lodge was a beautiful retreat with some of the best food I’ve had in ages, and Banff National Park, well, Banff is always stunning.

Anyways, there’s a video from the on location assignment in Banff National Park below, and below it there is lots of info on the car we tested out, the property we stayed at, and the photos I took.  Check it out.

About the 2014 Volkswagen Touareg

We were lent the beautiful 2014 Volkswagen Touareg for our trip to Banff National Park, and it really was the perfect vehicle for the journey.  It’s versatile, powerful, and easy on the eyes too.  To add to the experience, we were cruising around in the top off the line version of the model given an Execline model with the R-Line upgrades.  These are some quick, non-techie, thoughts on the car.

More people these days are buying their cars based on fuel economy.  Of course, people, especially in Canada, don’t want to give up other things like the size and versatility of the vehicle.  I think the Touareg is a great compromise when it comes to getting the best of all worlds.  The car uses diesel and doesn’t burn through it.  We left Calgary with a full tank, drove over 700km and arrived back in town with just under a quarter tank left.  For a vehicle that pulls 240 horses and 406 pounds-foot of torque, that’s impressive.

The one thing we noticed right away was that the Touareg was really easy to drive, almost too easy.  The vehicle is so quiet that it’s so easy to accidentally bump over the speed limit.  It really doesn’t feel like you’re going fast, when you are.  The lack of noise in the vehicle when driving is amazing.  For Canadians, I think they’ll love the winterized features available.  It has heated seats, a heated steering wheel, and even heated windshield wiping capabilities meaning you’ll not have to spend time scraping your windshield in the winter.  Of course, things like the navigation system, the rear-view camera, parking assist sensors, and other features make it an easy car to move around.

On the road, on top of being comfortable, it also handles really well.  On the highway it was smooth, and in towns I noticed right away that the tight turning radius made it easy to park.  Also, the “always on” 4-wheel drive means that the car has the versatility to handle really well on both the highway and on the rough mountain roads.

In the trunk, there was enough room for both suitcases and I think we probably could have stacked two more.  If not, the backseats fold down and out of the way for even more space.  I don’t see space being an issue for anyone with this vehicle.

From a driver and passenger perspective, the Touareg is extremely comfortable.  The sunroof basically takes up the entire roof and gives you the options of covered or so wide open you almost feel like you’re driving a convertible.  Both the driver and passenger have fully electronic adjustable seats.

But, yeah, that’s all I can think to say now.  I’m a travel photographer, so I’m completely broke.  I can’t even afford a new camera body, which I desperately need.  However, if I was the type of person who lived near the Rockies and was a bit of a weekend warrior, this is exactly the car I would be saving my money to buy.  I loved it.

The Buffalo Mountain Lodge is a great retreat in the Rockies.  Well most of the other hotels in town are right along Banff Avenue in town, this lodge is up on Tunnel Mountains (locally known as Buffalo Mountain because it looks like a sleeping buffalo), and is far quieter and has much more of an “escape” feel to it.

For me, it was the food that set things apart at the Buffalo Mountain Lodge, though.  The meals were out of this world good, and the menu is as “wild” as you’ll find anywhere in Canada.  We had everything from duck to buffalo to elk salami to fresh salmon to that classic Alberta beef, and I promise (mom!) that there were some veggies mixed in there, too.  It really was some of the best eating I’ve done in the past couple years.  So, my compliments to the chef of the lodge.  You, sir, are talented. 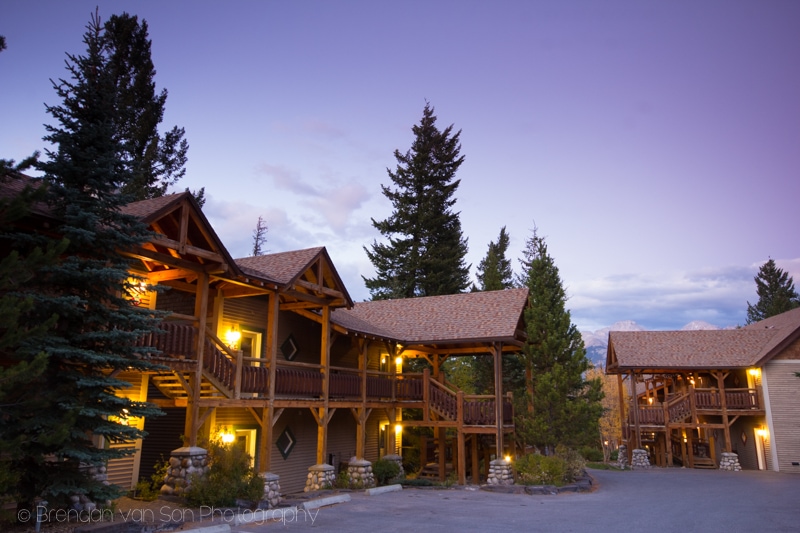 Of course, you want to see the images, don’t you?  A good assortment of the travel photos we took on those 3 days in Banff National Park can be found below.  We got phenomenal light almost every time we went out shooting, which is something extremely rare.  Generally, when you’re doing landscape photography you really hope for 1 cool image a day, and that was definitely done on this trip.  We also saw some wildlife including a black bear and a big bull elk.  I managed to capture the bear, but the elk ran away before I could pull out my 70-200mm lens.

Anyways, enjoy the images from Banff.  There is some info in the captions along with the photo data.

I’m starting to fall behind on things again, here.  There has just been so much going on of late.  3 continents in 3 months; although, that’s nothing new.  I’ve got a lot of reviews to do still.  I’ll be reviewing the Trigger Trap at some point as well as some other goodies, so stay tuned!