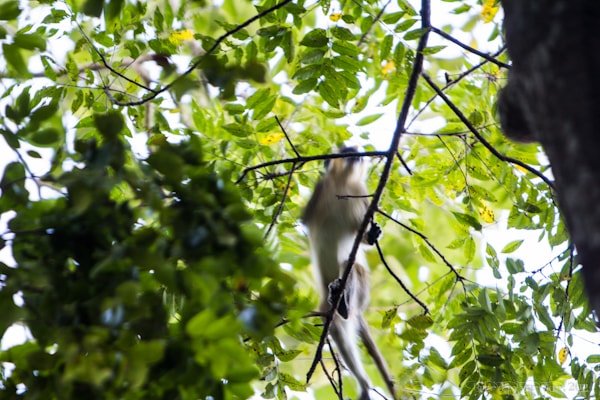 Green Vervet monkeys on the move in the trees.
Travel Photography Blog

Walking in the Footprints of Elephants: Outamba National Park

After my epic journey by moto into Sierra Leone I have arrived at a barely-visited national park called Outamba-Kilimi, or simply OKNP.  I was worried by the tiny amount of literature that I had had read about the park that visiting in the rainy season would be a waste of time.  Water levels in the river makes it nearly impossible to see the pygmy hippos and the thick brush makes it hard to spot the buffaloes, duikers and other animals in the park during the rainy season. But still I made the journey; it was on the way after all.

I am met at the park’s wilderness camp by a surprised guard who has not seen a visitor for over 50 days and even then it was a group of 4 Sierra Leoneans.

Before night falls on the first night, and as I sit on the river’s edge sipping cheap whisky, I am greeted at first by the sound of Chimpanzees across the river, and later a troop of monkeys right above me.  It would appear that in Outamba National Park wildlife surrounds me at every turn.  But as I will find out, the signs of these animals are easy to find, but making visual contact is much more difficult.

In the pitch black night, there are no lights or electricity in Outamba-Kilimi, the sounds of the jungle spring to life.  Monkeys continue to chatter in the trees above me, a warthog grunts from the brush and off in the distance I hear a light trumpeting ring out through the humid night air: Elephants.

I leave on a trek at first light next morning with a guide who must not stand much more than 5 feet tall and speaks only a touch of English mixed with Krio.  But for what he lacks in English he makes up for in eye and ability.  Within an hour we have spotted tracks of forest buffalo, duikers, deer, warthogs, and even a couple unmistakable elephant prints.

Although we have seen only tracks thus far, and a couple chimpanzee nests, the guide lets me know that the wildlife is all around us; they are hidden within the thick walls of the 8 foot high grasses.  The animals may be just 10 feet away from us, but as soon as they sense our presence they hide.

After the heavy midday rains pass, we head out again and this time the remnants of activity are much more powerful.  Within the forest, we walk a narrow trail, but it soon widens as it looks as if a bulldozer has barged through.  In the heart of the destruction there are dozens of elephant prints big enough for me to stand in.

“These are fresh,” the guide says partly excited and with a look of slightly worry in his eye. “They were here after the rain this afternoon.”

“Can we follow them?” I say dying to see a forest elephant in the wild and perhaps willing to do so to see one.

“Small danger,” the guide says concerned for a moment before shrugging and pulling his machete from its hold. “Make haste!”

As we walk the trail, the signs of the great animals become fresher, usually in the form of warm piles of dung the size of a round sofa cushion.  The guide tells me that it must be a whole group to do this much destruction.  Such force and power makes me shake my head as we march slowly through the wreckage.

“Come quick!” The guide says as he has heard something ahead.

I run through the trail of carnage and we do so for about 400 meters before the guide realizes that the noise he heard means the end of our trail.  The elephants have made their way into the river and likely swam across and well out of our view.  Unfortunately, I will not see forest elephants on this trip, though I can definitely say I felt their presence.

I am left by myself during the night and can’t help but think about how power a place this is, a true Eden left unspoiled by man and tourism.  Sure, it would be great if viewing towers and rainforest canopies were built to allow us greater opportunities to see the wildlife.  But at the end of the day, the fact is that the park’s underdevelopment is the exact reason it is still so well preserved.  It is the reason rare pygmy hippos still wade through the waters, chimps still swing through the trees, and forest elephants still barge through the brush leaving their behind only their footprints.