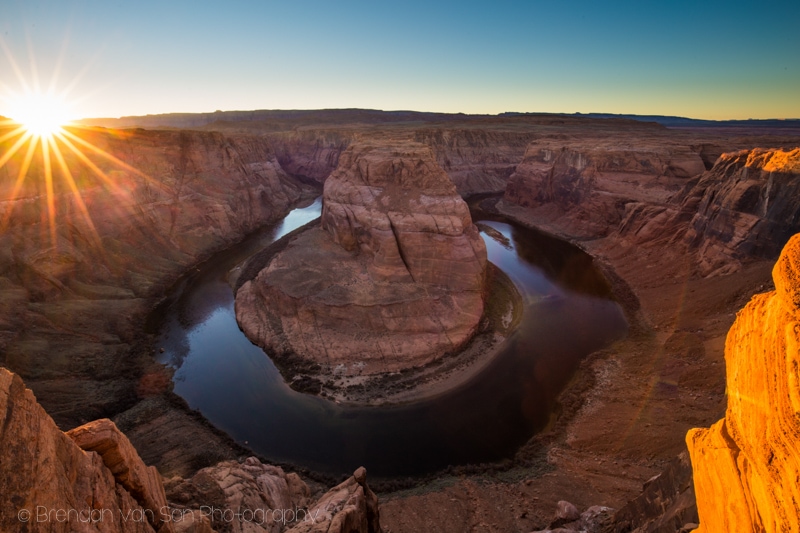 When is the Right Time of Day to Photograph Horseshoe Bend

The rumors of the beauty of Horseshoe Bend, one of the most photographed locations in America, are not exaggerated.  That, and the ease of access its location just outside of Page, Arizona, also means that you’re not going to be alone when you visit Horseshoe Bend; not by any stretch of the imagination.  In fact, when I visited the bend there were people lining the canyon cliff across the entire brim.  To be honest, I have no idea how more people don’t fall to their death here.  So many stupid tourists hanging off doing selfies, and even more stupid photographers (myself included) standing tiptoes on the cliff edge to get the best angle.

All that said, Horseshoe Bend is a fairly easy place to get photos despite the crowds.  Since the area is fairly spread out, it’s not too hard to find a spot to set up shop and shoot some classic American imagery.  Thus, the question becomes not how to shoot the location but when.  And, I suppose, a lot of that comes down to personal preference.

Have a look at my video to see the 3 different times of day I photographed Horseshoe Bend.  Or, if you prefer to read, the article and information is below.

For most photographers, this is the time of day to shoot the canyon.  However, you have a number of obstacles to overcome.  For one, this seems to be the busiest time of day at the bend.  And the truth is, the tourists aren’t that big of a deal because they come and go and you can slide into their spot for your photos.  However, if you come too late, the photographers have already scooped up the best spots and they don’t move.

The other issue is the strong back light can create all sort of lens flare.  Especially if you’re using a filter to darken the sky, you’re going to get some nasty flare.  I got a tonne, and it didn’t help that I don’t have a reverse ND filter.  I tried to combat the problem by blocking out the sun with my finger, but still didn’t have much luck.  Thankfully, when the sun hit the horizon and was softer, it didn’t cause an issue and I managed to get a cool image with the sun starred as it was crossing the hills.

Personally, this was my favourite time, especially at dawn.  In the morning, you have way fewer people there.  I think prior to sunrise, there was only about 6 people at the park, which was really nice.  Most of the other people there were photographers as well so there was some nice camaraderie there, too.  This was also the easiest light to shoot.  There were no exposure issues or need for filters, you could really just shoot it.  That said, I think the images from sunset and sunrise were more visually powerful.  The dawn images have nice colour to them, but they are lacking that “wow” factor, I think. 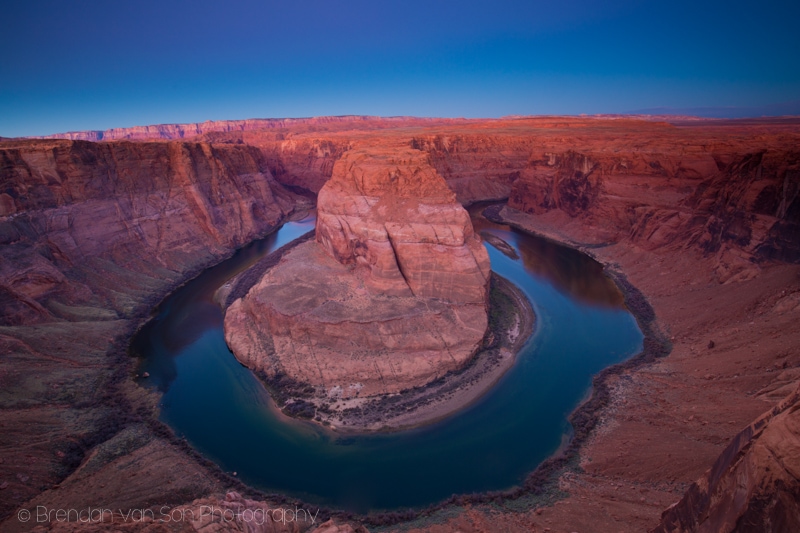 Sunrise was awesome, but a bit of a challenge, too.  I wanted to capture some of the early sun’s glow on the mountains in the background of the bend.  However, it was so flat back there that it hardly shows.  Shooting the wide angle lens also meant that the hills in the background looked smaller than they look to the eye.  Also, by the time the glow hit the ground, a lot of the colour disappeared from the sky.  That said, my experience at Horseshoe Bend was far better at dawn and then sunrise than it was at sunset. There were no screaming Chinese tour groups like there were at sunset, although 2 buses full poured in as soon as we were leaving.  If you want  an experience with nature, here, you have to go at sunrise. 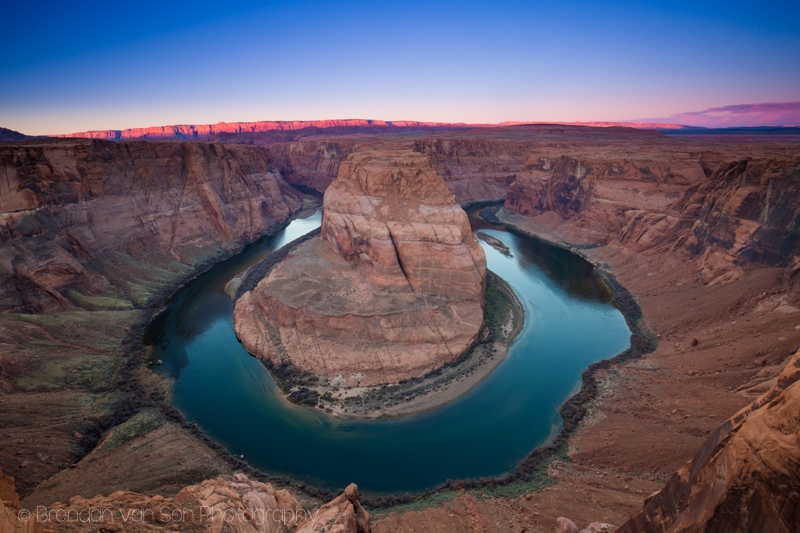 Photographing Horseshoe Bend Under the Stars?

I really wanted to photograph Horseshoe Bend under the stars, but I was too tired from driving.  I think it would have been a challenge anyways.  There was a nice bit of moon light cast on the bend, but the conditions would have had to be perfect to bring out the details in the canyon.  I think, if you’re planning on shooting the bend under the stars, you’ll need to do a composite image using one image taken in dusk/dawn and one of the stars.  I don’t have the patience to do that sort of thing after a full day on the road.

It’s beautiful, but there are really only a couple shots you can get.  Of course, the classic wide angle image is cool.  But other than that, the scene is too wide to do much else.  If you want to get more than the same shot as everyone else, you’ll have to integrate people at this location.

As for the scene itself, I shot all my images at 16mm or around that.  I can’t imaging being able to shoot a lens that didn’t go that wide and capturing the whole bend and canyon.

Getting to Horseshoe Bend

The GPS Coordinates to the parking lot are 36.877, -111.5 and that’s basically right on route 89 just south of Page.  From there, it’s about a 10 minute walk trough the desert to get to the bend.  At the bend itself, you can scatter about quite a bit so the crowds aren’t as bad as they first might seem.  If you come during peak hour, the parking lot might be full.  If so, you can just park right along highway 89 and walk in from there.

There is no entrance fee to Horseshoe Bend.

I have a comparison article between the Canon 6D and 7D Mark ii. Then, I’m off on a hike into Havasu Canyon before continuing my road trip across The States.