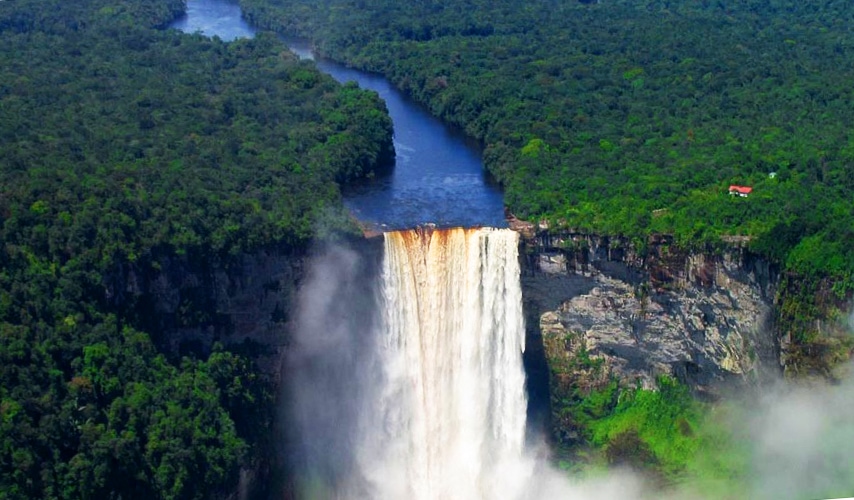 The Guianas find themselves almost entirely forgotten within the South American continent. In fact, ask many people from the nearby country of Venezuela and many don’t have a clue where these three countries (French Guiana, Guyana and Suriname) sit, despite the fact that Venezuela shares a border with Guyana. The truth is you can’t really blame the region for forgetting about these three obscure countries tucked in the north-eastern corner of South America. Culturally, physically, and economically they have very little in common. The reason that the backpackers have missed out on these countries for so long borders on confusing. These are my reasons why the Guianas should be a backpacking hotspot, and why they aren’t.

It’s cheap: Well, it’s not exactly Bolivia cheap or anything, and French Guyana holds it’s challenges, but the truth is that if you make some sacrifices travelling the Guianas can be very cost-efficient. Combined through the three countries I averaged about 35US$ a day. In Brazil, I had to spend between 50-55$ to travel properly.

Culture: I’m not sure there’s anywhere in the world where cultures collide so beautifully as they do in the Guianas. Mix he Caribbean, Africa, East Asia and Europe culturally and you have the Guianas. From marooned African enclaves in the jungles of French Guyana to the European urban dwellers in Paramaribo to some still uncontacted indigenous people in the Amazon basin people from all over the world are represented in this small section of the world.

Natural Wonder: Can you name the world’s highest free-falling (no ricochet) waterfall? Kaieteur Falls in Guyana. Beyond the waterfall some of the most pristine sections of rainforest in the world exist in these countries bursting with wildlife.  Furthermore, the coast of the Guianas is home to some of the largest breeding ground for the incredible leatherback sea turtles.  Knowing those things alone makes the average traveller more excited about the countries.

Adventure: Backpackers used to relish in the idea of hitting the road less travelled. They used to head to places people hadn’t heard of, places still waiting to be discovered. Now it seems they are more concerned with finding cheap alcohol. Maybe backpackers are getting lazy, or maybe I’m just getting jaded. Regardless the backpackers should be relishing in the opportunity to explore such an amazing place which has to date been left largely unexplored.

Why you haven’t Gone

They are Expensive: Well, that is the rumour anyways. The myth that the Guianas are impossible to travel without deep pockets is untrue and it’s something I proved wrong. I challenged French Guiana, the most expensive country in South America, and managed to spend only 25$ a day on my time there.  Through the other countries I lived extravagantly in private rooms and eating out every day for about 40US$, I could have done it for about 30-35$.

Location: It’s true, if the Guianas were wedged in between Brazil and Argentina more people would stop in and say hi. However, being placed in the obscure locale of between the north of Brazil and south of Venezuela surely doesn’t help.  The nearest city of value to any of the Guianas is Belem, Brazil a journey that will take at least 2 days overland.

Size: Being a small underdeveloped country without a huge population of tourists means that there are simply not that many flights. Yes there are direct flights between France and French Guiana, but good luck finding regular flights from North America, or even other South American countries. The total population of all three countries is no more that about 1.5 million people. I’m sure most people can name a city within a couple hours drive of where they live of a greater population than that.

Poorly Promoted: As usual, I sent off emails to the country’s official tourism boards before leaving for the Guianas. I received no response, not from a single agent. When I arrived in French Guiana I went to the tourism board to find a great office full of great information. When I asked about my email they said in colourful french, “Oh, you’re Brendan, we have been meaning to get back to you.” In Guyana I learned from one of the members of the private sector’s tourism association that the government’s board is borders on useless and is horribly underfunded. How can people want to visit your country if they don’t even know it exists? For tourism to get a boost in a country it needs a major draw. Peru has Machu Picchu, India the Taj Mahal, and Kenya the wildlife. The Guianas have plenty of draws, but how can a “bug zapper” lead the mosquitoes to its trap if it’s turned off?