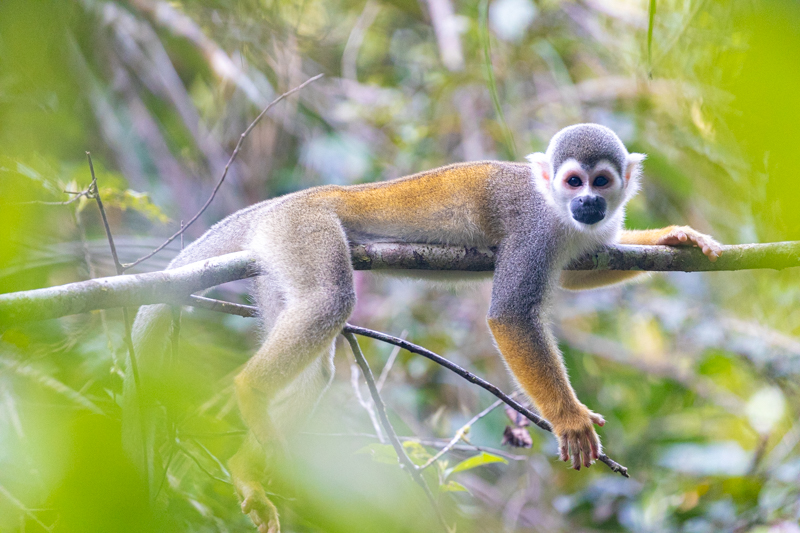 In the video below, I talk about some of these tips. But, as usual, if you’re the type that prefers a simple set of text words and photos scroll down.

The Locations in Ecuador

This post is actually ahead of the vlog a bit. I’ve decided to drop photos from some upcoming videos in The Galapagos as well as some photos from our trip to the Ecuadorian Amazon.  However, all these photos are from our 8 day trip to Ecuador.  I think there’s some pretty good examples of the wildlife photography composition tips and techniques I share in this post.  I hope you enjoy the photos as much as I enjoyed making them.

I’m sure there are far more tips than I have for you here.  Obviously, I’m a travel photographer and not a wildlife photography like my partner in crime here on the islands.  But, I do spend quite a bit of time out in the world on safari in places like Namibia, South Africa, and Antarctica.  I love wildlife photography, and I hope my love for animals comes through in my photos.

Get Eye Level to the Animal

One of the first tips for wildlife composition I learned was to get to eye level of the animal.  By photographing an animal at their eye level it gives the truest representation of it.  Lots of newer photographers tend to photograph wildlife from their own eye level.  When you do that, it makes the animal look small and potentially weak and inferior. Eye level to a marine iguana 3 inches off the ground might not be easy, but it’s always worth it.

Think About the Background

When it comes to wildlife photography, the background is often as important as the animal.  If you don’t have the right background for your photo it can create a distracting element in the photo.  A great background can work as a frame.  Or, a simple background can at least leave the viewers focus on the subject.

Sometimes with background, it’s just a matter of moving a couple inches to your left or right to put the animal in the right part of the background.

In almost all forms of photography, the challenge is creating depth.  Photos, unlike the human eye, is 2D.  So, we need to find ways to give a 3d perspective to our images. Depth does that.  In wildlife photography, the simplest way to create depth is by using shallow depths of field and finding elements to put in the foreground of your photo.  You should also try to photograph animals that are far enough away from the background elements that it blurs out as well.

Often, it might not seem like there’s any way to find depth for an image.  But, if you find a tree, shrubs, or really anything to shoot through, you can create a bit of a dreamy blur affect.

Obviously, when I say not to cage the animal I don’t mean that physically.  What I mean is that you don’t make a crop of the image so tight around the subject so there’s no where for it to go in the frame.  So much of wildlife photography is about creating a story to play out in the imagination of the viewer. If you crop the animal too tightly, the story is caged. Give some breathing room around the wildlife in your photos – especially in the direction they appear to be travelling – to allow a viewer to better imagine a story.

The obvious opposite to the previous composition tip is filling the frame. And, it might seem totally contradictory to have both. But, when I say “fill the frame” I don’t mean to crop tight. What I mean is using a part of the animal to almost create an abstract image.  If you fill the frame with a pattern from a Nazca Booby, for example, it can make for a very cool fine art style image.

The Rule of Left to Right?

Getting back to the eye level composition tip, changing the perspective changes the story.  Just like if you bring the camera to the eye level of an animal gives the truest representation of the animal, changing that level changes the story.  Generally, if you photograph wildlife from a higher perspective it can make the animal look a little bit weak.  Alternatively, if you get really low and photograph upwards it can make wildlife look really powerful. Depending on the story you’re trying to tell with your wildlife photography, either can be very effective.

Sometimes we try to create depth with our wildlife photos. Other times the best thing to do is go as minimalist as possible.  In minimalism photography, the goal is to have as few elements as possible in the photo.  In fact, you often don’t even need the full animal in the photo.  It’s about keeping things simple, and about isolating the image. For the most part, this is seen as fine art wildlife photography.  It’s a fun technique to play with in situations where you might not be photographing the most exciting animal in the world.

There’s No Such Thing as Bad Light

One of my favourite things Morten Hilmer mentioned on our tour in Ecuador is that in wildlife photography there’s no such thing as bad light, just different light.  I like that about photographing animals. In landscape photography, there are definitely good and bad lights.  In wildlife photography, you can play with the light available in different ways to make totally different images.  For example, with an overcast sky in the middle of the day you can play with minimalist images like the one above. Or, in a heavily back-lit scene you can silhouette your subject like this image of the pelican.

It’s easy to think that wildlife photography is about capturing the animals. But, the habitat of wildlife is so important to not only the photo but also the conservation of wild animals. It’s easy for viewers to see these animals and forget that they need habitat to survive.  It’s important to showcase their habitat in the photos when you can.

Don’t be Afraid to Experiment

One of the hardest things about basically all kinds of photography is finding inspiration.  It’s easy to photograph the wildlife in places like the Galapagos Islands and The Amazon because it’s exciting and exotic. It’s much harder to photograph squirrels and ducks in your local park.

However, having an experimental type of photography to play with can make that much more exciting.  In the Galapagos, I messed around with some long exposure photos of sally lightfoot crabs on the rocks getting hit by waves. I’m really happy with the results.

Want To Join Us in Ecuador?

The 2019 trip to Ecuador was incredible. And we’ll definitely be doing that again at some point.  We’re looking at 2022 as the next time we’ll be offering a wildlife photography trip to The Amazon and The Galapagos Islands. If you’re interested in joining that trip, please sign up below to get email notifications of upcoming trips.

In the meantime, we still have space on our Morocco trip in March.  The next tour with space available is Georgia in July!

More on The Photography Blog

I’m in the US getting caught up on work – as you can probably tell by the abundance of blog posts this past couple weeks.  Part of that catch up is getting all these unpublished posts done from recent trips to places like Nepal.  I should also have some new camera gear soon to play with and review. So, stay tuned to this blog for plenty more photography.