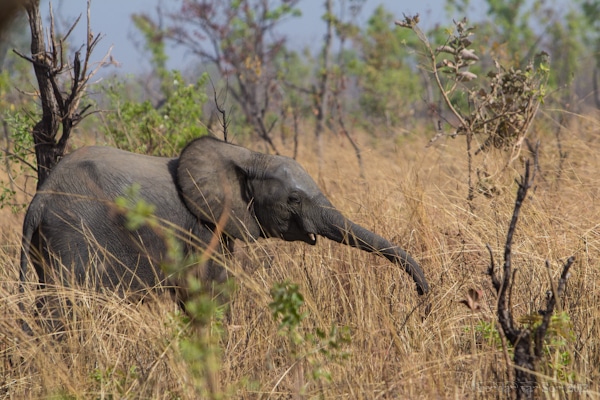 “Can I get to the ranch on my moto?” I ask confidently to the short man in a polo shirt seated at a gate painted with cartoons of antelope, warthogs and elephants.  “Is the road alright?”

He presses his hands against the hard plastic arm rests of his chair and sluggishly walks towards me, looking me up and down, judging my strength, my will, and my ambition.  He shakes his head.

“The road is bad, but that’s not the problem” he tells with a look of disappointment on his face.  “There is way too much activity on the road into Nazinga right now.  There are elephants all over it.  If they see you on your moto, you won’t be able to get away in the sand.  It’s too dangerous, you couldn’t pay me to do it myself.  I can’t stop you from going, but I can’t recommend it.”

Reluctantly, I weigh my options.  On one hand, the idea of seeing the elephants of Ranch de Nazinga, Burkina Faso‘s premier wildlife viewing park, from the backs of my scooter would make for an amazing experience, and a great story.  However, I’ve never seen elephants in the wild before.  I don’t know how they behave, I don’t know how they react, and I don’t know how to escape their charge.  It’s the dilemma I so often face, the risk of personal harm versus the reward of a great story.  Unlike most times, I choose the safe route on this occasion.

I toss my bag into the backseat of a land cruiser and we bump our way through the sandy roads of Nazinga.  We’re surrounded by scrub, tall grass, and a sense of adventure that I can’t shake.  As we drive, the chauffeur points to various waterholes and clearings while mentioning constantly how the elephants were there just a few hours ago; right now they’re nowhere to be found.

We arrive at the Ranch and I once again have come up empty in my goal of seeing elephants in the wild.

Twenty minutes later a group of French tourists roll in all laughing and brimming with excitement.  Just down the road, they say, they saw a group of seven elephants.  I missed them by that much.

Following an assault in which I’m attacked by the sight of a half dozen LCD screens laden with pictures of elephants shot at fairly close distance as the French tourists brag and gloat, I head to bed hoping not to get shut out again tomorrow.  The wildlife lover in me has been dying to see elephants from the moment I arrived in Africa, more so than lions even, but the competitor in me can’t deal with all these failed runs.  Especially if the French are seeing them.

The morning starts out calm.  The cold winter desert air somehow adds to the excitement.  We stop constantly as the guide points off in the distance at antelopes, warthogs, baboons, and birds.  After about a dozen or so stops I look back at my guide and tell him that we’re not going to stop for antelopes anymore until we see elephants.  He laughs, and points ahead.

In the distance, like grey stones standing in the desert, I see the backs of what I’m told are elephants.  Soon, a tossing of orange dust in the air makes it clear.  We pull the land cruiser within a safe distance from the world’s largest land mammals.  There are few things more humbling than standing meters from these great animals.

Unlike many of my other experiences, I don’t race to get as many photos as I can.  Instead, I sit on the sill of the vehicle’s window and enjoy the moment, breathe it in, experience it.

The family is made up of a giant bull who is missing one of his tusks.  He stands in the distance among trees as if he’s hiding himself.  The protective mother stands proud alongside a couple of her young offspring as well as her fairly newborn calf.  It’s the calf that draws my interest.  The young elephant seems to smile as it races around following the leaders of the herd.  It dances in the dusty air as the rest of the family stares in protection. It’s a moment of peace.  An instant in which the connection between human and wild seems so strong, but the tension so thin.

With a trumpet and a showing of the ears, the big bull decides he’s had enough of our presence and begins to chase us.  The driver hits the gas pedal with emphasis and as I slide back into the vehicle everyone is laughing.  I’m sure that had I been on the scooter it wouldn’t have been nearly as funny.  The elephant chased us a good 200 meters through thick sand before relenting.

“I don’t want to disturb them any more,” I say to the driver who seems primed to do another pass of the great elephant family.  “Let’s continue.  And we can stop for antelopes and baboons again now.”