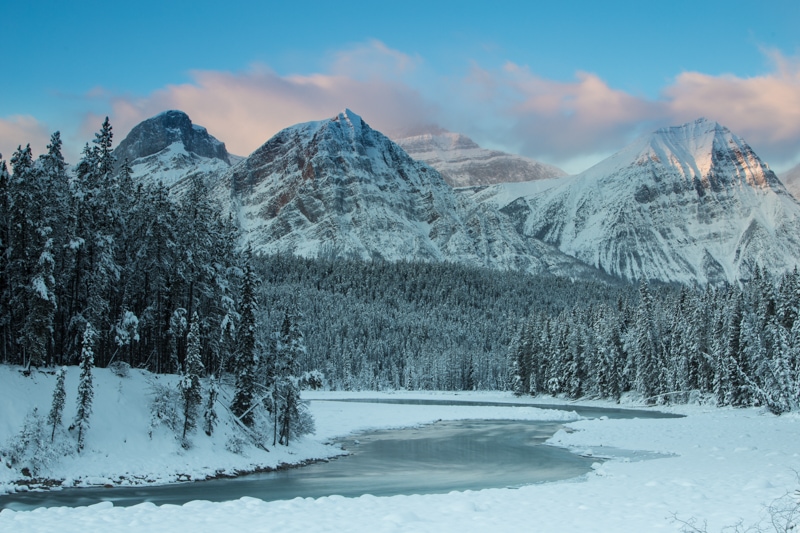 Winter on the Icefields Parkway

After finishing up in Jasper, I had to get back to Calgary – the city where I went to university and where most of my friends and family live.  My buddy Jeff Bartlett (check out his portfolio here) was kind enough to drive me down the Icefields Parkway and then through Kananaskis to get me home.  Of course, a couple photographers can’t just drive through the mountains without shooting them.  And, Alberta got a tonne of fresh snow so we really did make some fresh tracks and have beautiful white snow to work with.  The Icefields Parkway in the wintertime is one of the most beautiful places on earth.  Then again, it’s stunning any time of year.


This was our day driving one of the most spectacular roads in the world.

Is the Icefields Parkway open in the Winter?

The short answer is, yes the Icefields parkway is open in the winter.  In fact, it’s the highest elevation road in all of Canada that’s open year round.   However, that’s not to say that the road doesn’t close.  The road can close throughout the winter for a number of reasons.  The first, of course, being a winter storm or incredibly icy roads.  The road can also be closed because of avalanches (both natural and ones triggered on purpose by the park), rockslides, and other reasons.  A trip down the parkway is never a guarantee in the winter, so always be prepared to have enough time to drive around if you need to get from Jasper to Banff or farther south.

Again, the road conditions on the Icefields Parkway really depend day-to-day.  It depends on whether the snowplows have been over it after snow, if there’s enough salt and dirt laid down for traction, and how much ice is on the road.  Before you set off to drive the road in the winter, be sure that you ask about the conditions. Also, you probably don’t want to cruise down the road in a little city car with summer tires.  And, no matter what you choose to drive be sure you’re prepared with warm clothes and some snacks in case you get stuck, have an accident, or have car trouble.

Locations worth Photographing on the Icefields Parkway in Winter

Winter is tricky to shoot photography in the Rockies for the simple fact that most of the lakes are completely frozen over by late December or early January.  Thus, I like to find open pieces of water along the Athabasca Glacier, or head for the larger lakes that tend to stay open for a bit longer.  On our trip, we found that Peyto and Bow Lake were still open, so they made for great subjects to photograph.  There are also a couple spots where there are frozen waterfalls that make for cool photos.  In particular, Tangle Falls looks very cool when it’s just a series of icicles.

Jeff and I went out location scouting in Kananaskis Country at the end of the day.  We weren’t exactly looking to take images, but find a cool place to photograph in the future.  We found a trail up the side of a mountain between upper and lower Kananaskis Lakes which led us to an awesome viewpoint.  There was a snow-shoe made trail there for us, but it was a bit icy and pretty challenging.  Still, the views from the top were so worth it.  It took us about 45 minutes to climb, and about 15 to come down.

In my video I said that it was my last episode from Alberta, but I had totally forgotten that I went into Banff National Park to shoot night photography! How could I forget, that night was one of the most epic nights of shooting I have on memory.  Stay tuned for that episode, and then I’m off to Europe.