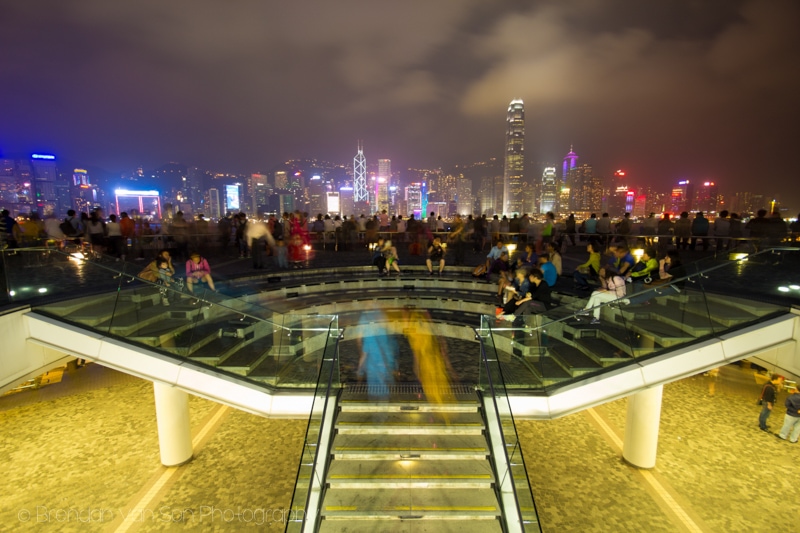 I wanted to get a little bit creative with my shot of the Hong Kong skyline so I tried something a bit different. I found this walkway up to the viewing platform and shot the crowds in front of the platform with the cool lines.
PhotographyTravel Photography Blog

3 Skylines of Hong Kong and How I Photographed them

It’s Hong Kong week here on Brendan’s Adventures.  Remember, that at the start of June the format of this blog will change to become far more travel photography focused.  Until then, Hong Kong week!

Of all the skylines in the world, Hong Kong is among the best. Sure, there are no defining features to it like the CN Tower in Toronto or the Brooklyn Bridge in New York, however it’s just a clean, cool skyline to photograph. It had been a while since I shot the a really nice skyline, all the way back to Singapore, so I did my best to shoot the Hong Kong skyline from as many places as I could. These are the three spots I shot it, and how I took the pictures.

Victoria Peak was the first place I really wanted to shoot in Hong Kong. It’s such an interesting perspective to photograph a skyline from above. Sure, there are places where you can photograph skylines from the top of a building, but I can’t think of anywhere you could shoot a skyline from this high up.

If you want to photograph the skyline of Hong Kong from Victoria’s Peak you have two or three options. For me the best bet is to get out of the tram station and look for the path that leads to the right if the skyline is at your back. Walk along that trail and there are 3 or 4 clean spots you can shoot. You might want to get there early as there are always 5 to 10 other photographers up there too. You can also shoot from the pagoda which is right next to the tram station to the left if your back is to the skyline. However, it gets crowded. If you’re not short on money, you can also take photos from the top of the tram building itself. You get clean lines from up there, but have to pay extra.

Around the Convention Center

Just down from the Renaissance Harbourview Hotel and the ferry crossing is the convention center. If you circle along in front of the convention center there are some cool places to shoot that section of the Hong Kong skyline that are really worthy. You wont get the entire skyline like the other two options, but you’ll have far more opportunities to be creative with your lines.

Don’t bother trying to photograph on the ferry side of the convention center as a tonne of boat trips come across there and will ruin all of your shots. Moreover, there is a messy construction scene there at the moment anyways.

If you’re looking for a really clean, classic photo of the Hong Kong skyline, this is the safest bet. You’re over on Kowloon so you’ll have a straight shot angle over at Hong Kong Island. It’s a big open walkway over there, so you’ll likely have little problem finding a place to photograph from. However, I’d get there quite early as there are countless photographers there every night shooting images, not to mention the thousands of smartphone wielding photographers trying to get selfies in front of the skyline.

My favourite spot along the waterfront was at the elevated viewing area right near the Tsim Sha Tsui clock tower. However, you have to be patient as there is a lot of ferry movement and their light trails can easily ruin your photos.  You’ll also find some nice lines down along the Avenue of the Stars.

Obviously, there are other alternatives. If you have some, I’d love to hear what your favourite places to shoot the skyline in Hong Kong from are.

I hear a lot of people saying they like taking photos from the ferry. And while that’s completely true, it really only works to take simple photos as the boat is obviously moving. If all you want is a smartphone photo, then the ferries are actually a great way to get a cool vantage point of the city.