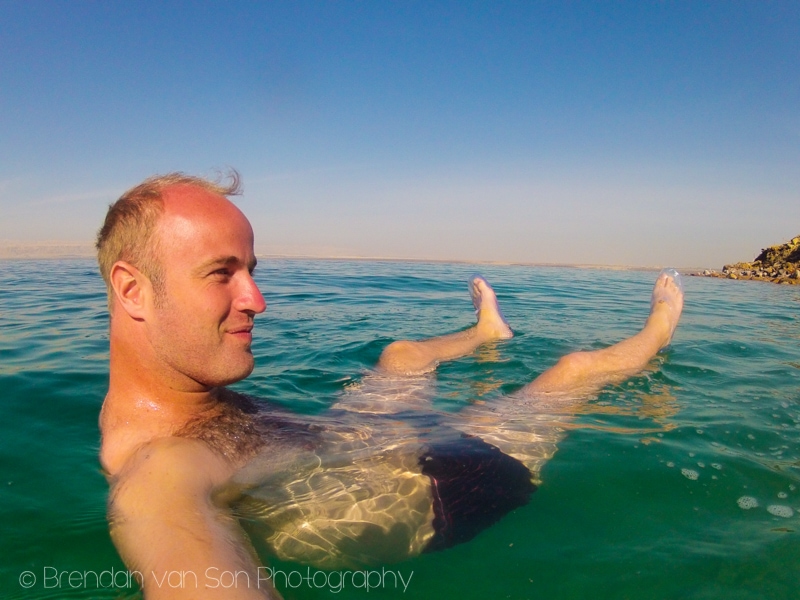 Awkward Massages and the Dead Sea

Before heading back towards Aqaba, our exploration through Jordan was meant to make a turn for the more relaxing.  We had sped along the humbling canyon edges of the countryside to the country’s Dead Sea Zone.  After a couple near-sleepless days in one of the wonders of the world, and being far too excited by the prospect of seeing Petra by Night, a healthy break was not only a desire, but a necessity.

After arriving at the Marriott Dead Sea just after sunset, most of us were too tired to even eat.  We sat at the grand buffet with plates full of delicious Jordanian food, just staring at it, too hungry not to eat, and too weak to chew.  If you could digest hummus via intravenous, believe me, I would have been laying in bed with a bag of those magical mashed up chickpeas above me. 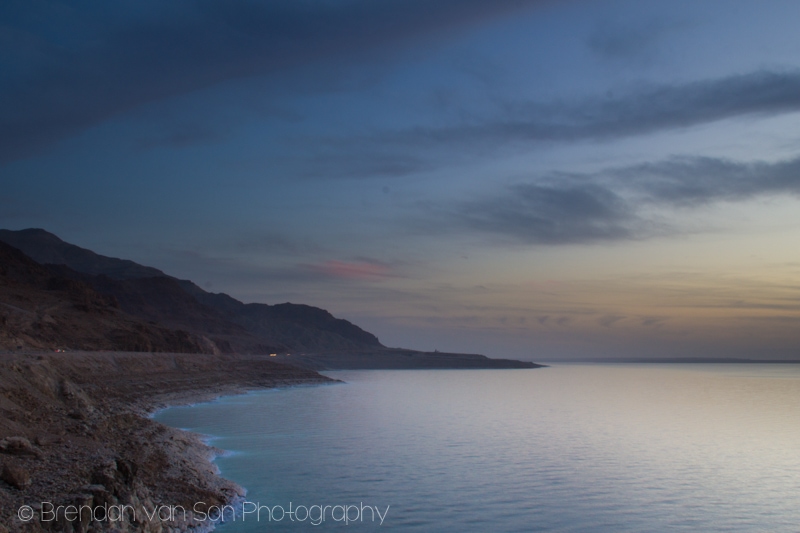 A night of sleep served me well, and waking up the perfect blue skies of the Dead Sea seemed to press energy back into my skin.

On the schedule for the day, a swim in the Dead Sea, and a massage.

I have to be honest, whenever I had seen photos of people swimming in the Dead Sea, that classic pose and float seemed so cheesy to me.  “Oh look at me, I’m floating in water!”  It wasn’t in my plans to be that guy too.  But, there’s something that should be said for any experience: you don’t know what it’s like until you try it.  Covered in mud, I tried it.

After about 2 steps into the Dead Sea, I was already giggling like a baby playing peek-a-boo.  It’s such a foreign feeling floating to effortlessly.  It’s such a confusing state of being.  Barely waist deep and you’re feet already life from the floor and your body becomes top heavy forcing your face down towards the water’s surface.  You might not be able to sink in the Dead Sea, but you could certainly drown. 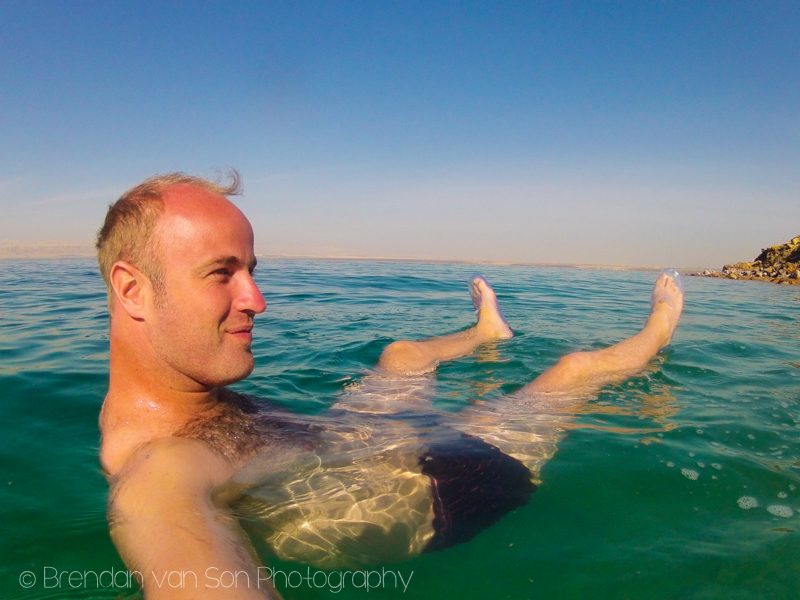 Once you give way to the water’s extreme buoyancy capabilities, it’s incredible relaxing.  However, it can hardly be called a swim when two-thirds of your body is above water.  In fact, the fat in my ever-growing ass (thanks a lot hummus), is basically the only thing that needs to be under water for me to float.  I’d been in the water for 10-minutes and my hair wasn’t even wet.

After a while though, it all started to sting.  The high salt content which is meant to be a healing property began eating at the wounds left over from the previous day’s donkey trekking in Petra and the sunburns that are peeling on my neck.

A massage was booked for us at the Marriott’s spa, but little do the people know who have booked it, I hate massages.  They make me feel uncomfortable, they hurt, and they make me feel like a bit of a dick, for whatever reason. 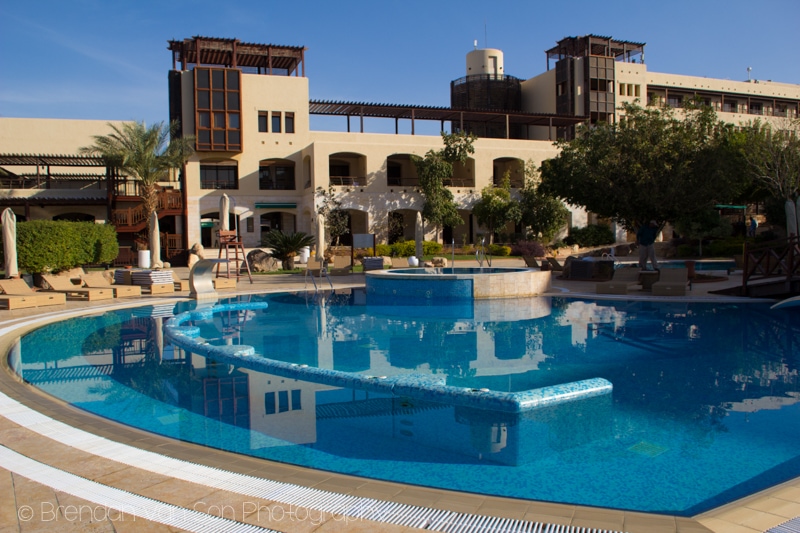 I was met by a Russian woman, about my height and three-times my girth, upon entry to the spa.  She shook my hand with rigour and led me into a room filled with candles, melancholy music, and some rocks set on heaters.  She ordered me to de-robe before demanding me to lay on the mat on my stomach with my face stuffed into a hole.  I can drive a scooter down Africa, but it’s a luxury massage that has me uncomfortable.

With oil-soaked hands she pressed into my skin and with each movement my thoughts followed the lines of “oh, that feels good. Wait, damn that hurts!“.  With the finish to every movement, it’s like my muscles are snapping on the inside.

“Are you relaxed?” She questioned obviously sensing the tension in my muscles.

“Are you?” She questioned again with an angry edge to her voice. “This is relaxed!?!”

I laughed, and she followed by telling me that I have to let the pain heal me.  I laughed again, and did my best to ease my body.

Later, she settled hot rocks on my skin in strategic locations.  The heat wasn’t unbearable, but it wasn’t comfortable either.  I squirmed.  She lifted the rocks, let’s them cool a moment and then dropped them again.  Eventually, my body was almost completely covered in rocks.  I fell asleep in a warm cocoon of heated rocks and mystic music. 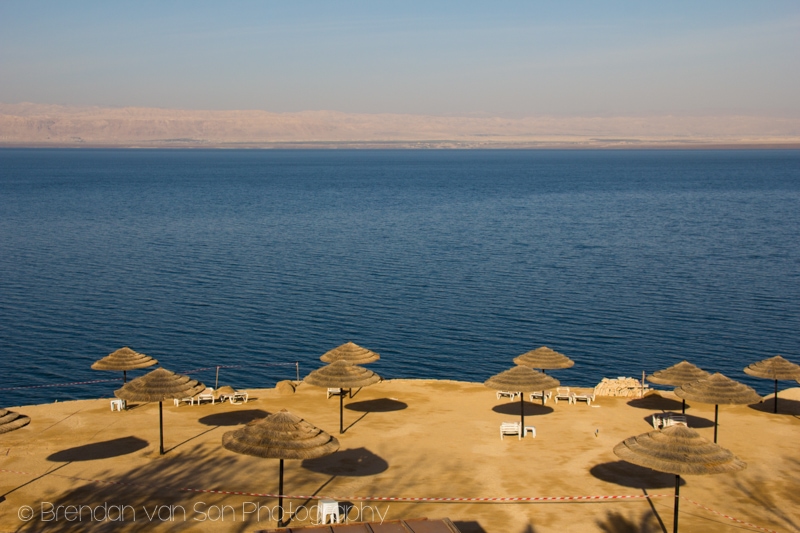 By the time it was over, my body was still covered in oil.  My skin felt soft, and my muscles weak.  My mind was dulled and everything just felt like it was hanging off my bones.  I was relaxed; walking slower, and speaking softer.  I can see how people can become addicted to the sensation of a massage.  It really does seem to wash away stress and allows you a moment of complete removal from the outside world.  Does that mean I’ll be signing up for future massages? Absolutely not.  I’d rather be stressed and save for more camera gear!