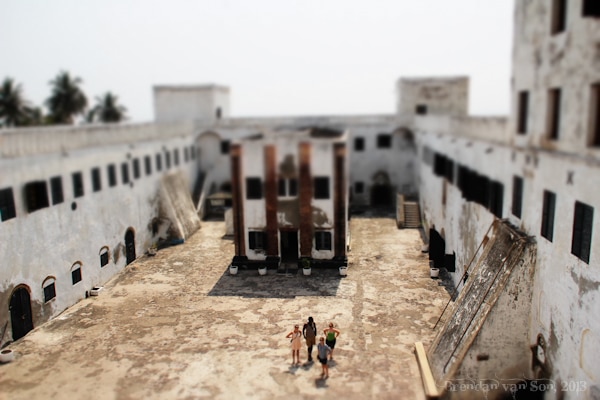 The building in the middle of Elmina Castle is a church.
Travel Photography Blog

I found myself stood in the museum of one of the world’s most infamous slave castles reading signs describing the pain, misery and sheer toll of death and wasted human life that the trans-Atlantic slave trade caused.  But then words from a neatly lettered signboard were what jumped out at me:

“Despite the pain the slave trade caused, it also brought good to Africa such as new food sources, new tools and most importantly the Christian religion.”

I had noticed the prevalence of religion through my tours around various castles in Ghana.  One guide stated very proudly that the majority of slaves were sold by Muslim-practicing African leaders and that most Christians wouldn’t sell their own people out to slavery the way the Muslims did.

I shuttered at the idea that this has turned into war of religion, that somehow the death of hundreds of thousands of people has been justified by religion, at least in part.

Between both Elmina Castle, the oldest operating castle in West Africa, and Cape Coast Castle, perhaps the most famous, tens of thousands of men women and children were taken from their home and over multiple centuries were sold into slavery or killed.

In each of the castles churches stand.  In Cape Coast Castle, the church sits directly over the male dungeons and parishioners could look down at those captive.

Religion was used to justify the rape of women slaves captive in the castles.  It was decided by the church in the castles owned by Portuguese, Dutch, English and even Swedish rulers, that sex was a human necessity.  Governors had special balconies where they would stand and observe female slaves stuffed into the dungeons below.  They would select the women they wanted to lay with from the groups of suffering.  If women didn’t comply, they would be strapped to a cannonball by their ankles.

As we stood on the floor in Cape Coast Castle, which is made up of a 3 inch-thick feces, urine and blood composite, the guide talked about modern-era slavery.  How slavery has taken a new form. He talked about how Africa is still taken advantage of by whites, how Africans continue to sell their values for white dollars, and how many Africans refuse to stand up for themselves rather than asking for handouts while tying themselves to proverbial hitching posts.  And while I agreed with the guide in part, the final statement of the tour broke my heart.

“Through all the terrible things that slavery brought,” he said attempting to put a positive spin to the end of a depressing tour. “The age of slavery was worth it for this continent because it brought with it the glory of the lord and saviour; the power of Christianity.”

“Do you believe that?” I questioned although I really regretted it as I stood in front of a group of people all quietly staring around in awe.

“Of course,” he continued without hesitation. “There is nothing more powerful and rewarding than Christianity and the love of our God.  The deaths of these people was not in vain.  It was justified by the delivery of our God.”

I can’t help but voice my opinionated thoughts and quickly note: “I’m sorry if I disagree with you, but if you truly believe that the deaths of tens of thousands of innocent people can be justified by religion, then perhaps slavery has in fact taken a new form.”

A terrible feeling washed over me as I began to wonder if perhaps people need to enslave themselves to something.

Perhaps human-kind isn’t as strong as I always imagined.  So often we set aside our moral values under the cloak of money, power, religion, or all three.  Maybe we need something higher to answer to because our feet stand on such soft self-conscious ground,  Maybe we’d allow the world to crumble upon itself as long as we have a moral way out.

To me, there are few things more sad than what happened through the process of slavery.  There is nothing that can justify it.  As terrible as it might be, the deaths of those who died in the process was in vain, and any attempt we make to justify it is simply to appease our own moral pain.

Now, these castles serve their modern purpose.  They serve as a reminder of the pain that human-kind is capable of.  But they can only teach their lesson if we don’t allow ourselves to find justification. The only way that we can ensure that these lives did not go to waste is by telling the story and ensuring that this never happens again.