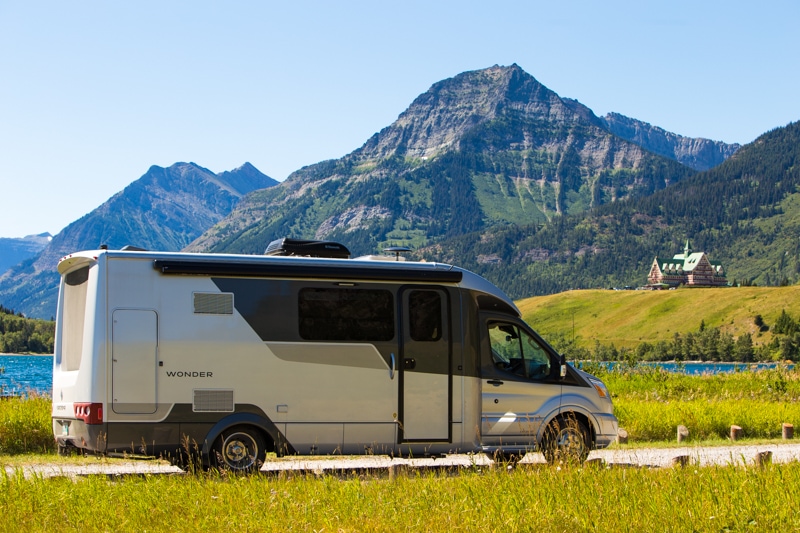 Driving an RV Across Canada

In my last post, I talked about how I was focusing on my vlog and as a result I’d be doing weekly round-up blog posts.  It turns out, though, that I’m quite terrible at keeping up on the weekly blogs too.  I think, to be honest, the more I let things slide, the more things get away from me. So, I’m sorry about the delay getting this article about driving an RV across Canada up.  I swear I’m going to try to be better at keeping you up to speed from now on.

I was working on a project dubbed: #bringbackwildhood with GoRVing Canada.  The idea of this project was to try to recapture the excitement of a classic summer vacation camping trip – but, done with style.  I took part in the project alongside Erin from The World Wanderer (check out her post on the trip here).

Though we were suggested that we should take an RV on a bit of a local adventure in the Toronto area, we thought something a bit more epic was in order. It was there than an epic plan to drive an RV all the way across Canada was born. But, we hit a roadblock because it was actually August long weekend when we wanted to do the trip. There weren’t any RVs available.

Thankfully, the amazing people at Leisure Vans came through.  They personally drove an RV out from Manitoba to us for our trip.  In fact, they gave us their 2017 model called “The Wonder” which was amazing.  It really became home on wheels.

Crossing the Shield and Avoiding Murderers

After departing from Toronto, and spending a night in Parry Sound, Ontario, we made the push across the Great Canadian Shield.  I’ve done this section before on the Via Rail train, but have never driven it. I was impressed by how beautiful it all was. It was far more hilly, and the roads far more enjoyable to drive than I expected.

One thing I loved about having the RV was the lack of stress around where to spend the night.  For example, when crossing Ontario, we got into our destination extremely late, and just pulled into a parking area of a campsite and crashed for the night – all with the comfort of a bathroom and a luxury home.  Of course, I might have been the only one not feeling stressed about sleeping out in the forest.  Erin, from just outside the hard streets of NYC, was oddly worried about murderers. Check out her hilarious discussion in the vlog below.

If there was one part of the country I was a little bit worried about driving the RV through, it was the prairies. Don’t get me wrong, I actually like the prairies a lot.  I think they are strangely beautiful, and I love the open skies and wild weather you get there.  But, driving in a straight line for a couple days is definitely not easy.

It also wasn’t exactly easy because this summer has been incredibly wet meaning that the mosquitoes were out in full-force, wreaking havoc on our windshield – and skin any time we stopped.  In fact, at one point around dusk crossing into Manitoba there were so many mosquitoes outside that we thought it was raining.

That night, after finding nearly every campsite booked up, we decided to pull our RV into a truck stop to crash for the night in another location that would make Erin slightly (although perhaps more rightly) nervous.

I was really excited to cross the border into Alberta.  It’s my home province, and not only do I have family around, and am familiar with the turf, but my province is pretty damn stunning.  I have an aunt and uncle that live near the town of Milk River in the very south of the province, so we decided to head that way for the night.  On the way, we made a stop at Writing-on-Stone Provincial Park.

I took Erin on a hike through the desert-ish landscape, something that would push her a bit out of her comfort zone, and make her a little bit uncomfortable (yes, you’re seeing a theme here, but the girl’s a trooper, I assure you).

After talking big, and promising to protect Erin from rattlesnakes, I nearly stepped on one during our hike.  Worse yet, I didn’t even see it; Erin did.  I’m sure any bit of trust she had in me was completely gone at that point in the day.

At night, we camped at my Uncle’s house, and slept under some of the most stunning stars. I’m told, thoughI slept right through it, that there was also a coyote hanging out next to our camper all night.  In continuing the theme, Erin asked me at night what would happen if I was bit by that rattlesnake, or if something happened to us out in the middle of nowhere.  The hilarious discussion, again, can be found in the vlog below.

Bears, and the End of the Road

We loved the Wonder that Leisure Vans let us use so much that we decided to steal it another day.  Since it was the holiday Monday, we assumed that no one would even notice if we didn’t return the RV.  I’m pretty sure we got away with it.

In spending our extra day with the RV, we decided to hit up one of my favourite, and most under-rated parks, in Canada – Waterton Lakes National Park.  I wanted to take Erin there because she has been itching to see wildlife.  Waterton, in particular, is known for their bear activity.  So, I took a bit of a wildlife drive along one of the parkways towards Red Rock Canyon. It’s a road I’ve had a lot of luck spotting bears on over the years.  And, basically as soon as we turned onto the parkway I spotted a little baby black bear poking its head out of the guardrail.  After popping out, he was followed by another baby bear and mama bear. It was an awesome sight.

Before the day was out, we would have seen another bear, although we couldn’t stop for it.

Big Thanks to GoRVing Canada

Before I end this round up, I want to toss a huge thank you to GoRVing Canada. They were absolutely awesome in putting this all together. If you don’t really want to own an RV, but love the idea of having one for a couple of weeks a year, they can hook you up with awesome RV rentals all over Canada.  Personally, I can’t imagine a better way to drive across Canada than in the RV like we did.  It was such a brilliant adventure, full of the freedom to explore.  We made so many amazing memories, and for that I’m so thankful to GoRVing Canada, Leisure Vans, and of course my travel buddy, Erin.