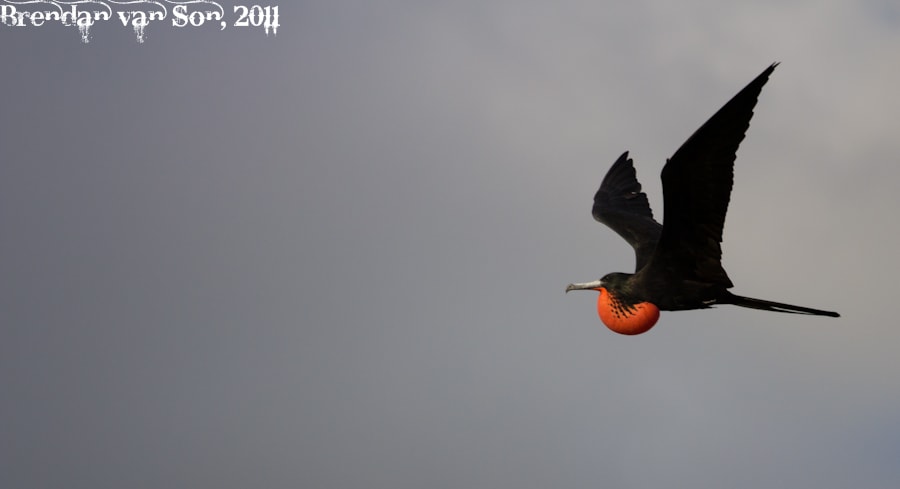 On my trip to Jamaica we were taken on a bit of booze cruise around Montego Bay near sunset.  Included in the trip was some snorkeling, music, and a lot of rum.  On our way home we made our way through some mangroves just off the coast.  There we were encountered by a huge flock of birds.  The majority of the birds were frigate birds.  The frigates are one of the more gracefully flying sea birds, they seem to hover above the ocean like a  kite in the wind.  At times, usually when they are not flying, their necks open up this bright red (or white depending on their sex) pouch.  I had always wanted to catch a frigate bird in flight with its pouch open, and was lucky enough to get not only this photo but a number of cool images.

Photographing birds in flight can be tricky, especially if the light is a little bit low.  Getting a sharp image of a flying bird comes down to getting a lot of this right technically.  First of all you’re going to want to make sure that you have a quick enough shutter speed to catch the bird sharply; generally this means a shutter speed of about 1/250 at the least.  If you’re lower than that you’ll want to increase the ISO a touch.  The second thing you’ll need to do is to use the focus setting on your camera that allows the focus to follow a moving object, this is make sure your focus keeps moving with the bird.  The third thing is to pan while shooting; follow the bird at the same speed it is moving and shoot using the continuous shot when it is in a nice range.  If you shoot with continuous shot one is bound to come up sharp.  Artistically, do your best to allow the animal some breathing room in your photo.  Giving some space for the bird to fly into adds dimension to your image.