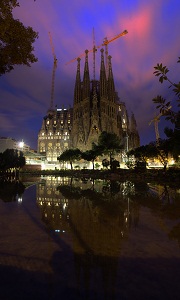 Whenever you tell someone you’re going to Barcelona, or that you’ve been, the first thing that usually jets out of their mouths is “oh, I love Gaudi!”

In my opinion, what makes Gaudi so special is the same thing that makes Picasso special, his work is so unique that you can see an unfamiliar piece of art and say “that is Gaudi”. There may be more intricately designed churches and buildings in Europe and there may be other wonderfully pieced together works of architecture, but none resemble “a Gaudi”.  If you haven’t seen any of Gaudi’s work in person, get a plane ticket and book yourself any hotel Barcelona has to offer and you’re sure to be pleased with this must-see, one of a kind destination.

I think too that it may have a lot to do with the fact that people get a bit of a rise out of being able to look at something and say “that is a…”. The same way that people can’t help but jump out and tell you they’ve been somewhere when they see it on television, a poster, or a friend’s photos. People find an attachment in things that they’ve experienced, and once you’ve experienced Gaudi’s Flintstone-like work you’ll always be attached to it. You’ll never see another Gaudi piece and not be able to pridefully tell people around you that it’s a “Gaudi”.

Sill, for all it’s worth, I’m sure there has to be more than the association theory to the love of Gaudi’s work. There is no denying that the unique extra-terrestrial qualities of Gaudi’s architecture are beautiful. But part of it must also be linked to the fact that you could visit a hundred different churches in Europe and not see but a few with more than a couple major differences. In a continent packed with Roman Catholic churches, in Barcelona, you get Gaudi.

At the end of a trip around Europe, you might catch yourself looking at photos wondering which destination a certain photo is from. However, with Barcelona, when there is a Gaudi building involved, you’ll have no doubt as to which destination you’re looking at.

Thanks to Gaudi, there is no other destination in Europe with more iconic architecture.