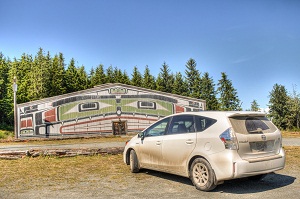 Getting Cultured in Alert Bay

“Why Africa?” people ask me constantly in regards to my choice of next travel destination. “What makes it special?”

“There are over 100 languages in Senegal alone,” I like to tell people to blow their mind a little bit.

But interestingly enough, the farther I seem to venture from home, the more I remember that there is an often forgotten culture right next door.  There are cultures laden with incredible stories and powerful traditions on my home soil.  And although we tend to group Native Canadians under one heading, the truth is that in British Columbia alone there were likely more than 100 different First Nations language groups before first contact with Europeans.

A mask for sale in U’Mista Cultural Center

As we stepped into the U’Mista Cultural Center in Alert Bay, just off of Port McNeill on Vancouver Island, and sat to watch a video about the traditions of the local First Nation people I was struck by my shortsightedness.  I have literally travelled around the world to seek out interesting cultures and beautifully preserved traditions when they exist right here at home.

Moreover, the coastal First Nations people have some of the most beautiful cultural practices and artifacts in the world.  The native songs and dances offer a powerful insight into the relationship between themselves and their natural environment.  Their masks are easily the most intricate that I have seen anywhere in the world.  And their totem poles are some of the most distinctive pieces of art found anywhere on the planet.  It is a shame that we as a society have somehow managed to, somewhat, sweep these traditional practices under the rug.  That being said, it seems as though there is a resurgence in the cultural practices, here in Alert Bay anyways, and perhaps the growth and interest of tourist has a lot to do with that.

Totem poles on the burial grounds in Alert Bay

However sad it may be that someone like myself, a travel writer who seeks out tradition, history, and culture, can forget about such a powerful system so close to home, it is also natural.  Just as we will often travel around the globe to see a beautiful lake, waterfall or beach while never visiting the places we have at home, there is a draw to the exotic.   It almost seems to be human nature to seek out the most difficult means of exploration, as if we are forcing ourselves to push the limits of the earth to strike a chord of understanding about the world we live in.

The Big house in Alert Bay

But the truth is, I think, that the farther we venture from home the more we realize how much we neglect what it has to offer.  I might be the worst spokesperson in the world for this, but I constantly scream out that one doesn’t need to go on a massive trip around the world to explore it.  There are plenty of things we haven’t seen around our hometowns, there are certainly cultures we don’t understand right at home, and there are numerous ways you can explore the world you live in just by walking through your back yard.

Thus, I want to challenge you to explore a little bit more.  Stop making excuses that your budget doesn’t allow you to go on a trip, get out and explore your hometown as if you were a visitor.  More often than not you’ll find out that there’s a world that exists there you wish you had discovered sooner.

Remember, the world is your jungle gym and you choose what you do with it.