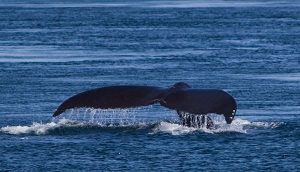 As someone who has always enjoyed watching wildlife in its natural environment, and photographing it, whales have always kept my interest. A big part of it is the fact that we simply just can’t observe these great animals in their natural environment the same way that we do animals that share our realm.  We don’t get the chance to see them wander around the world the same way we can a lion, elephant or bear. In whale observations, we only get a quick moment when we see them pop above the water. What they do below the surface is a mystery to those of us who don’t devote our life to their observations, and there is still a whole lot of unknowns to those who do devote their lives to understanding whale activity.

Gotta love the scenery AND the whale fluke

Obviously, I relish any opportunity I get to jump on the water and see these creatures for the few moments that they spend at the surface. I got this chance again in Telegraph Cove, British Columbia as I headed out onto the waters with Stubbs Island Whale Watching in the search of whales and other sea mammals. The trip was very rewarding.

You’ll spot other wildlife too. We spotted whales, seals and a bunch of birds including this many bald eagles like this one.

I’d be lying if I said that part of my love for whale watching, and wildlife photography in general, doesn’t stem from the sense of “the hunt”. Although I am not a hunter, nor do I believe in hunting “for sport”, I can relate to the sense of excitement. I am a competitor, and any chance I get to compete in any fashion is exciting for me. I love the excitement of having mere seconds to spot, frame, and capture a photo of a whale above the water, and I am not the only one.

This is probably the closest shot to the whale I got. We didn’t see the whales do any dramatic jumping as they spent most of their time feeding. From what I learned on this trip and in Antarctica, whales are most active later on their arrival somewhere once their bellies are full. At that time they are less concerned with eating and can have a little bit more fun.

Perhaps the most entertaining aspect of the whale watching was experiencing the human element. Each time a gust of water was sent into the air, there was a call of excitement. Soon after, as the back of the whale would show there would sound a collective “ohhhhh” among the viewers, soon followed by hundreds of shutters firing as if we were at a machinegun range. And as the fluke of the whale disappears into the water, the gallery scatters into a chorus of laughter and chatter.

The back of a humpback. Called a humpback because of the bump they have on their small fin.

Our whale watching experience was obviously a success. Although we weren’t lucky enough to spot Orca’s (apparently they hadn’t been in the area yet for the year), we did have the chance to witness a playful humpback whale. To top it all off we had great weather and some absolutely stunning scenery. I’ve said it time and time again, no matter how much I travel the world, Vancouver Island always blows me away and will forever stay listed among my favourite places in the entire world.

Two friends I made on the whale watching trip.

If you ever get up to Telegraph Cove, be sure to check out Stubbs Island Whale Watching, they’ll take care of you. This is one of the premier spots in the world for whale watching. According to the guides, the peak season for spotting both transient and resident killer whales is July and August (in case you’re already planning a trip).

Have you ever gone whale watching? If so, what did you see?