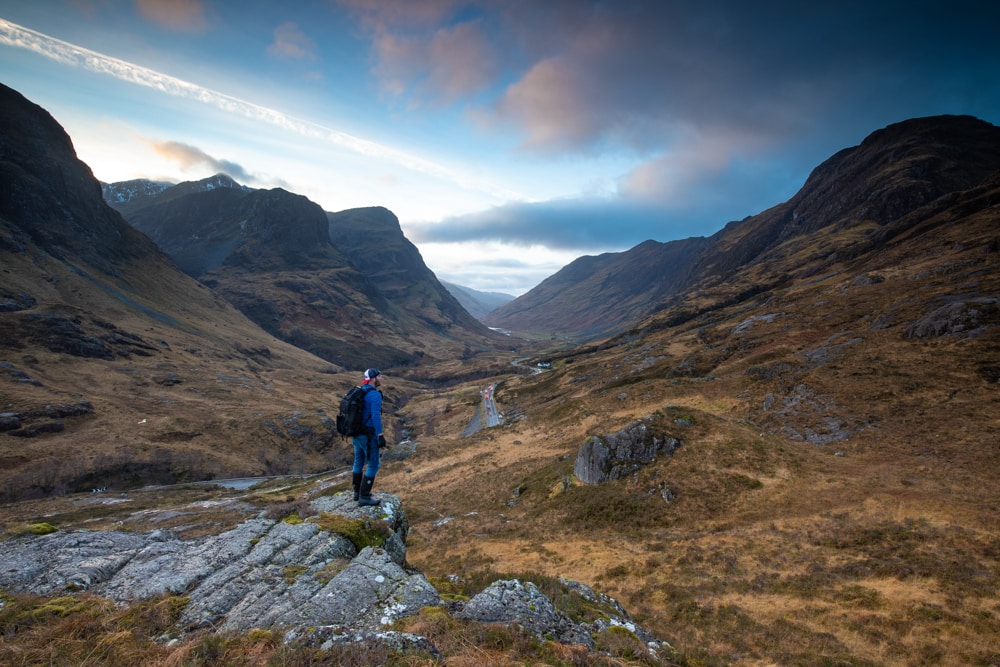 Glencoe – A Paradise for Photographers in Scotland

I continued my campaign in Scotland with Visit Britain by heading to Glencoe.  Now, I’ve been to Glencoe a couple times before. But, each time I went I was pretty rushed to photograph things. And, I wasn’t helped by the weather which was extremely Scottish.  Still, despite bad weather and rushed schedules, both of my prior trips led to beautiful images because it is simply beautiful.

Thankfully, on this recent photo trip to Scotland I had a little more time – and the weather gods cooperated.

I’ve photographed from Ralston’s Cairn before.  Earlier in the year, while up in Glencoe on assignment, I hiked up here in the morning.  Despite getting hammered by winds and rain, I did walk away with a decent image.  However, I really wanted to catch some light on an image from this incredible view point.

So, wen I drove into Glen Coe and saw the light hitting the sides of the valleys I raced up to the view point for an image down the glen. 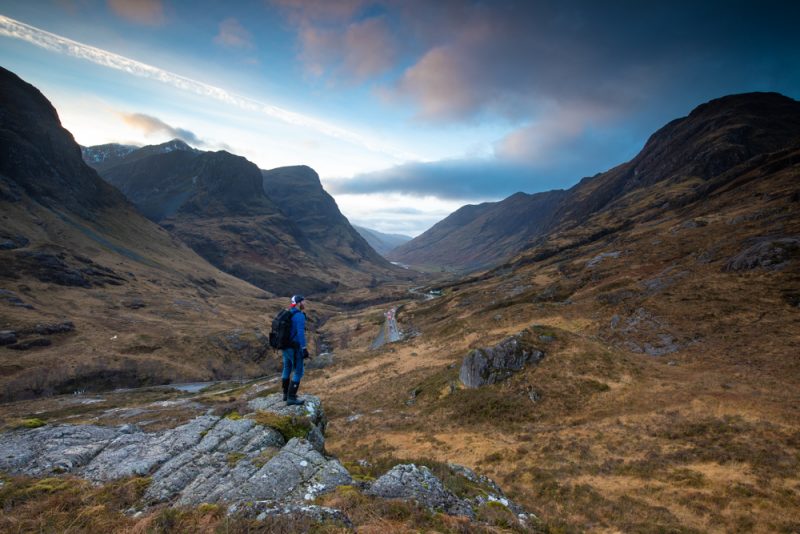 I was leaving Ralston’s Cairn after the sun went down and wanted to head to another photo location known as the meeting of the waters.  I wasn’t going to take pictures, but I did want to have a quick scout around to look for a photo to make on another day.

At the meeting of the waters I ran into a YouTuber named Adam.  He wanted to show me a location that wasn’t far that he thought I’d like.  He was right.  It was a simple shot down the river looking into the glen with the treee on the water.  I managed to frame it up in a way I liked on the 24-70mm lens.

This is how it came out. 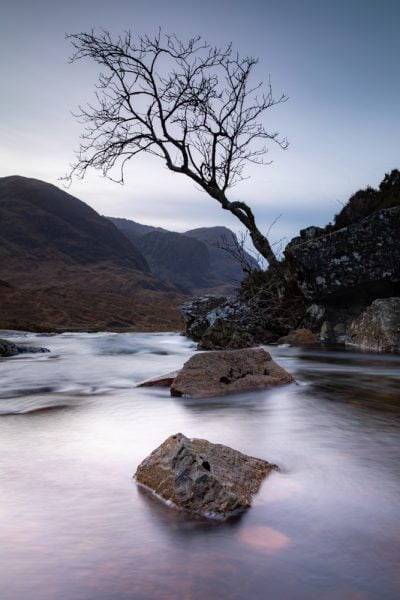 Ok, I know that Kilchurn Castle isn’t in Glencoe.  But, it is within driving distance.  It’s such a stunning location that it would be a shame for anyone to miss it.  So it was on my shot list.  In fact, I thought I might get lucky and be able to capture the northern lights above it.

I drove out in the night to the castle.  However, the actual weather super-seeded the forecast.  It was meant to be clear, but the cloud was so heavy it just wasn’t going to happen.

That morning, I made the drive out to Kilchurn Castle again.

In the dark, I had seen a tree that I thought would be a perfect frame for a photograph of the castle.  So, that was my first photo of the morning.

Then, I sort of got hammered by wind and rain.  It really wasn’t looking good. 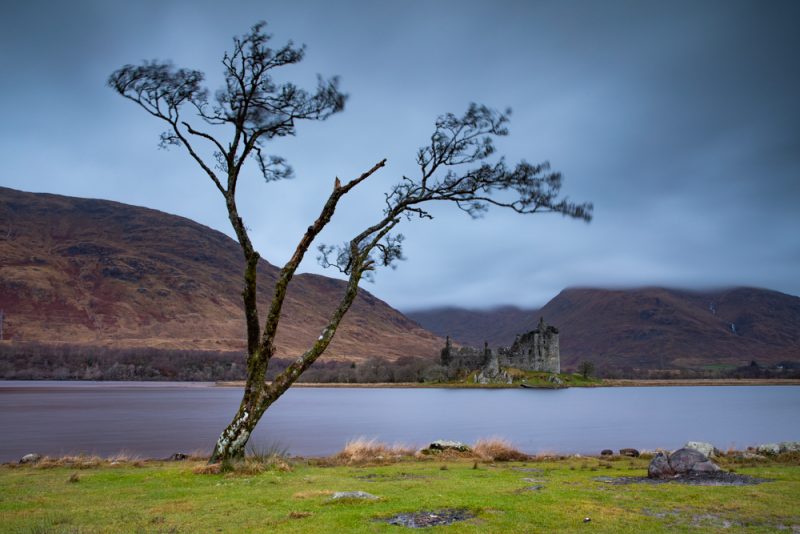 But, the thing about photography in Scotland is that the weather can change quickly. And just as I was about to give up the sun punched through and lit up the scene beautifully.

It happened so quickly that I almost panicked and didn’t find a composition before it disappeared.  In the end, I’m quite pleased with the image I got. 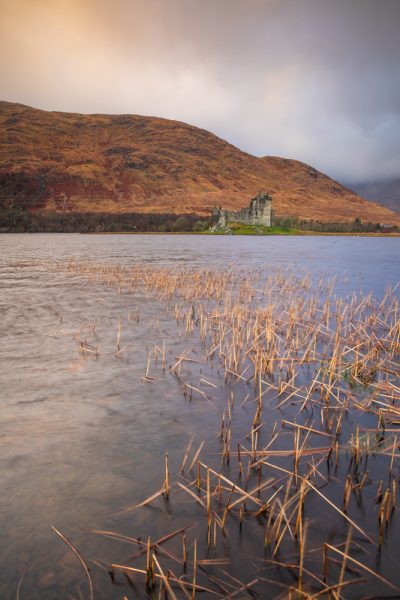 This might be the most popular photography location in Scotland right now.  Photographers from all over the world are flocking here to capture the beautiful waterfall that poses so perfectly in front of the pyramid-mountain in the background.

As a travel photographer, you’re kind of required to photograph the iconic places.  So, quite quickly I headed to the front of the waterfall and took a photo. 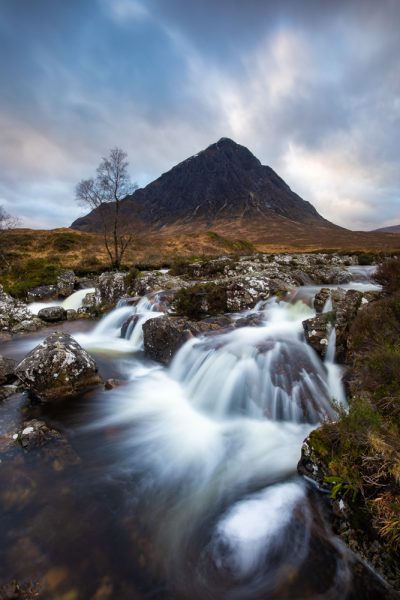 After getting the iconic location out of the way, I trudged up river looking for something a little bit more unique.

I think that in travel photography it’s important to find recognizable locations and places and then finding ways to capture them from different angles.  You don’t want them to look like totally different places, but you do want to find new places to photograph the classics.

Up river made sense.  But, I did struggle a bit to find a frame.  I ended up getting my tripod down into the most random place and capturing a small rapid in the river.  And, luckily, the light really punched on the clouds giving a nice colour to them. 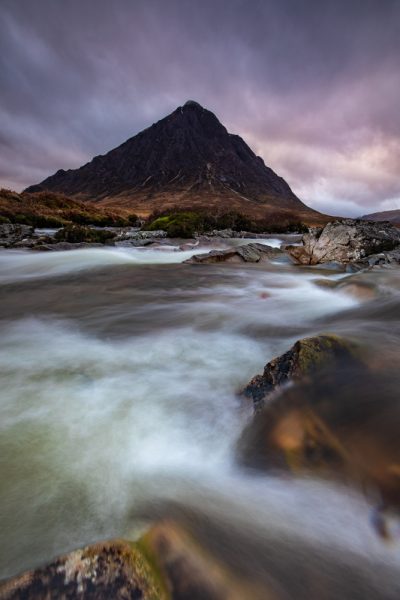 I do have one more post coming from this trip to Scotland.  But, if you’re looking for more photo blogs from Scotland be sure to see the first installment from this trip.

Over the next couple months, I’m going to also work on putting together a big blog post with all my favourite photography locations in Scotland as well.  So keep an eye out for that.

In real time, we’ve just finished our photography tour in Iceland and heading to The Philippines.  There will be plenty of content coming from both of those location.