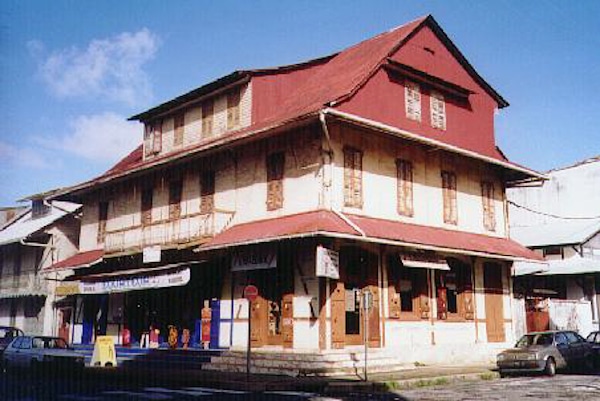 How to Travel French Guiana on a Budget

French Guiana is the most expensive country I have ever traveled. The high costs are even more exaggerated by the fact that it is a small country with a fairly poor infrastructure system. There are no real bus companies that operate along the main highway, there is a public transport system in Cayenne that only passes by about once every two hours and has very limited routes, and there are no backpacker’s hostels. I almost decided to skip visiting French Guiana due to the high prices, until a backpacker I met on the way said something that spurred the competitor in me: “you simply can’t travel French Guiana on a backpacker’s budget.”

It was at this point that I turned my gaze towards the sky and gave my best impression of Barney from “How I Met your Mother” and said “challenge accepted!”

When all was said and done I spent 8 days in French Guiana and spent a grand total of 200 dollars. Yes, you read that right. I only spent an average of 25 dollars a day, which is not only below the average backpacker’s budget, it is well below my usual budget of 35-40 dollars a day. These are the tips for traveling French Guiana on a low budget I accumulated in my stay.

In North America, hitchhiking is a thought that terrifies most people. There are countless numbers of stories of people being kidnapped or assaulted in trying to pick up hitchhikers. Also, people are scared to pick up hitchhikers because of, well, the same reasons. In French Guiana hitchhiking is the norm. If you have a tight budget it is impossible to be taking public transport constantly. For example, the price of a shared taxi from the border of Brazil to Cayenne is about 40-45 Euros, and from Cayenne to the border of Suriname it is another 50 Euros. That alone would mean that backpackers would be looking at about 150US$ just to get across the country. In both of my hitchhiking efforts I was picked up very quickly and the drivers were very friendly and more than happy to help someone out. The section from the Brazilian border to Cayenne is supposed to be much more difficult to hitchhike, but if you wait it out you’ll find a ride.  Give it a shot, it’s not as dangerous as you think.  It’s not like you’re hitchhiking in Iraq like Roni Weiss!

There really is no way around the expensive price of hotels in French Guiana, and in particular Cayenne.  In my research the cheapest accommodation I found was a hotel for 4O Euros well outside of the downtown.  Luckily for me that place was booked up so I decided to dig a little bit deeper.  After thinking about renting a car to sleep in and get me around the country, I finally came to the realization that this was the time I would give couch surfing a shot.  It was a great financial decision besides the price of accommodation.  I saved on food costs eating group meals, and besides, I met some great people doing it.  I only couch surfed in Cayenne, but I estimate that I saved about 250US$ by doing so.

The capital of Cayenne is worth a day or two of exploration, but the truth is that Cayenne doesn’t truly represent the country, and it is downright expensive.  There are a couple of places outside of the capital that are much cheaper to stay at and will also give you a great feel for the country.

I’m not sure I’ve ever seen a place where transportation is such an issue as French Guiana.  Cayenne has a poorly operating transit system which makes it very difficult to get anywhere.  Simply getting from the outskirts of Cayenne to the center of town is an absolute nightmare, and a taxi can cost you upwards of 25 Euros for the 10 minute trip.  If you are planning on traveling around and seeing places like Kourou and Devil’s Island, and you are traveling in a group of 2 or 3 it would be well worth it to rent a car.  Most rental car agencies charge about 30 Euros a day.  Split amongst a small group that is a small price to pay for your happiness.

Eating out in French Guiana could be a lot of fun if you weren’t worried about your wallet losing its weight.  However, if you’re running a tight budget, like I was, it can be a nightmare.  A meal at a decent French restaurant will likely cost you between 15-40 Euros.  Even a simple breakfast at one of the cafes in the center will cost you about 10-15 Euros.  Most of the time I avoided eatig out thanks to my couch surfing, however, when I went out I went for Chinese food.  Just outside of the center there are a number of Chinese restaurants where you can get a very nice feed for about 7 Euros.

Basically anywhere outside of Cayenne is hammock country.  Many of the hotels have areas that allow people to throw up their hammocks for about 6 Euros a night which sure beats the price of a room at about 50 Euros.  If you are arriving from Brazil head toon of the local markets and pick up a nice hammock for the 10-15 dollars it costs, it will save you a fortune in rooms all over the Guianas.

The truth about budgets is that you can always make something work no matter where you are or what other people say.  However, sometimes you have to make some compromises, usually in your comfort.  Personally, I don’t think it is worth it to go out of your way to save money in travel just for the heck of it.  Often in budgeting your travels you have to give up on seeing certain things you would have liked to see, and usually that means you aren’t getting the most out of your travels.  That being said, forcing yourself to stick to a low budget teaches you things like self-control, patience and respecting the value of money; and in the end it is these learning experiences in travel that make the experience so powerful.