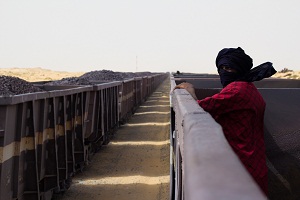 How to Ride the Iron Ore Train in Mauritania

Riding the Iron Ore train from Nouadhibou to Choum, Mauritania was one of the top travel experiences I have ever had.  The journey from the coast into the heart of the Mauritanian Sahara is as much of an adventure as one could possible have, and will certainly leave you full of stories to tell.  However,  I am not going to go into details about the journey since it was already featured in the latest issue of Vagabundo Magazine.  But, I will let you know a little bit about what to expect and what to bring with you on the trip as well as share some photos from the Mauritanian iron ore train, which I have been told may actually be the longest train in the world at over 2km long.

What you need to Bring