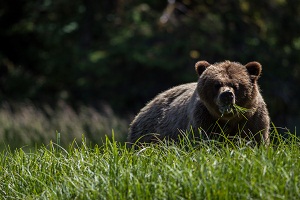 Want to be 20 feet away from a grizzly bear??? Head to Khutzeymateen.

On another incredible day of this epic #ExploreBC campaign (check out the facebook page here), we set out in a float plane from Prince Rupert to visit the Khutzeymateen Grizzly Bear Sanctuary.  Despite the name, this is not a zoo nor is it a wildlife park.  Khutzeymateen is essentially a massive protected zone along an inlet North of Prince Rupert.  What makes the park so special is that the concentration of grizzly bears is so high that you are basically guaranteed a couple sightings.  According to the guide, in the summer months bout 98% of tours see at least one grizzly, and there are certain tours, like the one I was on, that see quite a few more (we saw 5 grizzlies).

The other thing that makes Khutzeymateen so special is that you can get so close to the bears without really disturbing them or putting yourself in any danger.  The bears feed on the nutrient rich vegetation on the banks of the inlet in the spring, and when the salmon are running up stream in full force they also can be watched fishing along some of the streams of the inlet.   Since you are actually viewing the bears from a boat, you can creep right up on the bears.  And since the bears are so busy feeding, they hardly notice you’re there.  In one case, we got ourselves within just 20 feet away from a thousand-pound grizzly.

When you get yourself on epic travel experiences like this #ExploreBC trip has been, it’s easy to realize that your bucket list had been missing some things.  A visit to the Khutzeymateen grizzly bear sanctuary isn’t just something that you should check out, it is serious bucket list stuff.  In terms of overall travel experiences, my visit to Khutzeymateen was among the best days I’ve had travelling, period.  It was up there with nearly any day on my trip to Antarctica or the Galapagos.

There is something so humbling about being so close to such a powerful animal.  There are no words to explain the feeling of looking up and seeing a thousand-pound grizzly bear looking back at you from just a couple meters away.  I know that it can’t be explained in words, but hopefully my photos can convey the feeling a little bit.

That hump on the grizzly’s back is pure muscle. Luckily for us, they usually use it for digging. This is perhaps my favourite photo from Khutzeymateen. It might also be the cover of the next issue of Vagabundo Magazine… we will see. This is the closest we got. I shot this with only a 200mm lens. It’s too bad the light was really harsh that day, because obviously shadows are an issue in this photo. These were actually the first bears we saw on the trip. It was a mother grizzly and 2 cubs. The mother was obviously a little nervous around us and they took off into the woods when we got about 200 meters away. We saw more than bears too. We spotted a couple bald eagles as well as some seals. But for good reason, the people come here for the bears!