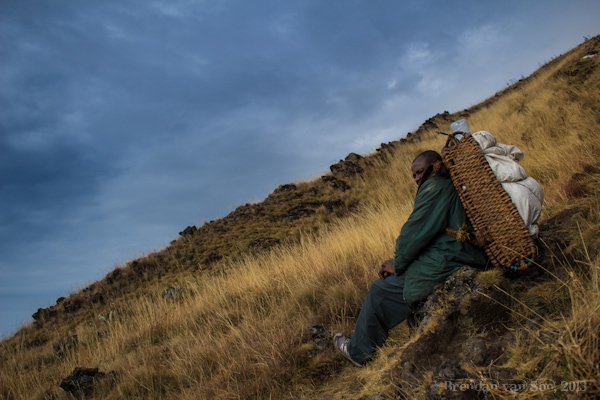 Mount Cameroon is a Big Bastard

I can hear the alarm clock on my desk across the room singing its creepy song.  I must have accidentally chosen the ghost alarm tone. It’s fitting.  I roll my bruised body out of bed landing on one knee at the edge.  I press both hands to the bedside, shove myself to my feet and saunter across the room.

I toss on a pair of cargo shorts and walk out to my balcony for a look at the mountain on which the town of Buea is sat.  The mountain fades from bright green to yellow to a shade of pure desolation.  Mount Cameroon is a big bastard.  It is nearly 4,100m, an active volcano, easily the highest in Cameroon and the highest mountain in all of West Africa.

Upon returning to my room, I pop a cocktail of drugs meant to reduce the chance of infection.  I crashed my scooter yesterday and I can hardly bend my body at my waist as a result of variety cuts and bruises strewn across my skin.  A swollen bubble has developed on my back the size of a child’s football.  I toss my camera bag on my shoulders and step up and down my desk’s chair a couple times to see if there is discomfort, there is. 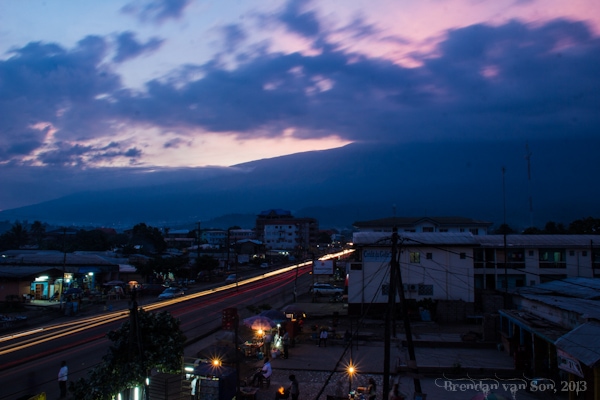 The first steps up the hill are marred with regret.  With each stride I take uphill the pressure of my bag weighs on my wounds; each step down bounces the bag into a full out direct hit into the bruise.  Within a couple hundred meters of ascent I twinge my groin, presumably attempting to protect my back.

Mount Cameroon isn’t bashful, nor does it tease at the idea that it is an easy climb.  Apparently, no one has told Cameroonians about switchbacks.  The most popular route up the mountain, called the Guinness Route, is straight up.  There are no zig-zags, no flat sections, and certainly no reprieve.

Within a couple of hours we pierce through the treeline and into the open air and wind of the mountain.  In many ways, it feels as if we’ve climbed right out of Africa.  There are no women carrying goods on their heads, no children rolling inflated bicycle tubes, no elephants or cheetahs up here, just misery. 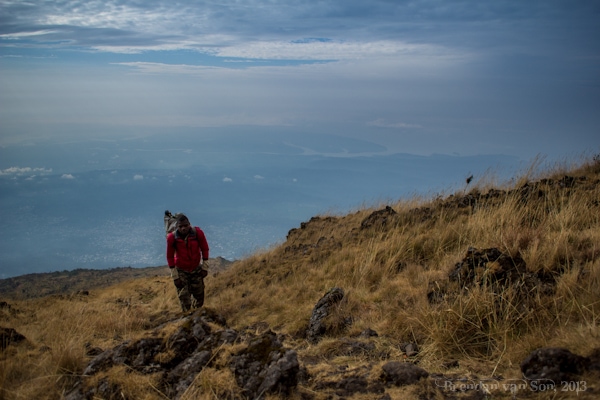 The trail continues to get steeper as I feel stupid for telling the guides a relatively flat piece through the jungle was difficult.  As we climb above 2,300 meters I feel as if I’ve been on a Stairmaster for the past 3 hours.

The porter behind me is struggling as well.  He is bent down with his left elbow rested on his knee.  As he stares at the ground, he chants in what sounds like a voodoo call.  I wonder if he’s praying, or maybe he’s cursing me; I am the reason he’s worn out on the side of an active volcano after all.  Later, I ask him what he was chanting.  He tells me he was summoning the strength from his ancestors to get him up the mountain.  Unlike the Sherpas in the Himalayas or the Quechua in the Andes, the porters here haven’t grown up in the altitude.  My porter came from a village that had a clear view of the ocean.  When we stop at the hut for the first night’s sleep on the mountain he points to his village and the ocean below. 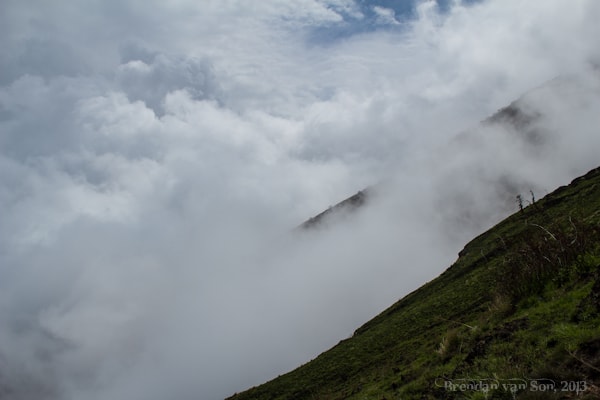 Night turns cold quickly on Mount Cameroon.  Just a couple nights before I was slept in my tent on the coast in the city of Limbe – which we can also see from our hut on the mountain – I was covered in sweat from the night’s humidity. Tonight, I don’t change out of the clothes I wore to hike and wrap myself in my -7 degree sleeping bag.  Our sleeping quarters consist of plastic walls, a tin roof, dirt floor, and wood-planks for beds.  I don’t sleep more than 10-15 minutes.  I’m unable to move thanks to the various cuts and bruises that are strewn all over my body.

I’m pulled from my bed by dawn, a cup of boiling coffee, and the realization that the mountain I could see from my room in Buea, now 2000m below us, was just the tip of the iceberg.  Mount Cameroon is actually a massive chunk of volcanic earth which is capped by a series of different peaks and craters.

The trail continues without reprieve, although the guide doesn’t seem to mind.    I’m fairly sure he’s part robot.  His steps always seem to be the exact same distance and his speed never changes.  Occasionally he wheezes like a part of his engine needs greasing.  For the most part, however, he operates the mountain without the slightest of challenge.

On the other hand, I lose my clarity somewhere around 3,500m.  My mind seems to act a couple steps behind and at times I blank out completely.  I’m not sure my body is getting enough energy for the hike as well as to repair my wounds.  I’m struggling.  I begin to play a game in hopes of forgetting about the pain I’m in.  I count my steps until I hit 20.  I stop for 10 seconds and I continue again, this time forcing myself to reach more than 20 steps before I break.  Each time, I force myself to increase my steps.  Like counting sheep allows one to forget they’re trying to fall asleep, this helps me forget I’m trying to climb a mountain.

When we reach the summit, there is no jubilation, no cheer, nor flag-raising ceremony.  I sit down on a flat-looking rock, take a couple photos from a seated position, and then start down the other side of the mountain.  We have some 36km to complete today alone.

It isn’t until we drop 1000 some meters that my head returns to a place of normalcy.  The guide walks over to me with his hand open to shake as I sit in some shrub grass eating some coconut cookies. 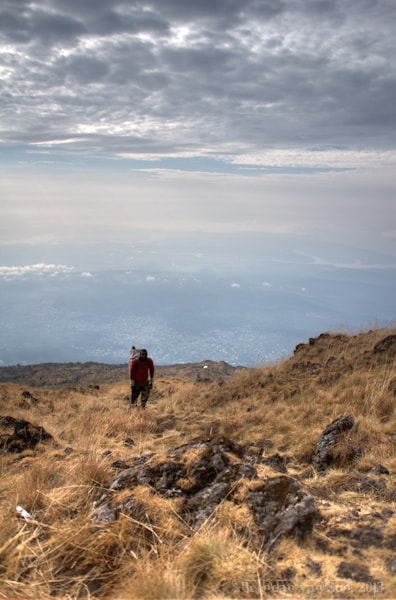 The hike from the summit of Mount Cameroon to Mann Spring is like a complete reversal.  The somewhat flat terrain dances with happy green shrubs.  Rivers of lava flow along the slopes and craters still smoke from their recent eruptions.  I become chatty, relaxed and reflective.

I often wonder what makes me do things like climb mountains.  What do I really get out of climbing a peak like Mount Cameroon?  I wonder if I have some sort of inferiority complex that forces me to do these sorts of things to gain the respect of others; maybe the fact that I’m writing an article about it is proof of that.  If these adventures were really for me, really for character building purposes, I’d keep them to myself wouldn’t I?  Maybe, people like me feel the need to climb mountains because they need to be completing goals to feel self-worth.  I think in many ways that’s why travel is so rewarding.  Nearly every day that we’re on the road we’re achieving goals.  Whether it’s trying a new food, reaching a new destination, or climbing a mountain, there are so many achievable goals involved in travel that you can’t help but feel empowered by it.

After a night under the stars, we again reach the Cameroonian jungle and after 5 hours of speed descent we reach town.  My feet burn, my back growls, and my mind dances somewhere between exhaustion and pure shut down.

I pull my chair out to the balcony of my hotel room and watch the sun set to the side of Mount Cameroon.  I’m not sure if what I’m feeling now is achievement or pride.  However, I know that nothing was going to stop me from leaving this town without climbing the mountain.  I’m not wired let mountains beat me.

I stand up and lean my bruised forearms on the balcony and the mountain seems to smile at me.

“Ok you big bastard,” I think while raising a proverbial glass to the great volcano. “You’re not just a mountain.”