Situated in the middle of the world’s largest salt flats lays one of this planet’s most unique, if not resourceful hotels. Bolivia’s “Hotel de Sal” sits alone atop a vast plain of milk coloured and perfectly level salt which is more reminiscent of an oversized skating rink than a piece of land at 3600 meters above sea level in Southern Bolivia. While nearing the salt hotel the sun reflects powerfully into the eyes of trespassers, seemingly providing a deterrent, begging people to turn back from its desolate and isolated environment. Its blinding locale seems to be one of the worst suited to a 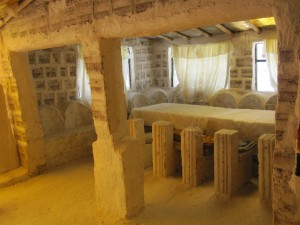 hotel, yet each year thousands of people flock to this obscure hideaway for a chance to stay in a hotel made entirely of salt.

The idea of the hotel itself seems better suited to the likes of an elaborate James Bond movie scene than something one might find in one of the most desolate locations in Bolivia. To be quite honest, the hotel itself is far from extravagant. It houses no more than 10 tiny rooms that will often leave guests testing to see if they can touch their left hand to one wall and their right to the other. There is only one public washroom and, no, the toilet itself isn’t made of salt; it is one of the few structural pieces that isn’t sodium based. The walls are steadied by thick bricks of heat-treated salt crystals which are adhered together by a bleach white form of salt cement. A vast array of jagged salt constructed furniture completes the design of this lonely and awkward building.

Despite its inventive nature, it is not the structure or even the design, but the incredible setting of the Salt Hotel, which draws visitors each hoping to spend the night. At over 10,000 square 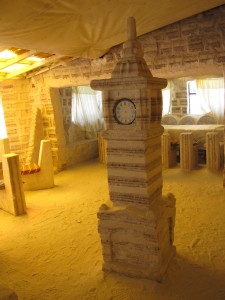 kilometres the Bolivian Salt Flats, Salar de Uyuni, are the world’s largest salt flats. The surface of this strangely exotic piece of the earth’s surface is so flat and vast that as visitor’s eyes stretch across the horizon they can actually see the natural curvature of the earth, one of the few land based places on the planet where this phenomenon can be clearly observed. As the hoards of tourist jeeps zip across the flats their passengers are easily mesmerized by the monotony of white exhibited by the vehicle’s sharp white floor. The scenery is extraterrestrial. The crystal white salt flats are lined by dusty grey hills covered with 800 year old T-shaped cacti. The presence of ancient coral and limestone rock formations prove the primitive existence of a large inland sea on the Salar, but the enormity of such a drastic transformation seems to immense to The salt flats are a photographer’s dream. And one doesn’t need to have an educational background in photography or a Nikon telescopic camera lens to capture the ambience of the region. Travelers scatter themselves all over the flattest whitest areas of the salt flats trying to capture some of the more interesting perspective pictures. Some of the most entertaining photos include people being attacked by giant toy dinosaurs or stepping on a “Honey I shrunk the kids” version of their friends. The salt flats are one of those very rare places on earth where you just can’t take a bad picture. Perfectly constructed hexagon shaped cracks form on the ice-like salt and stretch out until the eye’s view flips its sight from white to clean blue sky. The sheer enormity, however, of the area could leave even the most gifted photographer in too much of a sense of awe to pull the trigger.

Although the “Hotel de Sal” is the original, and best located salt hotel, many other local businesses are starting to take up shop along the edges of this mythical setting. The newly constructed hotels may be better constructed or even more comfortable, but something has to be said for originality and authenticity. The salt hotel easily out does the competition in terms of charm, despite its primitive makeup. Its allure lies in the sharp salt tables and the rickety salt block statues; and its mars-like location is impossible to match. All these reasons are sure to maintain the salt hotel as one of the highlights of Bolivian travel for decades to come.