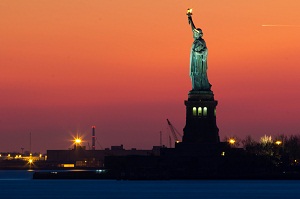 Photo of the Statue of Liberty

When I made my second trip to New York City this past month I had all the grand intentions to shoot photography until I broke.  I was going to be up pre-dawn and shooting photos until well after dark.  Well, it didn’t happen.  As usual, a string of amazing events in my life was followed by a string of bad luck.  I flew from Santo Domingo to New York only to arrive to find out that during my flight my website, and my magazine’s website, had been hacked by malware.  If that wasn’t bad enough my computer was chewed up in the process too, and spent 4 days with the Geek Squad.  I ended up spending the better part of my time in the city, and all of my funds, trying to get everything sorted, but thankfully I did.

However, I told myself I was not going to leave New York City until I got a proper photo of the Statue of Liberty.  I had just acquired some new toys (part of the series of good things), including a 200mm f/2.8 lens and a 2x extender.  I was keen to test out the equipment and I thought that a photo of the statue of liberty from across the river would put the new gear to the test.  I was right.

Anyways, enough chatter, this is one of my favourite photos of late not only because of the amazing sky, but because of the practice of new skills and new equipment to get it.

So with out further ado, here is my photo of the statue of Liberty:

As I eluded to in the preview, I got this photo of the Statue of Liberty using my new 200mm f/2.8 lens and a 2x extender. I shot the image from South Cove Park which might look like one of the worst places in the city to shoot since it looks out to New Jersey, however, I also got a great line at the Statue of Liberty. Placing a 2x extender, for those who don’t know, on a 200mm f/2.8 lens essentially turns it into a 400mm f/5.6 lens and gives a whole lot of range. I wouldn’t have been able to get this shot without it.

As for advice, I’d tell you that sometimes in photography you have to think outside the box. Most people wouldn’t imagine taking a photo of the Statue of Liberty from where I was, but it works. Also, sometimes challenge yourself to shoot photos with strange equipment choices to expand your creativity. Try to shoot landscapes with a telephoto lens, try to photograph wildlife with a wide angle lens, etc. Doing these things can only help your creative process and help you see what works and what doesn’t 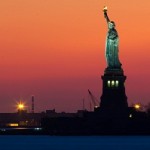