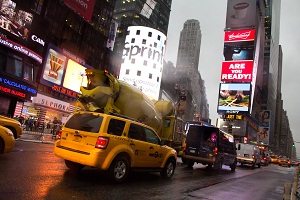 Over the past six months I’ve spent two separate weeks in New York City, the first time I was there was actually my first time ever in the city.  I can’t tell how many times prior to visiting New York people would say things to me like “you’ve never been to New York City???” Or, “You’ve been so many places, how is it that you’ve never been to New York????”  The truth is that most of my travels have had to concentrate on cheaper destinations.  Moreover, destinations like New York that are so close to home that they never really seemed too exotic or intriguing too many.  After the visits to New York, however, I wonder what took me so long get there.

New York is so full of photos waiting to be taken, and there is something worth photographing at all hours of the day and night.  On my second visit to the city I had all these big plans about how I was going to go out shooting photos all hours of the day and night, but my plans were foiled by a myriad of technical problems.  That being said, if I would have gotten all the photos I wanted, I’d have no reason to go back.  And you know what? I kind of love New York.

Here are my photos of New York City.

The Brooklyn Bridge may be the most photogenic place in all of the United States.  On top of the fact that the bridge is an absolutely beautiful piece of architecture, from the other side of the bridge you are rewarded with some stunning views of the city.  During my visit to New York part of the bridge was under construction so I didn’t get all the shots I had hoped for.  That, however, didn’t stop me from taking about 300 photos in a single evening.

I love Central Park. I love how in the middle of one of the biggest, busiest cities in the world there is a place that one can get away from the noise and crowds.  For me, a walk through Central Park early in the morning clears my mind and gives me a nice bit of necessary grounding.  It’s so nice to be able to get away and smell fresh air, listen to the birds play, and watch squirrels race around in the middle of the city.  The North Woods in particular is one of my favourite places in the whole city.

It’s hard not to get carried away with emotion while wandering through Times Square.  Any time of day there are people from all over the world taking photos or simply looking around in awe.  There are few places in America that are so inspiring and exciting.  Times Square may be the most photographed place in the city.  For most photographers that makes it a place they don’t want to shoot.  For me, it gives me the challenge of creating an image unlike all the others.

There are surely more famous sites than I photographed in my time in New York City, and there are certainly enough to spend a good part of your life visiting. However, what struck me about New York City is that a simple wander around the city will put you face to face with them. Without knowing it, you can turn a corner and me stood right in front of the Empire State Building. You may be walking along the street only to notice Ellis Island and The Statue of Liberty across the street. It’s that concentration of great attractions which makes New York such a great place to visit.

No city would be complete without the people.  New Yorkers tend to get a hard time from the rest of the world for being rough around the edges, but I love them.  They speak their minds, they are colourful, and they come from all over the world.  I’m not sure there is a more diverse set of people in the world than in New York City.  Sitting in the train or a cafe will likely lead your ear to hearing a number of different tongues and accents.  It’s a beautiful thing.

I’m now in Europe, and for the next little while the content of Brendan’s Adventures will head that direction as well. For those who are wondering about the Haiti article I promised, it will be up in the next couple of weeks, I’m just waiting on the organization to get a couple things set up.

Stay tuned as the adventures continue!