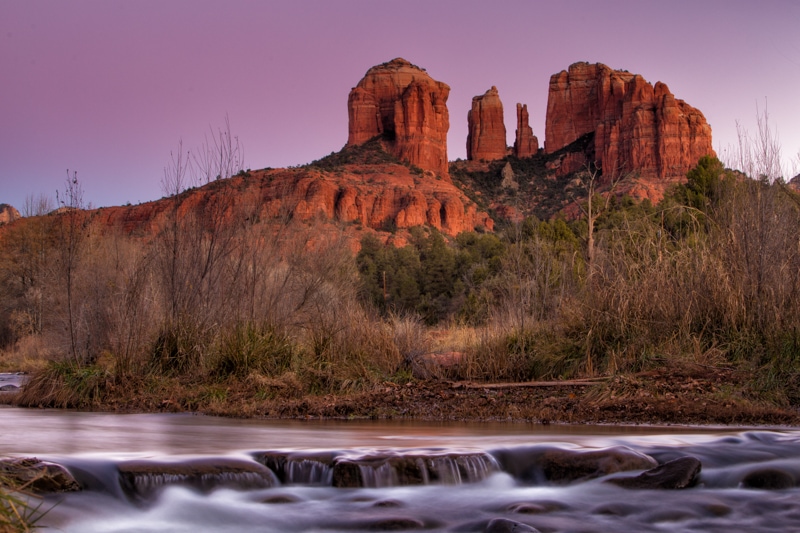 I visited Sedona, Arizona at the very start of 2012 and shot a spot called Red Rock Crossing.  However, when I got home, I realized that I mis-shot the image in a number of ways.  Nothing serious like shooting the wrong ISO or the images weren’t sharp, but just things that I wish I had done differently to make the image more powerful and the scene more dramatic.  I noticed two major issues with my image from Red Rock Crossing back in 2012.  For one, the red rocks of Sedona, which are so dramatic to the eye well on location, looked small in my image.  Moreover, I didn’t have a fluid exposure.  In all my images either the sky was overexposed of the foreground was too dark.  But, the beauty of travelling to places for a second time is the ability for redemption and to improve on your previous work.

Check out the video to see how I rectified the mistakes I made in the past and then read up about how I got the shot this year at Red Rock Crossing in Sedona this year below.

I stumbled across Red Rock Crossing last year when I was in Sedona simply because my GPS said there was an attraction nearby and I went there on a whim.  I was glad I did.  In my opinion, it’s the best place in Sedona for photography despite it being a fairly small park.  Not only do you get nice and close to the red rocks from this location, but you’ve also got a clean background behind them.  Of course, you’ve also got that nice clean foreground of the river and the crossing to shoot as well.  Even if you’re not into photography, this is a great place.  There’s some nice hiking and biking in the area as well.

Red Rock Crossing closes at dusk, but you can stay and shoot for a while after as the outgoing lane of traffic is always open.  Also, it should be noted that this is not the same park as Red Rock State Park, although that park is also great but better for hiking than it is for photography.

How I Fixed my Photography Mistakes

As I mentioned in the intro, there were two major issues I had with the photos I took the last time I was at Red Rock Crossing.  The first error was that the mountain in the background, which I believe is called Cathedral Mountain, just looked tiny.  That’s an issue people often have shooting wide angle lenses.  When you shoot too wide, it makes everything look smaller.  Shooting a super-wide angle can be a bit of a trap in photography.  Yes, you get it all in the frame, but it makes the scene looks smaller than it is.  So, how do you rectify that?  Well, one way is by using a telephoto lens.  I shot the image featured in this article with a 70-200mm lens at 70mm.  The image from last year was shot at a 28.8mm equivalent (18mm on a crop sensor camera).

The other issue I had with the photo from the year before was the exposure.  I had an over-exposed sky and a dark-ish foreground.  This was an easy fix.  I used a gradient ND filter to bring out the sky.  I also had the benefit of a slightly softer light this year because of a cloud blocking part of the sunset at my back.

Post-processing was extremely minimal on this particular image.  The only thing I did was bring out the vibrance and the shadows.  I did use a gradient filter in post-processing to reduce the highlights in the sky and increase them in the foreground, too.  Finally, I did a tiny amount of clean up in the top right corner to get rid of a bit of a distracting tree branch.  In general, pretty minor stuff, though.

More Images from the Shoot at Red Rock Crossing

Of course, this year at Red Rock Crossing I was a little bit more focused on one particular shot that I was last time I visited Sedona.  Thus, there’s not as many locations or angles as there were in my last article.  However, I have a couple more angles to share.  Check them out.

It’s been a bit of a tradition on this travel photography blog to do a New Year’s Resolutions post.  However, in the past the resolutions were more all-encompassing in my travel life.  This year, I’m going to do some more resolution, but I’m going to focus them on photography alone.  That’s what’s coming next.  After that, I’ve got a video about my shoot out at Horseshoe Bend near Page, Arizona and plenty of other fun stuff as my road trip is kicking off here in the Southern US!