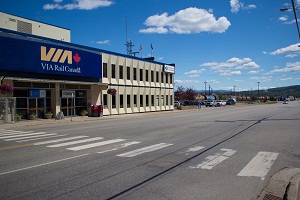 In the decade known awkwardly as “The 2000s”, North America saw a vast exodus of population towards the suburbs of cities.  In search of large backyards, “safer” neighbourhoods, and bigger houses, people vacated the core of cities across the continent.  However, in doing so they also seem to have vacated the heart of the community.  Sure, the suburbs of the city are safe; but they also very often drag us away from the essence of what makes a city special and unique.  That being said, if “The 2000s” were the decade of the exodus, then the also awkwardly named “Tens” seems to be the decade of urban revival.  The city of Prince George, British Columbia is a prime example.

The Via Rail Station in Prince George

As far as curb appeal goes, Prince George doesn’t exactly inspire.  The downtown core can seem quiet, if not empty at times. Four lane streets see only a trickle of traffic apart from midday, and the grey exterior of the buildings seems to almost blend in with the very streets they line.  However, one only has to dive into a place like Wasabi Sushi or Nancy O’s to see that the revival is well underway.  As soon as you step inside places like these there is a sense that something new and hip is underway in Prince George.

The vibe in the brewpubs and restaurants of downtown Prince George is nothing like what you would expect by judging the cover.  While the streets seem drab and almost desperate, interiors scream hip, new age, and slick.  Entering into one of the establishments takes visitors far from what they would expect from a small city in the interior of British Columbia.  Rather they have a bit of a Glasgow or Brooklyn feel to them; almost gothic meets modern and sleek.

Sushi, Graffiti, and beer. That’s all a downtown really needs.

However, there is still obviously a lot of work to do in revitalizing the core.  Slick looking restaurants, live music, and pints in hip brewpubs can really only be so much of a draw when competing with the natural elements that the outlying areas of Prince George have to offer.  The city lures people from all over the world for its world class fishing, hiking and golf courses.  Drawing people away from the natural playground that breathes just outside of town and into the concrete jungle of downtown is a feat not easily accomplished.

Still, it seems the city is well on its way to creating a downtown environment that can perhaps draw people from their hidings in their suburban dwellings.  The process of revitalizing main street in urban British Columbia isn’t something that can happen overnight, but with the right collaboration of retailers, government and community organizations, it is something that can be extremely beneficial.  In so many ways, the core of the city is its beating heart; and if you can encourage your heart to beat with vigor it can only inspire all other elements of the city come to life as well.

I visited British Columbia on a part of the #ExploreBC project.  For more from this beautiful province be sure to check out the TourismBC facebook page: http://www.facebook.com/hellobc