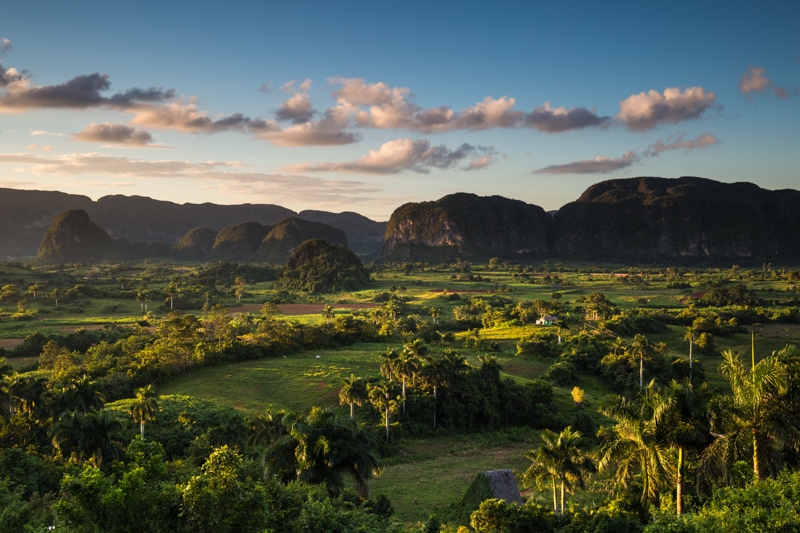 The one landscape image I really liked from the shoot up at the hotel.
Travel Photography Blog

The Beautiful Faces and Landascapes of Viñales, Cuba

My second day with Intrepid Travel in Cuba meant that I was off to Viñales. This town is set in some of the most picturesque landscapes in the whole country. The mountains are limestone-karst style and reminded me a bit of what you see in northern Vietnam and southern China.

We had a total of three nights in Viñales which was fantastic. It gave us plenty of time to get around and explore with the tour leading us, and enough time to explore on our own as well. The first day, we basically arrived and had a bit of a visit to a tobacco farm where we saw the production from start to finish. The second day, we visited some caves, and then spent some time on a farm (actually the family home of our driver, Paco), and then the final day we were completely free to explore.

The afternoon we arrived in town, we headed straight out to a nearby Tobacco farm.  Out on the farm, everything is done the same way I’m sure it was done 60 years ago. There are no tractors plowing the fields, for example.  Instead, an older man was leading a couple bulls through the field.

After seeing the farm itself, our guide showed us the drying process of tobacco, and then a lady was kind enough to show us how to roll a cigar.  She told us that she smoked between 3-5 cigars a day.  Though in western culture, cigar smoking might be seen as a male-dominate activity, in Cuba woman seem to smoke the cigars just as much as men do.  This woman was extremely elegant looking as she smoked, and made for some great portraits.

On our way back to town from the farm, the sun set over the tobacco fields and made for some cool photos.

One of the really cool things about being on a small group tour in Cuba with Intrepid Travel is that they connected us with locals much easier than you could do on your own.  One of our days in Viñales, we went to a local farm which was actually the family property of our driver, Paco.  There, some of the group helped out on different tasks such as picking yucca, or tobacco.  Others wandered around and explored the completely self-sufficient farm.  According to Paco, everything the family eats is grown right on the farm.  It’s impressive.

Here on the farm, I got some cool photos of the family life, and the landscapes surrounding it.

The day we had free in Viñales, it was actually pretty cloudy and slightly rainy weather. And well some people went hiking, and others souvenir shopping, I took the afternoon to wander around town shooting portraits.  Now, generally, shooting portraits is a bit of a mission.  But in Viñales it was so easy.  Everyone is so approachable, and not a single person turned down my request for a photo.  Moreover, most of the people I asked to photograph didn’t just oblige but offered me coffee, juice, or to see their houses.  They were so friendly.  I think of all the portraits I shot in Cuba, most of my favourites came from here.

The Landscapes of Viñales

It’s easy to pigeon-hold Cuba as a location to go to see classic cars, colonial architecture, beaches, and cigar-smoking people.  However, the landscapes of Cuba in general are highly underrated.  For me, Viñales has some of the most interesting landscapes in the country.  And well it was a beauty to see, it was a bit of a challenge to photograph.  I ended up spending an evening at Las Jazmines Hotel shooting from the best vantage point of the landscape I could find.  However, although there was amazing clouds all day, they disappated as soon as the golden hour hit. I only got 1 photo of the landscape that I really liked.

The Negative of Viñales

In West Africa, they call them “Bumsters“.  I’m not sure they have a word for them yet in Viñales, but they are essentially piranha.  Everywhere you go in town, there are 20-30 year old men bumming around doing noting except hitting on every woman that walks by, and trying to “help” tourists with things like catching a taxi.  They essentially don’t work, but instead are looking for easy money.

I call them piranhas, because that’s what it must feel like to be a woman in Viñales. Everywhere we went, the woman were accosted by the men telling them any sort of lie to get them to sleep with them, buy them things, or maybe take them with them.  It was funny at first, then got to a point where it was overbearing. And, I’m happy that most of the woman that couldn’t speak Spanish because most of the men would say things that were beyond chauvinistic bordering on abusive.

Going out in Viñales was a nightmare because there was a constant swarm of piranhas around you.  It was actually really uncomfortable. They lurked everywhere you went.

Here are a couple more images from Viñales. Looking back on my trip through Cuba, my favourite images were from here.  In fact, I think that I got 4-5 photos from every other destination in Cuba that I liked.  Whereas in Viñales, I have about 20.  The town itself might not be amazing, but the surrounding landscapes, the farms, and the people make for great subjects.

I have one more episode coming from my Intrepid Travel adventure in the west of Cuba.  I visited Las Terrazas which is an Eco-project that was built in the 60s, my next article will be from there.  Then, I’m off on my own to other Cuban destinations like Camaguey, Cienfuegos, and Trinidad.