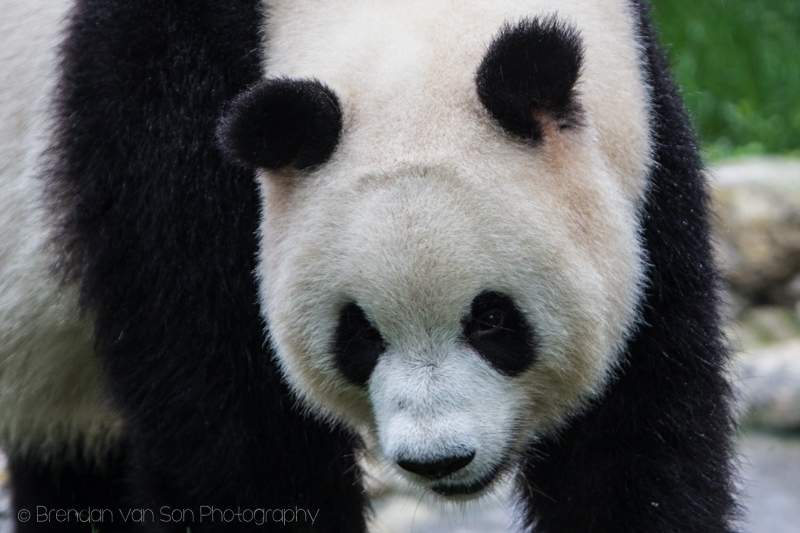 I think this is my favourite Giant Panda photo from the the center. Loved how the colour lines came out.
Travel Photography BlogTutorials

Seriously, how could you visit Sichuan Province and not go and see the pandas somewhere?  Of course, over 80% of the world’s remaining pandas live in China’s Sichuan Province.  Unfortunately, a massive percentage of the panda bears that are still living do so within some form of captivity.  Fortunately, most of those places here in and around the city of Chengdu have the pandas there for the right reasons.

I’ll likely also head out of Chengdu to see one of the other sanctuaries at some point.  But, basically, as soon as we got to Chengdu we headed over to the Giant Panda Breeding Research Center which was a good experience despite not having the greatest weather.

Anyways, I also took this opportunity to try to give some photography tips on how to take pictures in a zoo.

Information on the Chengdu Research Base of Giant Panda Research

The panda center opens visitors at 8:30am, officially.  However, there are rumors that it actually opens at 8am sharp in the summer months.  It’s probably more important to get to the center early than you think.  Crowds of people, including large tour groups of extremely loud Chinese people, start coming in around 9:30.  Believe me, all sense of peace, nature, and solitude leave as soon as these groups start coming in.  Plus, the animal feedings start at about 9am and the animals spend the majority of the rest of the time sleeping.

Not only are there Giant Pandas at the center, but also Red Pandas.  There are a variety of enclosures, all which are very good(!), and separate the juveniles from the adults.  Moreover, there are also a couple spots where the baby pandas can be seen if you’re there at the right time of year.  In total, there are 4 or 5 giant panda enclosures and 2 red panda enclosures.  Be warned, the red pandas have no problem walking down the footpaths and aren’t completely separate from the people.  Keep your distance.

Pandas give birth in the fall months, so if you’re around in October-November you might get to see some of the babies.

Entry Fee to the Panda Center in Chengdu

The cost of entry to the center is 58 Yuan for foreigners.

If you’re a student, or a child, there are discounts available.

Getting to the Panda Center in Chengdu

The panda center is actually a couple kilometers out of town, but is fairly easy to get to and there are a number of ways to arrive.

More Photos from the Panda Center