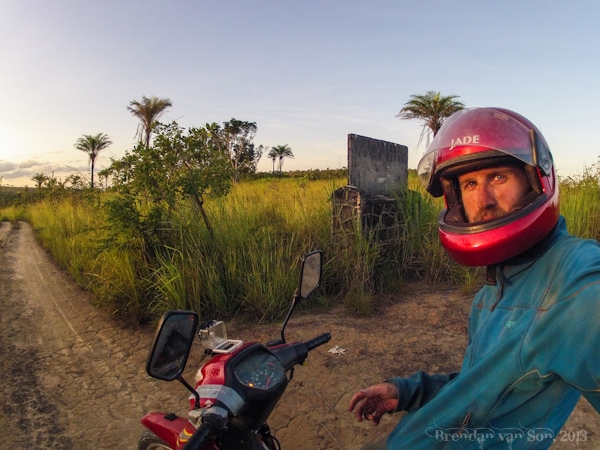 My arrival in Brazzaville was meant to be one of joy; the closing of a chapter if you will.  In many ways it is.  I arrived at the beautiful and friendly confines of the overlander paradise known as Hipocampe.  I am reunited with Jeroen and Sonja, the overlanding couple from Holland I’ve dubbed Double Dutch.  There is Chinese food, decent internet, and copious parts available for my scooter Anne Murray. 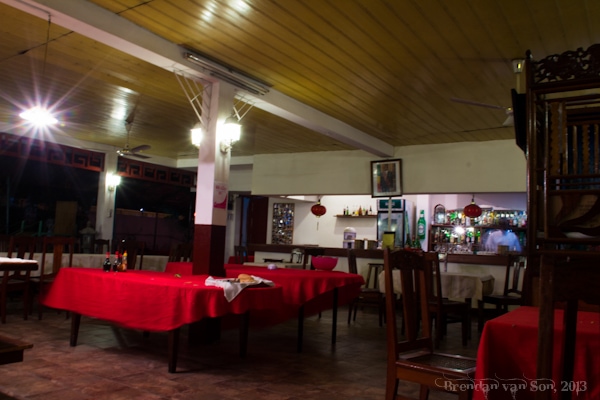 But like almost anything I’ve encountered thus far in Africa, there’s a devilish twist.

Immigration officers across the river in Kinshasa, DRC have been said to be denying all visas issued to foreigners in countries that are not their home country.  I spent $150 for mine at the DRC embassy in Yaoundé, Cameroon.  Moreover, it’s not just that they’re turning people back to the Congo.  They are stamping the visas with giant “void” labels making that visa, well, void.  Over the past couple weeks, not a single known tourist has been successful making the crossing with a foreign issued visa, even those obtained in Brazzaville.

Now, you and I understand the absurdity of this.  Embassies issue visas, the border denies them, and the cycle goes on.  Maybe it’s a money making scheme, maybe it’s a lack of communication, maybe it’s a power trip by the border officials.  All I know is that though I can see Kinshasa across the Congo River, I can’t get there even with my visa.

Double Dutch offers me the only solution that doesn’t involve spending a fortune and at least a couple weeks DHLing my passport back home to get another visa, but I’m not a fan of it.  I’ll have to drive some 450 km, many on rough roads, through a remote border post perhaps not keen to the “rules” just to get to the town across the river.

But like almost anything I’ve encountered thus far in Africa, there’s a devilish twist to the twist. 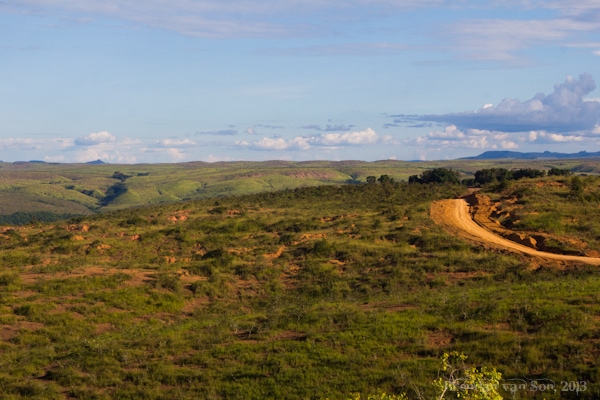 The Countryside entering the DRC

The first day goes somewhat to plan.  We cross some corrupt town officials in Boko, Congo and are robbed of a couple hours of time talking complete nonsense, but soon have some variation of a Congolese exit stamp.

As afternoon sets it things slowly turn.  The road crumbles from stable earth to slick but dry mud that seems to have bubbled like the inside of an Aero bar.  It’s slow moving and night creeps on us quickly.  At points we push through ten foot grasses or dive into 2-foot deep puddles.  We stop at a part of the road almost entirely washed out.  We can’t see the sign of life in any direction.  We have no map of the region, no working GPS, and not a clue.  For all we know we’re back in the Congo, or Angola, or Cornwall.

Entering the DRC, or as the sign says “Belgian Congo”

Hope catches hold as we spot the lights of a cell tower and run into a locked road barrage.  I honk a couple times and eventually we’re transported into a village where we’re accosted by children who do nothing but demand we give them everything from sardines to cigarettes to the shirts off our backs.  Eventually out of laziness, I curl up in the passenger seat of Double Dutch’s land cruiser. 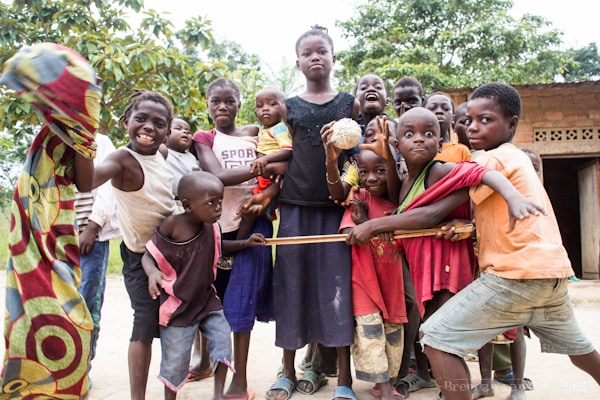 Some crazy kids in a DRC village

The twist to the already long story happens sometime between the moment I first attempt to close my eyes and the morning when I can hardly open them.  I’ve fallen ill with something.  Whatever it is, it’s sapped all my energy.  I touch my forehead, but it’s dry and cool so can’t be malaria again, right?

Barely unable to stare straight, an immigration officer stamps my passport with an entrance to the DRC and we’re off.  4 hours to a town called Louozi and hopefully some semblance of modernity.  The road doesn’t get any better from the day before and by the time we reach Louzi I’m so shattered I can’t even park my bike, I lean it on a fence.

I stumble like a drunk into the office of the Catholic mission, though everyone is at church.  I plop myself on the 80s era couch and twist a restless sleep.  My back is sore.  My fingers sometime scream in pain. I feel like puking but I can’t. I feel like shitting, but I can’t.  I feel like curling up in a ball and dying, so I try that.  A couple hours later I’m escorted to my own room where I spend the night drinking 5 liters of water and sleeping off and on.

The night moves slowly, but when it comes to a wake, I feel better.  We leave town via a ferry across the Congo and a road which is a mix of decent gravel and sunken mud and sand.  By the end of it my condition worsens, I hardly have the energy for 10 minutes of riding at a time, but I have to get to town, to a bed. 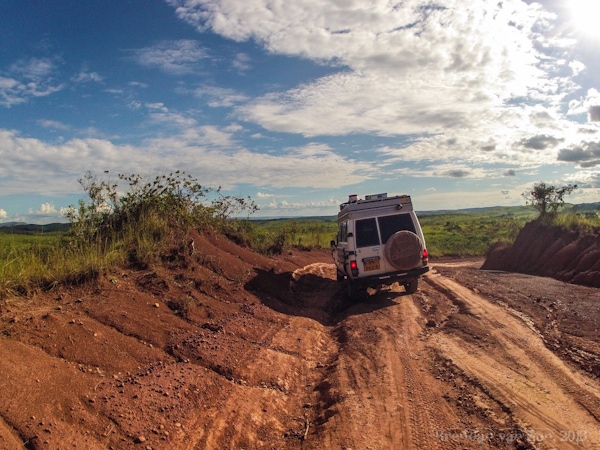 Tarmac finally appears and I say goodbye to Double Dutch who move towards Angola.  I push through heavy rains until I reach a town with a hotel.  I drop my bike in the lobby, ask the receptionist to help with my bag, skirt past a group of prostitutes, and a man passed out in a chair, and work my way to my room.  My kidney starts to twinge.  Maybe it’s kidney stones?  I pat my forehead with the back of my hand.  It’s still dry and cool.  It can’t be malaria.

The night is spent evenly between the long-drop toilet, dry heaving into the shower that smells and looks as if it has been used as a long-drop, and my bed in which I toss the sheets in discomfort.

By the time morning sets in I’m in such a state that I know I can’t wait to find medical help any longer.  It takes me 15 minutes just to put on shorts; I place one leg in and then need to lay down for a bit before having the strength to get the other one in as well.  I slip into the streets of this DRC village and walk in the direction I thought I saw a pharmacy the day before.  I can’t walk straight. I can’t really see either, everything looks fuzzy.  Locals look out at me, a grizzled, bearded and bewildered white man, from their roadside perches.  Some call out to me in Kikongo, I hear some laughing, but most stare at me in sheer terror, as if they’ve seen a ghost.  I reach the steps of the pharmacy, but the truth is I have no idea if I enter.

I black out.  I enter a world of hallucinations and oddities.

Little do I know it, but I’m within minutes of dying…