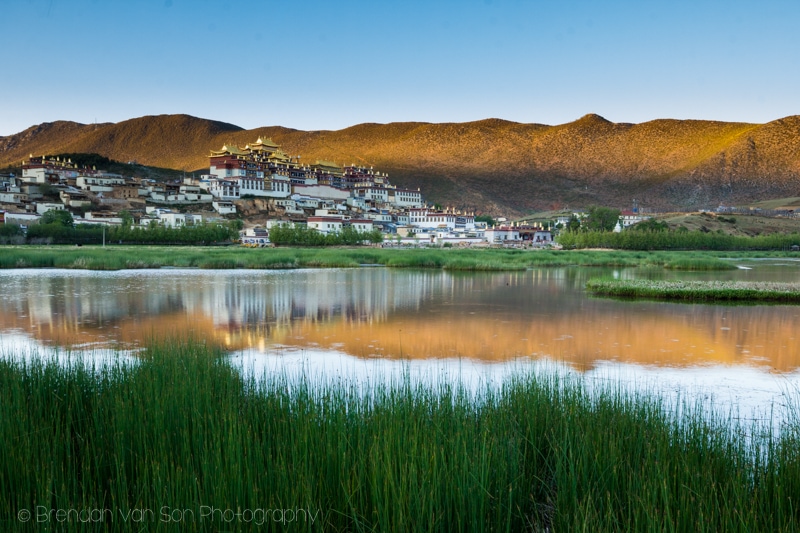 The Songzanlin Monastery and Photos of Shangri-la, China

China has a funny way of chasing our emotions around.  One minute we’re completely annoyed by crowds, spitting, tour guides using megaphones as they lead their clients around natural sight, and just noise in general.  The next, we’re blown away by the sites.  I’d say, though, I’ve been more blown away than stressed.  And when I’ve been blown away, I’ve done nothing but wonder why people spend so much time in dull Southeast Asia when they could be in China.  My visit to the Songzanlin Monastery just outside of the city of Shangri-la was one of those “why aren’t there more people here?!” moments.  It was then followed by a “I’m glad there aren’t others here” evening of shooting.  In the video below, you’ll see how I photographed the Songzanlin Monastery, which is about 5 kilometers outside of Shangri-la, China near the border of Tibet in Yunnan Province. As is obvious by the video, I was both blessed with amazing light, and punished by flat light while taking my photos of Songzanlin.  The sky was so amazing during the day.  The clouds were perfect and the afternoon light was perfectly soft.  It brought out the colours of everything so perfectly.  And as amazing as it was to shoot, the monastery as equally challenging.  The building is just so big, that it was tough to get it all into my frame. Then, as the evening light came, the clouds disappeared which made taking photos of the monastery really difficult.  In the end, I’m quite happy with the images I got from Songzanlin, and Shangri-la in general. Check out the rest of my pictures from Shangrila below. 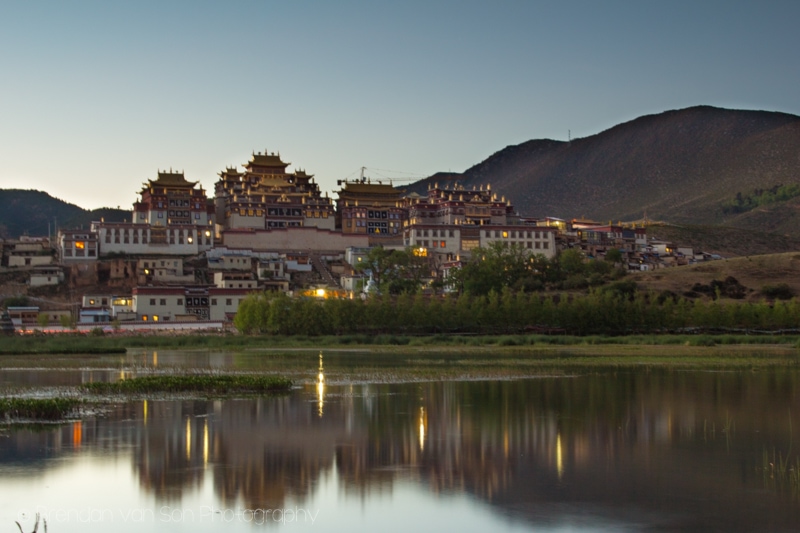 Last one of the day. In the video, I said I was going to show you how to edit this one, but it came out kind of bland. I hardly touched the image on the edit. 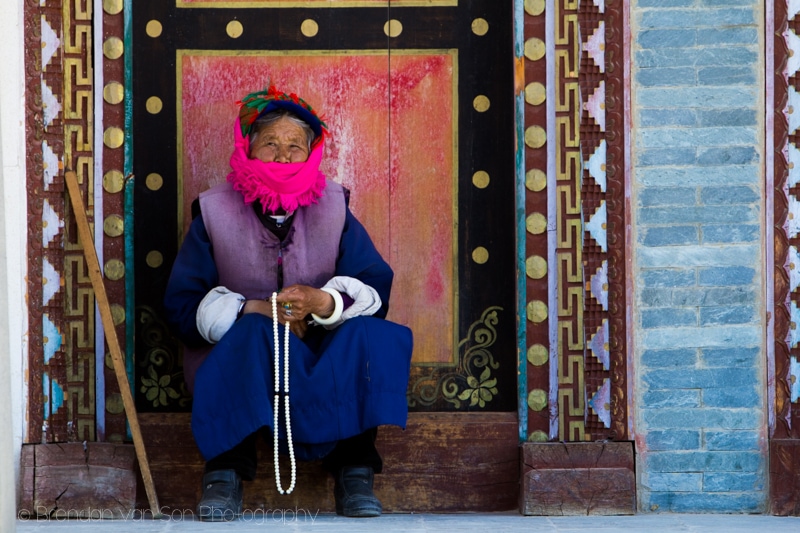 This older lady was nice enough to let me photograph her. How could I not with a scene around her like that? 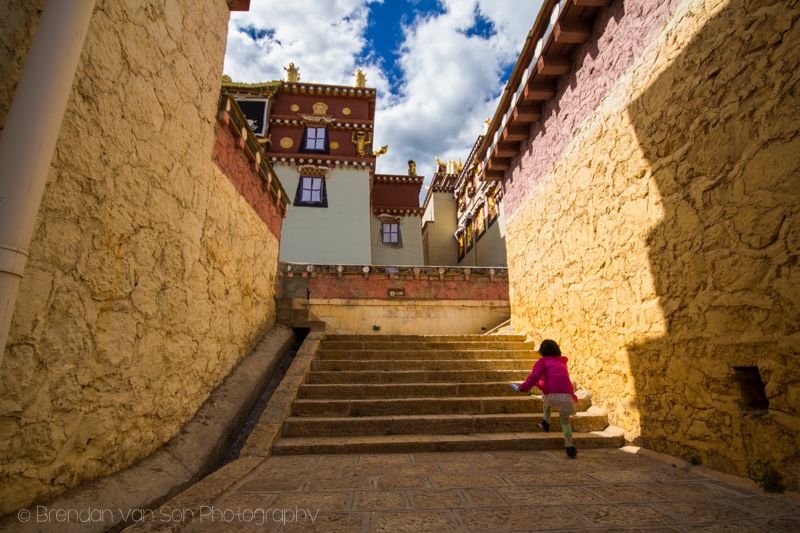 The alley way leading up to the Songzanlin Temple in Shangri-la. This girl ran into my shot, and made for the perfect subject for the image! 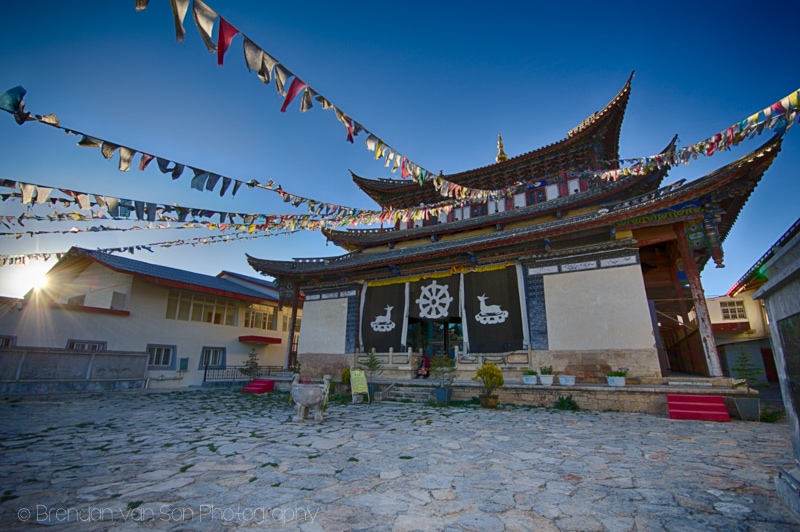 Temple downtown Shangril-la. I shot this one HDR to bring out the star in the sun and the colours. 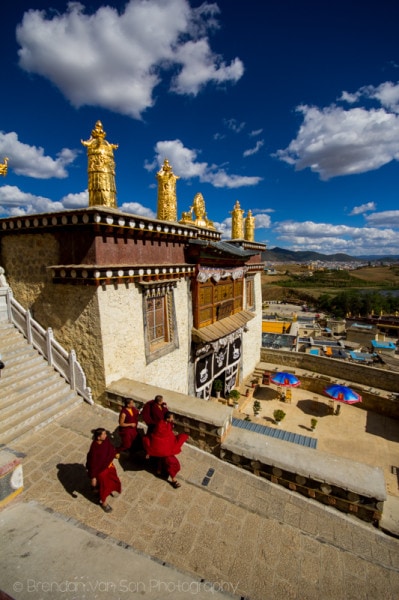 I think this is my favourite shot from the Songzanlin Monestary. A couple monks walked down the scene as I was photographing it. Made for a beautiful image. How about that sky too, right?! 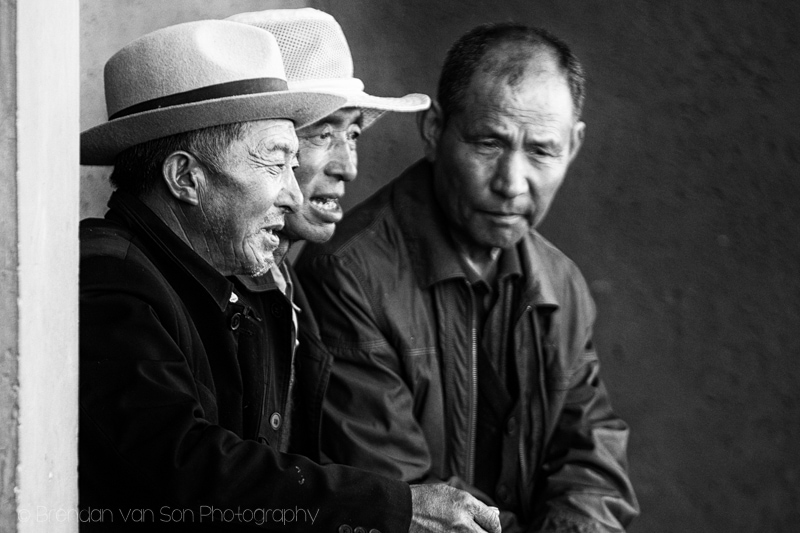 A couple old men discussing what seemed to be fairly important details. 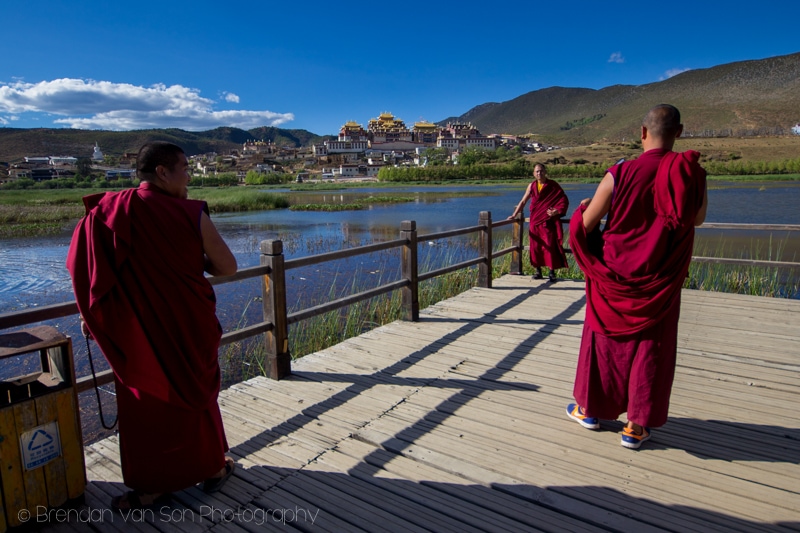 Some Buddhist monks out with their iPad getting some photos in front of the Monastery. 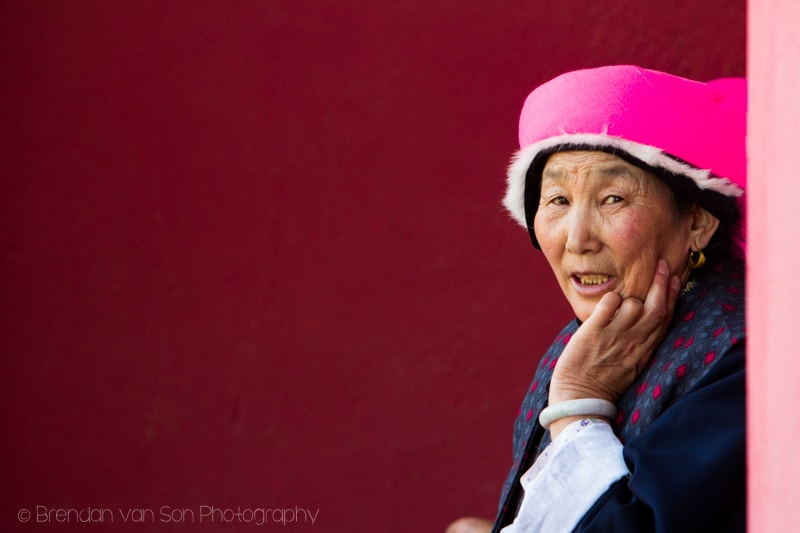 Probably my favourite portrait from the city. The colours were just too perfect. 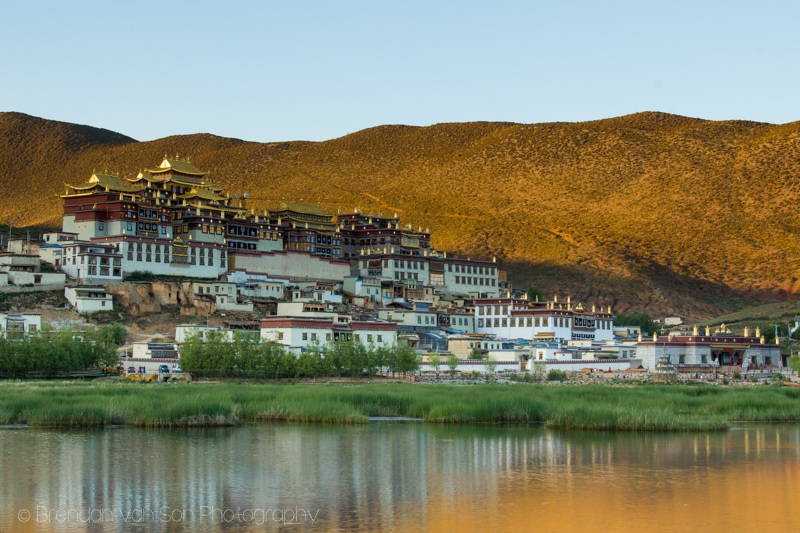 Loved the reflection and the glow on the mountains behind the temple. 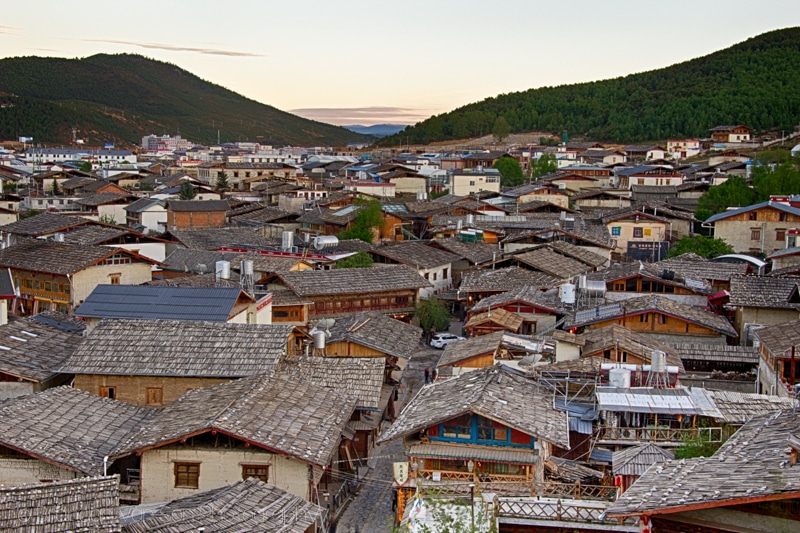 This is the side of Old Town that was restored after the January 2014 fire in Shangri-la.

This is the photo I showed you how to develop in the video above. Such great light! 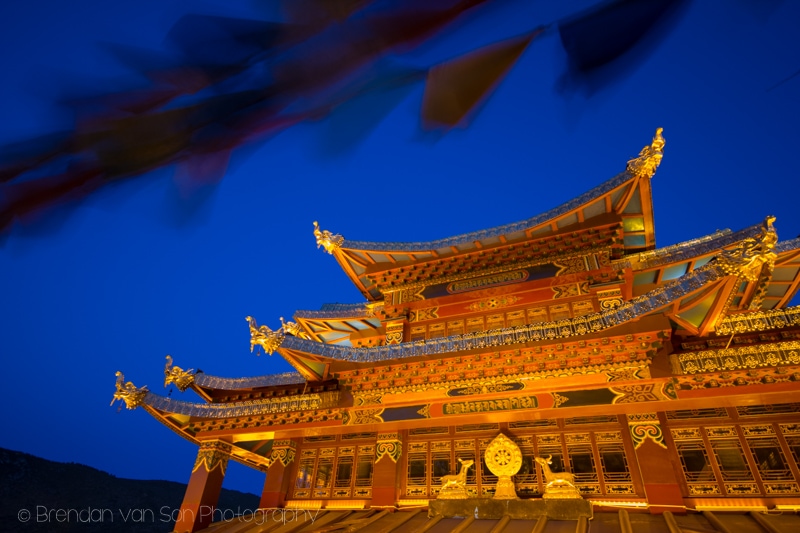 Up on the hill in Shangri-la, this temple was perfect to shoot with the prayer flags blowing in front of it. 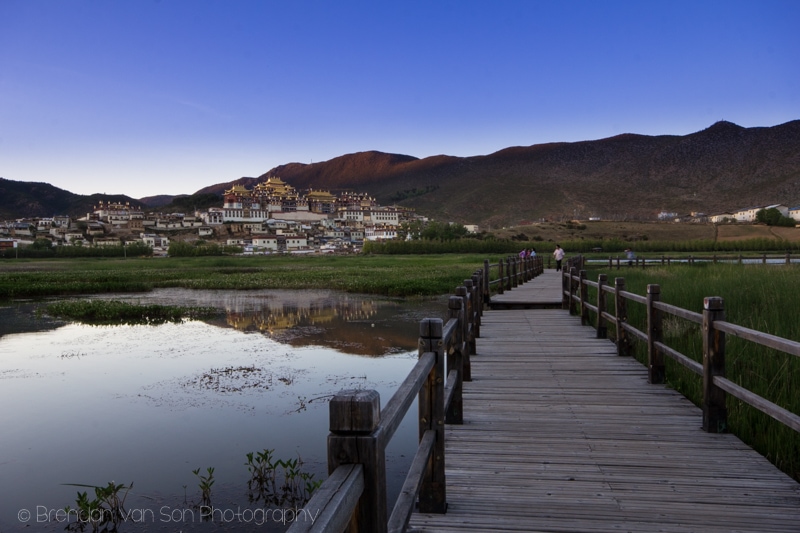 I think this was my favourite shot from the evening shoot. The light was just right on top of the hill behind the monastery.