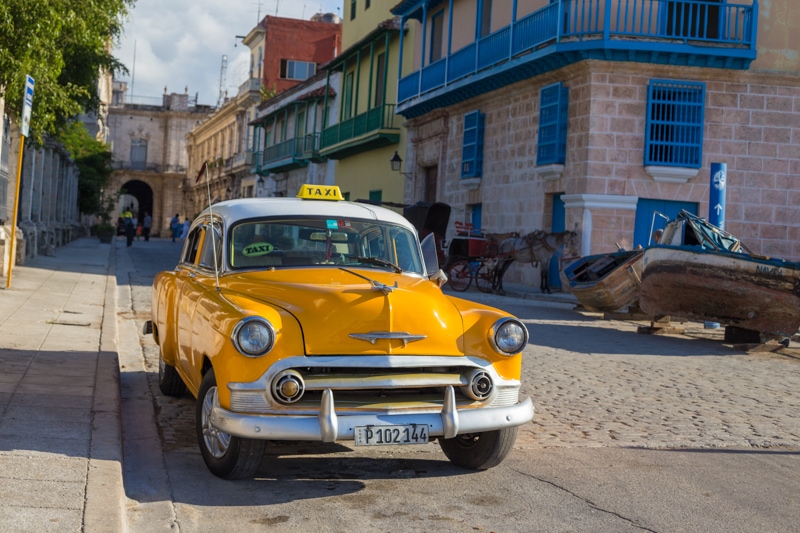 I made it to Cuba! It’s actually such a strange feeling. I’ve never been anywhere like Cuba before, and that’s an awesome feeling for someone who travels so much and is always looking to get back that sensation of being completely overwhelmed.

I jumped on board a tour with Intrepid Travel to try to get Cuba sorted out a bit. I wanted to figure out how everything works before setting off on my own for a bit of solo travel. I think that if you’re going somewhere you know nothing about, and don’t really understand how travelling a place works, it’s a great idea to jump on a small group tour like this for a while before then heading out on your own. It allows you to pick the brain of the guide, get your feet wet, and gain some confidence before setting off solo.

Anyways, this video and article are from my first couple days in Havana and then joining the tour to head out of town.

The old town of Havana is a bit of mind-explosion. One second you feel like you’re in a war zone with destroyed buildings, then you walk a block and feel like you’ve stepped back in time. There are some beautiful plazas, some wonderful old architecture, and some completely dilapidated buildings. It was definitely a bit strange at first, but the old town is full of charm. I absolutely loved experiencing it.

Of course, you’ve got a ton of these beautiful classic cars roaming the streets, too, which is really fun to see.

The truth is, on my trip I only planned in one and half days in Havana. After spending my first day, I knew that I didn’t plan for enough time here.

The Art of Fuster In the Suburbs

After heading out of Havana, we made our way to the suburbs of the city. We stopped in a really cool neighbourhood created by Jose Rodriguez Fuster and is almost Gaudi-esque in its style. Basically, he and almost everyone in the neighbourhood have tiled their houses, their properties, and even the bus stops. It’s a pretty cool place, and definitely unique.

That Strange Feeling of Being Lost to Time

Arriving in Havana was strange. It did feel a lot like being back somewhere in Central Africa in some ways. But then, it began to feel extremely unique. It is almost a sensation like I’ve come back from the future to visit the 1960s, and every now and then a sliver of modernity has seeped through with me.

The lack of internet, cell signal, and connection to the outside has been the blessing, though. I really feel like it’s forcing me connect more with the local setting and Cuba itself rather than being glued to whatever has gone viral on the internet. I have also found myself using my free time more productively. I have been writing far more than I used to. I’d be lying if I said I miss the connection that always having internet gives. But, I’m not sure how long I’ll love it.

Here are a couple more images from Havana that I shot both at the start and the end of my trip with Intrepid.

I’ve got another video or five from Cuba. I’m with Intrepid Travel for eight days and our next destination is Vinales, which is meant to be spectacular. Stay tuned for that.