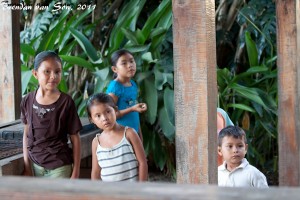 For most, a road is a simple path that connects one point on the map to another. It describes a means of going from one place to another with relative ease. However, for many places in the less developed world a road can mean so much more than that.

In Gabriel Garcia Marquez’ famous novel “100 Years of Solitude” through the eyes of his characters he speaks of a road. The construction of such a road that will bridge not only a physical distance but a cultural and social distance. Because, in the end, a road really is much more than a simple stretch of pavement, gravel or dirt that connects two locations. A road is a generator of change. In the interior of Guyana, a road was constructed about 20 years ago and to this day the adjacent communities are still working at how to deal with the changes that have arrived along with it. 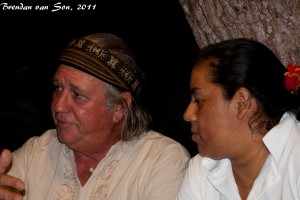 Colin Edwards and his Wife

In 1989 the construction of a road brought British expat Colin Edwards to Guyana’s North Rupununi, but what he couldn’t have imagined is the change that this construction would bring not only to the communities along the road, but himself. Colin worked on this road that would connect not only the interior of Guyana to the coast, but also Guyana to Brazil. When the road was completed he settled down in the area and established the fantastic Rock View Resort on the plains of the North Rupununi. Over the near 20 years he has been there, he has seen the changes that have come along with the road he helped construct, both good and bad. 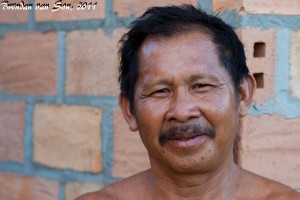 It seems we have a connotation ingrained in our minds that all development is good, but the truth is that with all great changes there are hardships, misuses, and some things that just don’t fit. When we think of the rural areas of underdeveloped countries we often think of them in a primitive way, as if they are missing out on what the rest of the world already has. But the truth is that most of the developing world’s urban dwellers would be fine, and some argue better, undeveloped and living in rural settings.

The transition that many of these people face in moving from a subsistence economy to one governed by cash is one of the most difficult. In the developed world cash rules.  What would the average “westerner” do without cash?  Money is synonymous with wealth in our world.  In the developing world we have to ask, who is richer the family without a single penny who grows their own crops, milks their own cows, and raises their own their on chickens and has food at all times, or the family that earns 5 dollars a day and struggles to earn enough to put food on the table? The struggle to earn cash begins to overwhelm people not used to living in such a way. 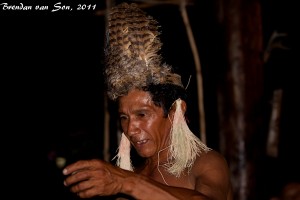 Of course the road has not only brought people here, but it has taken people away. Teenagers see the road as a way to escape from the land of tradition and agriculture to the world they see through their newly delivered televisions. A world of fast cars, bright lights and excitement. And who can really blame them for wanting to leave. But how can their traditions, lands, and cultures be preserved, if everyone leaves.

It is almost inevitable that a road will also bring greed along with it. Along the road new motorcycles roll, flashy trucks drive and the latest electronic imports are displayed. Desires for personal goods can often culminate in obsessive greed and desire. The road brings the amazing features of the modern world, but it also brings with it the evil and the obsession with possesions.

For me a road relays a dream. When I stand in the middle of a dusty red road my eyes look down the path in curiosity. I can’t help but wonder what lies down that road, and I can’t help but to walk it. A road to those who have never seen one before means so much more. It means an increase of opportunity, a connection with a generally unknown world, and curiosity about what lies beyond the previous confines of rural life. 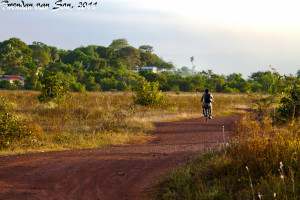 Yes, a road can bring a wealth of difficulty and adjustment as the people attempt to mould themselves to fit our blueprint.  However what we often forget – and what this road has taught me – is that this road actually means that we too have the opportunity to learn from those we meet at the end. We have the chance to understand their way of life, their successes, and the beauty of their world. All too often we worry about what affect we as travellers are having on the world, when it is really what were learning from the world that we should concern ourselves with.